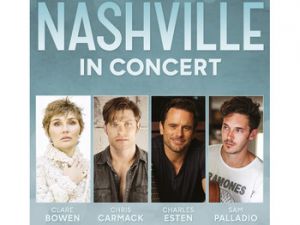 Nashville In Concert has given fans across the pond a rare opportunity to see some of the stars of the show live in intimate venues across the country for the past few years now.

Back in March at the Country to Country festival rumors started circulating that a tour here was imminent and sure enough an announcement was made a few days later. The tour would take Charles Esten (Deacon), Clare Bowen (Scarlett), Chris Carmack (Will) and Sam Palladio (Gunner) across the UK. Tickets sold out within hours of going on sale, and despite many people saying the prices were too high extra shows were added in London due to demand. I was blown away with the amount of love people seemed to have for a TV show that focuses so heavily on country music, proving the genre has found its place in the UK music scene.

I went to the Symphony Hall in Birmingham which was the second night of the tour, it’s a beautiful venue and seats around 2,000 people. I felt incredibly lucky to have a seat in the third row and I knew it was going to be an exceptional show. Opening to resounding applause, Chris Carmack kicked things off with ‘What If I Was Willing?’. This started a series of rounds which featured one or more members of the Nashville cast performing a mixture of songs from the show, covers, and originals, before handing the stage to the next artist. It is worth noting that many of the originals which were played are as yet unreleased (including a few which had been debuted at the Grand Ole Opry), so we really were getting something special.

After setting the pace, Chris introduced our own Sam Palladio who sung ‘Can’t Get It Right’. He seemed genuinely happy to be on home turf with some of his American friends. Clare Bowen brought out her fiancé – Nashville based guitarist Brandon Young – for a moving rendition of ‘Longer’. Before singing she talked about how so many good things have come from being in Nashville but the most beautiful thing was him. They clearly have a strong bond and it shines through on stage. The rest of the show was a non-stop musical journey of beautiful songs and captivating lyrics, interspersed with amusing and highly moving personal stories from the cast, and more than a little audience participation.

Returning to the stage, Charles Esten sung a personal favourite of mine: ‘I Know How To Love You Now’, a song which he wrote for Deacon to sing on the show. After earning himself what was surely the loudest applause of the evening, Charles welcomed Chris back to the stage to sing “one of his favourite Will Lexington songs” ‘I’m On It’. He told the audience that he’d been backstage trying to remember the second verse of the song, but thankfully it came off without a hitch. He went onto sing one of his own songs called ‘Pieces Of You’ which he debuted at the Grand Ole Opry, before welcoming Sam back to duet on ‘Heading For The Fire’ – another original song. Leaving just Sam on stage we were treated to a sneak peak of season 4 with ‘Count On Me’ – a song that Gunner writes for Scarlett as she’s going through a hard time.

A member of the audience shouted “where’s Scarlett?” and Sam assured us she was coming, and soon enough Clare came back on stage to sing ‘My Song’ after which she asked Chris to “bring out his funny trumpet” (a saxophone) before singing her original ‘Premonition’. Rounding off the first half Charles leaped into the crowd for ‘Like New’ before getting back on stage to sing the emotional ‘When I Cry’ joking that many of his real life songs have been inspired by Rayna.

Chris and Sam opened the second half with ‘If It’s Love’, a cover of bluesy number ‘Sweet Little Angel’ by the late B.B King, and a beautiful song called ‘She Dances’. Well into the swing of things, Sam Palladio performed ‘Wake Me Up In Nashville’ which is a poignant ode to his Granddad who served in the US as a fighter pilot in the war. What made the moment all the more special was his grandparents being invited on stage leading to cheers from the audience plus a standing ovation. After such an emotional moment Clare reappeared, herself and Sam throwing it back to the first season with fan favourite ‘Fade Into You’.

It was Clare’s turn to move the room, with a heart-felt recounting of how she and her brother saved each others’ lives, most recently by Clare donating as much bone marrow as she could to aid her brother’s recovery from cancer. She told us that she felt left out with her family so far away, especially after the other members of the cast had had their families at various shows. Given her brother’s recovery, the beautiful

‘Love Steps In’ was too close to her heart to write so Brandon Young and Justin Halpin wrote it for her family. It was no wonder she got a little emotional giving a truly memorising performance, falling to the floor in gratitude when the auditorium filled with thunderous applause. Fighting back the tears she had the room in the palm of her hand singing ‘When The Right One Comes Along’ with just a guitar as backup.

Bringing Charles back out they lightened the mood with ‘Hand To Hold’ and ‘That’s Alright Mama’ before Clare walked off stage waving to the audience as she left. Charles sung ‘Cold Comfort’ an original which was only written a month or so ago, before going into his final song ‘He Ain’t Me’.

Welcoming Chris, Clare, Sam and the band back on stage the encore included ‘One More Song’ and ‘A Life That’s Good’. The room was illuminated with the bright lights from a sea of mobile phones while people sang every word along with the cast; it was a beautiful moment. Itis clear to me that the cast of Nashville have earned their spot both on screen and on stage, proving they are not only actors but incredible artists in their own right. They were extremely grateful for all the encouragement and support they have received from fans of the show, and their fondness for each other shone through the entire evening’s performance. Having found a new home on CMT (Country Music Television), hopefully now the show will get the recognition it deserves, and the characters and music we have grown to love will be kept alive for many years to come.