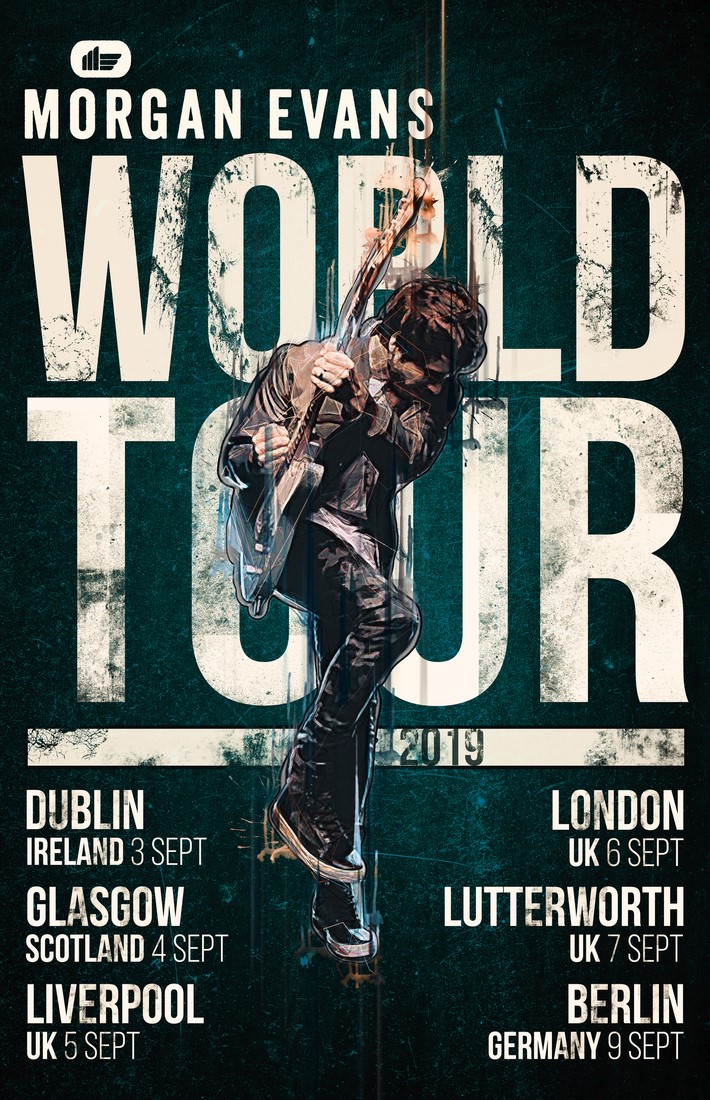 A breakout Country sensation in the U.S. and beyond, Warner Music Nashville / Warner Bros. Records’ MORGAN EVANS is extending his international reach with the announcement of six shows in Europe this summer. Showcasing his “eclectic musicality” (MusicRow) and “phenomenal solo set” (Rolling Stone) overseas, the Australia native is set for five headline dates across multiple cities and a top-notch festival appearance at The Long Road in Lutterworth, U.K.

Tickets will be available starting Friday (3/29), and can be purchased via MorganEvansMusic.com. The performances mark a return to the U.K. for Evans, who has built a fan base across the pond with previous headline shows and a 2018 appearance at the widely popular C2C Festival in both London and Glasgow.

Fans will be tipping back drinks and singing along all summer to Evans’ Top-40-and-climbing single “Day Drunk.” The global smash spent 25 consecutive weeks at #1 on Country radio in Australia. Additionally, the track spent 2 weeks at #1 on the TMN Hot 100 airplay chart, making Evans the first Country artist to achieve this feat since 2009 when Taylor Swift reached the top of the chart with “Love Story.”

“Day Drunk” follows Evans’ #1, GOLD-certified debut “Kiss Somebody,” which has amassed nearly 85 million total streams. Both songs are featured on his debut U.S. album, THINGS THAT WE DRINK TO, lauded by Rolling Stone as “a truly revealing debut, both personally and artistically.”

With a Top 10 album, chart-topping singles and appearances on some of Country music’s hottest tours, Evans is one of the genre’s most exciting up-and-comers to keep an eye on. Named to PEOPLE magazine’s coveted “Ones To Watch” list and dubbed “the Nashville sensation,” he has been recognized by MusicRow Magazine as one of 2019’s “Next Big Thing” artists and spotlighted by Billboard, Rolling Stone, Pandora, SiriusXM and more.

ABOUT MORGAN EVANS:
Praised by Rolling Stone as “a savvy performer with strong songwriting chops,” Australian-born rising Country artist Morgan Evans is celebrating the release of his debut album, THINGS THAT WE DRINK TO (Warner Music Nashville), out now. The project features his #1 debut U.S. single “Kiss Somebody,” as well as chart-rising follow-up “Day Drunk.” Forging a path as one of the genre’s up-and-coming stars, he has been named to PEOPLE’s elite “Ones To Watch” 2018 list, MusicRow Magazine’s “Next Big Thing” 2019 list and spotlighted as an emerging artist by CMT, SiriusXM, Pandora, Rolling Stone, Billboard, Bobby Bones, The Tennessean and more. An award-winning Country force in Australia, he recently reached new heights by topping both the Aussie Pop and Country charts with “Day Drunk.” Previously sharing the bill with Taylor Swift, Chris Young, Cole Swindell, Old Dominion and more, Evans completed his 10 IN 10 TOUR, performing 10-straight shows in 10 days including SOLD-OUT headline dates in Los Angeles, CA, Atlanta, GA, and New York, NY. He recently wrapped his run as direct support on DAN + SHAY THE TOUR, and will hit the road with Rascal Flatts for the SUMMER PLAYLIST TOUR later this year.