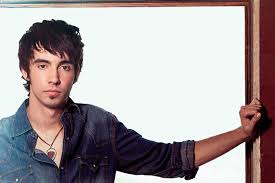 Mo Pitney has been on a UK tour visiting Bristol, London, Nottingham, Leeds, Manchester and Brighton. I had the opportunity to meet with Mo before his gig at The Brighthelmstone Promotions gig at The Prince Albert in Brighton. His tour is a really family affair. He brought his wife Emily and daughter Evelyne with him to Europe. His brother and father managing the tour and production. His sister can be heard singing with him on his album Behind the Guitar released in 2016.

I was invited to the sound check  and afterwards sat down with Mo.

Kate:  I believe that this is your first trip to the UK and Europe. How have you enjoyed it so far?

Kate: How did you enjoy Harvestfest in NI and Eire?

Mo: I had a great time in Ireland. It was very well done. The other acts were good and the audience were good.

Kate: For Harvestfest you had your band but for this tour it’s more of an acoustic songwriting style event.

Mo: I just love to share the stories behind the songs and to play intimate audiences who are just there to hear the music .They are some of the best audiences I have ever been in front of from a songwriter type show.

Kate: We’ve only really had these opportunities fairly recently I suppose you can call it the Bluebird/Nashville effect. Are you aware of the C2C festival?

Mo:  Yes I’ve heard a tonne about that and a tonne of people asking if we are playing that I need everyone to put in a good word for us as we’d love to come back.

Kate: What is difference between a US audience and a UK audience?

Mo: There is definitely an audience in the US that really appreciates the purity of the music and where it comes from and that have a desire to really understand the art form, but I don’t think that there are as many in the US as there are as far as I can tell.

To be able to play in this many places and have as many people so intent on listening to what is really happening in a room when a songwriter sings his songs has been really inspiring for me on stage.  Sometimes I can be a little uninspired to play before I go out  but getting in front of these audiences has kinda  pulled it out from us.

Kate: I believe that this is somewhat due to the way we hear/buy our music.  In the US it tends to be radio singles and here we may download from a streaming site but a lot of us also buy the physical copy cd or vinyl. It does mean that we know the whole album rather than just the hits. It’s nice to have a theme to an album and play them in order.

Mo: That will encourage me to look at an album as an entire piece of art. When everything goes to a single based thing it can get you geared to ‘how can we get radio success? It’s been amazing also to see (as you’ve said) them singing back album cuts to me, the more obscure songs you don’t normally get. You normally get your three singles that you have out on the radio that the majority of people sing. We’ve been getting 50% of the room singing to songs that I don’t hardly ever play over here.

Kate: Are there any writers that you would like to write with that you haven’t had a chance to write with or can you choose whomever you want?  I read that you were almost given carte Blanche to choose your musicians and writers.

Mo: I just kept running in to people and I luckily had people around me that just picked up on what I love musically and helped me.  My label and other writers helped me get in the room with people that were connected to my favourite works of art; Dean Dillon, Don Sampson and other great writers in Nashville.  I’m sure there are other writers in Nashville that I’d love to write with but I don’t have any on my mind at the moment, I really have already written with some of my favourites.

Song writing needs to be organic, I like to let it happen and I don’t want to manipulate anything. It’s good to get in a room with somebody and spend a day working out ideas and I like that to be after I have made a relationship with someone. Every now and then I like to try something new and get with somebody I’ve never met before and that’s good. You start a relationship that way but I’ve just been a little more sensitive when and how I write recently.

Kate: I guess it depends on your style of writing and the relationship you have with your label.

Mo: Of course. I’ve had a really good opportunity at Curb Records. They have given me a lot of wiggle room to exercise creativity so I’m able to say I’m very thankful for that everywhere I go.

Kate: I believe that’s quite rare these days it seems the art sometimes gets lost making a record for radio.

Kate: Is there anyone you would like to sing with duet, no not duet as such, collaborate (that’s a better word).

Mo: as far as dreams go I like guys like James Taylor or someone like that. He’s a guy I would love to do something with, of course that’s never probably never going to happen but he’s a been a big influence in my songwriting in a way that’s interesting. I am a country singer and songwriter but I came from a more acoustic… I do not even have the words for it but he would fit in line with what I love.

Kate: You’ve played music and musical instruments from a young age and that’s all you’ve wanted to do?

Mo: It is organic and not staged thing, its not put on. I picked up a guitar and just couldn’t put it down.

Kate:  I prefer the singer songwriters over the singers that sing other peoples songs. For me the passion is not the same if you’ve not written it,  its not your story or your relationship your singing about.

Mo – I’ve realised that all my favourite artists, and I did not know it at the time,  but they wrote most of their music and if they did ever record an outside song it was so undeniable to them that it sounded as if they did write it. They were so intertwined with it they only recorded it because it was as if they wrote it. That’s really important to me.

Mo: Yes we are in the process of that at the moment. Right now we are getting ready to go into the studio.  We have some ideas  for songs that we have cornered and I think for the recording process it will help us determine which ones are going to make it.

Kate: Have you already got a theme for the album?

Mo: Its more about starting to learn the direction sonically sound wise and the lyric theme is something that I am going to home in on a little more in the next coming months.

Kate: Behind that Guitar was growing up, your relationships and up to now. I’m guessing its more I’m here…

Mo: Yes it’s what I’ve learned since then and there has been a lot of struggle and there has been a lot of  ups and downs and fight to grasp the things that are important in life. I know that the root of this next album is going to show up in that way, bad versus what is good and right and true. I don’t know how that is all going to turn out and I probably still have some writing to do.

Kate: Have you managed to write whilst you’ve been touring?

Mo: I have not on this trip. I’ve got caught up on some rest, and done a lot of sight seeing with my family.