THE WEIGHT OF THESE WINGS – ALBUM REVIEW 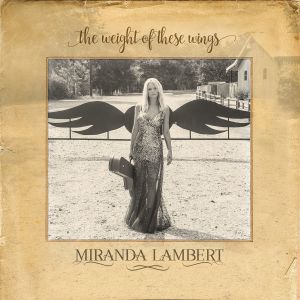 A few weeks ago Miranda Lambert got everyone excited across social media as she announced that not only was she releasing new music…. it was going to be a 2 disc album! The two sides named The Nerve and The Heart respectively.

The Weight Of These Wings seemed an apt choice of title knowing what a tough past year Lambert has endured with her public split and divorce from fellow Country Superstar Blake Shelton.

I knew before I even played the first track that this record would be full of personal songs, drawn from the events from the months before, what I didn’t know is what direction she would take it. Her music has evolved throughout each album and I couldn’t wait to get stuck in to this one to see what it had to lay on the table.

Here we go, first track… in comes a dirty bass guitar with a little percussion and guitar followed by the opening line ‘There’s trouble where I’m going but I’m gonna go there anyway…’. A great opening sentence and almost a hint at the rest of the album because as i progressed through the songs it was clear that nothing was held back.

The first disc see’s cowrites from fellow artists such as Gwen Sebastian, Lucie Silvas, Foy Vance, Ashley Monroe and even a cut with her new man, Mr Anderson East.

Track 3, Ugly Lights is a brutally honest song about the time after her divorce. It talks about being that girl at the bar who even the bartenders can’t stand, the one who doesn’t need another one. For a woman in country music to sing about her flaws in such a way that really paints her in a bad light is a brave move from Miranda but she executed it perfectly. In this day and age I think a lot of people can relate to falling apart and in a world where binge drinking is just a part of society it is reality. Not pretty, but real.

That is followed by a great cover of a 1996 track by Shake Russell called ‘You Wouldn’t Know Me’. One of the few upbeat songs on the album but a welcome addition to ‘The Nerve’.

The first disc also features a solo write from from Miranda Lambert. A song called ‘We Should Be Friends’. She uses the track to describe their perfect person to be friends with her, using that sentiment to mask that every line is a description of her.  The honesty in this album is something I have a lot of respect for.

The first disc also includes a song about Pink Sunglasses worth $9.99…. I sense a new piece of merchandise coming along soon to Miranda’s store! Followed by Getaway Driver, her newest single ‘Vice’ and Smoking Jacket; co-written by Britain’s very own Lucie Silvas!

Pushin’ Time, a duet with her new beau Anderson East, follows. A song which dives into how love can come out of nowhere sometimes and how it can happen overnight even if it seems the timing is wrong. She even uses the date of September 12th in the song…. Could that really be the day the two met? Or did it just fit in well with the song!? The song also seems like Lambert’s way of letting her audience know that she didn’t plan to jump straight into a relationship from the divorce but things just felt right. Melodically and lyrically this is one of my favourite tracks on the album.

From the first song there already is a clear change in theme on this disc. The first leans towards her physical actions and things that have happened to her in the last year that she could control. The second CD opens with the track ‘Tin Man’ with the line

“Hey there, Mr. Tin Man. You don’t know how lucky you are. You shouldn’t spend your whole life wishin’ for something bound to fall apart.”

I personally think it is a great line to start the song off. For me, it instantly caught my attention. To sing about a fictional character that everyone can relate to. The second you hear ‘tin man’ whether you are 5 or 75 you can’t help but think back to The Wizard of Oz and his search for a heart. Joint with the title of the second disc the lyrics are cleverly written and unfortunately many of us can relate to heartbreak.

‘Good Ol’ Days’ has a nice beat to it that helps lift it up from the previous track and as one of the few upbeat tracks on the album you can help but get your foot tapping along. This is followed by ‘Things That Break’ another of my favourite. Again, influenced by the title of this disc, I hear a heartbreak song. About someone who doesn’t know what they are doing in love and just wants to take a step back and stay away from love because they aren’t good around ‘Things That Break’.

Shake it for the bee’s, shake it ‘For The Birds’…. Ok so it isn’t quite that song. Well not that song at all! This track has a very Kasey Musgraves, Brandy Clark feel too it though interestingly neither had a hand in this song! Co-written with Aaron Raitiere the song is essentially a list of things she is ‘for’ and ‘against’! The lyrics are fun and the melody keeps it rolling along! This is followed by ‘Well-Rested’ and ‘Tomboy’.

Next on the listing is ‘To Learn Her’ which has gained a lot of attention by fans, it seems, since the release. I have heard many great comments from various people but the statement that seems to be sticking out is that this is a real country song. A melodic pedal steel guitar brings us into the song and from the lyrics to the melody this wouldn’t have been out of place on the Grand Ole Opry stage back in the heydays of Patsy, Loretta and Tammy.

“To love her, is to learn her”

Miranda is one of the few artists that really seems to be embracing the true essence of country music still along with a handful of great acts on the scene right now. One of those being Ashley Monroe, so it is no surprise that her name appears on the writing credits of this song. Along with so many others I am a huge fan of this track and I would love to hear other artists really bringing back this style of old school country!

‘Keeper Of The Flame’ is another of my favourites… not that it is hard with this album! Another upbeat track and a very catchy melody accompanied by some fantastic lyrics. ‘Bad Boy’, ‘Sic Degrees of Separation and ‘Dear Old Sun’ follow on from this.

‘I’ve Got Wheels’ closes out this double disc album. It’s bittersweet…. Another great track but there are no more songs to listen to! It is however a clever song to end the record on as it is all about even thought things can get a little heavy sometimes she is still gonna roll on, keep on movin’… and with that I guess we just wait for the next album! 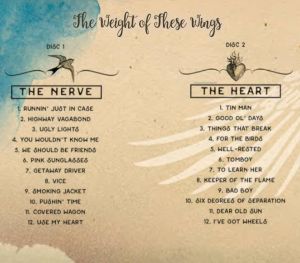 Overall I love this album. I think it is a very self indulgent album and it definitely feels like this is something that Miranda had to release for her but I think a lot of her fans will feel that too and relate to her emotion. I am also very interested to see how this does on country radio, I hope that tracks like ‘o Learn Her’ get embraced by the radio community and it can be pushed out but first it would have to be a single! We shall see how it all plays out.

For those of you who have not yet heard the album, I urge you to go out, buy it, listen to it (in order!) and don’t just take my word for it that it is a great bunch of songs! This album is a true experience from start to finishing from the choices in melodies to the lyrics, a masterclass in songwriting. I can’t say enough great things about this, I hope you can all join me in that!

Tags Miranda Lambert The Weight Of These Wings