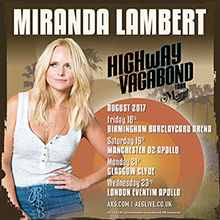 London, Tuesday 15 November: Ahead of the release of her sixth studio album ‘The Weight Of These Wings’, multiplatinum and international award winning country superstar Miranda Lambert announces 4 UK tour dates.

The Grammy winning singer-songwriter will bring her Highway Vagabond Tour to Birmingham, Manchester, Glasgow and London in August 2017. These shows will be a prime opportunity for fans to hear the star perform Billboard chart topping hits such as ‘Mama’s Broken Heart’, ‘Little Red Wagon’, ‘Somethin’ Bad’ as well as new tracks from her highly anticipated new double album.

Turning up the heat next summer, Miranda Lambert is no doubt one of country music’s brightest stars. Tickets for the Highway Vagabond Tour go on sale at 9am Friday 18 November 2016 and are available at AXS.