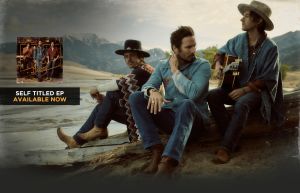 Midlands self titled debut EP released late last year. They are very popular especially with the Think Country team, we almost came to blows over who would review their EP.

Midland are a three piece band formed of Mark Wystrach, Jess Carson and Cameron Duddy. They ‘stumbled’ on playing music together when they got together the week prior to Cameron’s wedding. Signed to Big Machine Records and writing together with Shane McAnally and Josh Osborne their music is a great mix of Texas country meets Nashville slick. Their EP is produced by Shane. Its has a real 70s and 80s feel reminiscent of The Eagles. They do exactly what they say ‘soulful, catchy and accessible music’, ‘George Strait meets The Eagles with gorgeous harmonies and traditional slide guitars.

Their lead single ‘Drinking Problem’ is a play on words ‘people say I have a drinkin’ problem but I’ve got no problem drinking at all’ in their words influenced by Gary Stewart a very clever song written by Midland, Shane McAnally and Josh Osborne.

‘Check cashin country’ lyrics  by Jess Carson is about the trials of being on the road, tearful calls home (don’t cry honey), not staying anywhere just slowing down and not earning much money. Once again beautiful three part harmonies with added mandolin.

‘Burn Out’ again a very traditional style of country song about a broken heart. ‘This old heart’ still about a beaten up heart but looking to the future.

My favorite track is ‘Electric Rodeo’ with Mark’s honeyed vocals and the bands wonderful harmonies ‘We’re painting on our suits and plugging in our boots’…..beautifully describes being on stage in front of an adoring crowd then once the lights go out and the audience leaves you’re alone.

Only 17 minutes of music I’m desperately waiting for the Autumn release of the full album.

I’m sure they’re going to be really successful and popular alongside William Micheal Morgan, Jon Pardi et al with the more traditional sound almost an antithesis of the Bro Country that has been popular the last few years.