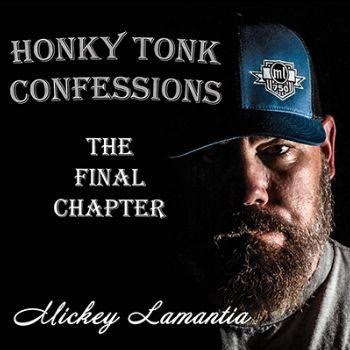 The track list for Honky Tonk Confessions: The Final Chapter is as follows:

The second single from Honky Tonk Confessions: The Final Chapter will be a new cover of the Waylon Jennings song “Ladies Love Outlaws.” This track has a vocal assist from Melonie Cannon and Jamey Johnson.

Mickey Lamantia is a singer/songwriter from Cranston, Rhode Island. He was a state Corrections Officer for 20 years. Lamantia uses his perspective as a prison guard as inspiration for many of his songs and always knew he wanted to be a musician. Lamantia was raised listening to Loretta Lynn, George Jones, Waylon Jennings, Johnny Cash, and Boxcar Willie. Lamantia was discovered while singing a Randy Travis song at a karaoke bar and asked to open a few shows for Willie Nelson. Mickey Lamantia also hosts Whiskey Wednesdays sponsored by Sons of Liberty Whiskey Company on Facebook.  Mickey Lamantia has opened for Jamey Johnson, Mickey Gilley and Billy Joe Shaver.

Matt Stell To Premiere Video For “That Ain’t Me No Mo...