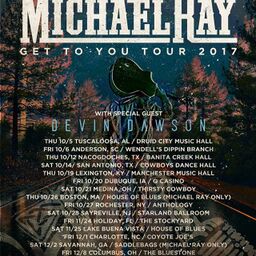 Michael Ray and Devin Dawson made a stop in Dubuque, Iowa last night on their 15 stop, “Get to You” tour. One of the first major tours for Dawson, including opening for Maren Morris earlier in the year, and Ray’s second headlining tour of his own.  There’s always an element of surprise when you go to a venue that you have never been to before, but thankfully the Q Casino had a great facility. The room was much smaller and had a more intimate set up, but the size of the room didn’t change the size of the show. Not a second was left in air time as the two and a half hour show was packed full of fresh entertainment.

Devin Dawson was set to open the show. Usually an opening act is just that. Most in attendance show up late halfway through their set, and a good handful might not even know who the opener is, but this time something was different. Knowing that he had a song on radio but not knowing much about him I was intrigued to hear what else he had in his music lineup and what type of performer he was. I honestly didn’t look him up prior to the show. I went knowing he only had his one song, “All On Me” released to radio. I wanted to go in cold so I could accurately say what my first impression was without any preconceived information. I am so thankful I did. This guy is going places and with the welcomed rarity he brings to the country genre, it goes to show how the speed of the music industry really does eb and flow. He’s making his way out of the woodwork, but not without hard work and dedication, and it no doubt shows in his stage presence.

Safe to say, country music has different genres within itself. “Bro” country, classics, 90’s, etc. Dawson falls into the subgenre of alternative country.  Alternative country brings an element to the table that “bro country” simply doesn’t.  There’s a depth and a richness behind each phrase in each song that tells such a bigger picture, that doesn’t truly come alive until it’s being told set to music. There’s a mysteriousness behind Dawson’s presence that can only be felt at a live show. It leaves the attendee wondering, “what’s else is there to this guys story? There is more to the story, right?” It’s craft like that, that leaves fans wanting more of the music that allows them to fall into the story and not just experience the song but feel it too. His setlist was comprised mostly of songs that are available online off his upcoming album, Dark Horse, but he also included some not yet released tracks off the upcoming project, again, leaving us wanting more. Dark Horse can be pre-ordered on his website or on iTunes, here. Spotify fan? No worries, you can checked out his tunes there by clicking, here. Obviously it’s not required that you preorder his album, but you just should. Because, wow. You can guarantee there will be an album review on this one because I’m going to be playing this one on repeat. The set of the night only left one thing to be desired, and that would be to hear more music.

Born and raised in California, just a stone’s throw from the famous Folsom Prison, Dawson set his sights on his music passion six years ago when he made the move to Nashville, TN.  Attending Belmont University for Songwriting, he began to emerge with songs he wrote himself, with the band he’s been with since he got there. He says the band you hear on the album is the band you hear on the stage. There’s a camaraderie there that even the most unobservant concert attendees can see. Signed to Warner Music and beginning to set the ripples of the waves that will be his musical career, Dawson has his debut album, Dark Horse set to release on January 19, 2018.

Next up in the evening was the man of the night himself, Michael Ray.  Not only does Ray have a heart of gold, but he’s a gold selling recording artist himself with two of his singles hitting the mark, “Kiss You in the Morning” and “Think a Little Less”. Those who follow country music closely know him for his number one hits and the subsequent songs that accompany those tracks on his self titled album, released in 2015.  With sales that hit the gold mark, especially for someone newer to the country spotlight, Ray has made his place in country music and he’s not going anywhere. Not if his female fans have anything to say about it. While yes, it’s not difficult to look at him at all, his songs are also deep with meaning and each tell a story for whatever situation one might need a song for.  It’s no surprise they paired these two to go on tour together, but the fit is fantastic as their styles echo each other, yet they each maintain their individual identity with their own stories set to music.  The Warner artist who comes from Florida, leaves no nonsense on the stage. When it’s time to perform, he’s in the zone.  Bringing the energy, engaging with the whole crowd, and still emphasizing the emotion he feels behind the songs he picks to sing for the crowd.  Make no mistake, when attending a Michael Ray concert make sure to bring the energy. It’s okay if you don’t though. He’ll bring it for you and then you’ll catch it, and you’ll be up to speed. There wasn’t one moment in the show that resembled a slow down. Between songs he would speak about the song briefly but even doing that, in his own actual story telling he drew the crowd in with his words and passion for what he was speaking about and then the next thing you knew we were back to the music.

An appreciated comment of the night by all, was his willingness to share that he’s not a fan of all the political BS that’s everywhere. What he does believe in though, is the United States military and those who have served or are serving, here and internationally.  Not a military veteran himself he shares he has friends who took that call, and when he sings about the military he’s singing about all of them, those he knows and those he doesn’t.  The song he sang in dedication to them last night, “Drink One for Me” has an even more special meaning to it since the massacre in Las Vegas. Ray shared he sang there just a few days before that fateful night, and this song not only encompasses all the military but all the first responders who were there that night, and who are all over, always working to protect us all, so we can enjoy shows like the one he was putting on for us.  There was a sense of solidarity in the room as he sang this ballad.  Some crying as the words hit them personally, some cheering during appropriate times of pause in the song, and some just remaining still and taking in the emotions of the moment.  He toasted the crowd and the crowd toasted in return, the most appropriate expression of gratitude from a room full of people with the same message, “thank you”.

As previously mentioned, the golden artist has a heart of gold himself. Whenever there is a charity event that he can be involved in, if it logistically works out, you can guarantee he’ll be there.  In August, he performed at a St. Jude benefit in Nashville called Guitar B Que. In June, during CMA Fest week in Nashville, he took part in Craig Campbell’s Celebrity Corn Hole Tournament, bringing awareness to Colorectal Cancer and the importance of getting screened. When he’s not in Nashville helping charity efforts, he takes it on the road with him. According to his website he recently partnered with Zappos the shoe company, to start his own project to help animal shelters all over the nation, in the cities he stops in. It’s called, Wrigley Cares.  In each city he performs in, he has a box set up, and whatever gets put in in the box gets donated to a local animal shelter in need, that Zappos helps find and then facilitate the donation to. If you needed further proof that he’s involved in his own community and those everywhere, just upon visiting his site two out of the top three stories under the “news” section on his website are related to his charitable involvement. They could be about anything, but that just shows what type of person he is.

Ray finished off the set with David Lee Murphy’s, “Dust on the Bottle”. A 90’s classic that most everyone knows, and everyone sings along to, no matter your age. He got a little help with this one as Dawson came back out on stage to finish off the show with him. He wrapped up with his most recent, top hit, “Think A Little Less”. As the house lights came back up, people started to descend to the meet and greet line, where they were both about to meet and greet the fans after already putting on a action packed evening for all.  There wasn’t a swoon left to be had in the room. Not one fan was left out that was stage front the whole night. He engaged with each and every fan, and not just those in front. He was able to reach back three and four rows deep at some points. High fiving, shaking hands, grabbing phones to snap selfies, oh yeah, and performing a concert. Never once did he miss a beat. It’s evident that his hard work and determination have paid off, and he’s not about to let that get away from him. He gives his gratitude to his fans, for allowing him the opportunity to do what he does. Ray doesn’t command the stage by simply standing on it, he commands the stage by owning it. When you go to a Michael Ray show, you don’t just watch him perform and hear his music, you experience it.