Mark Wayne Glasmire has a new release CD Titled “Can’t Be Denied”. Have you heard of him? I have to admit, that didn’t until now.  He has performed with the greats such as Al Stewart, Kathy Mattea, Gordon Lightfoot, Guy Clark, Tracy Chapman, and so many more. The influences of these greats are heard in his album, however Mark absolutely has his own style. I always listen and watch an artist’s music and videos many times over to get the feel and the essence of what they are all about. The first time out, I got a very “Jimmy Buffett “ feel, smooth caribbean, beachy tone. Onward to listening again and again, it felt much more than just that. Mark wrote the songs himself and with collaboration from great songwriters and his personal friends. I was interested to read in his Bio that he grew up in Bethlehem, Pa, attended college and graduated with a degree in Business. It was just on a suggestion from a girlfriend while in college that he attend an open mic session at a local coffeehouse and do some performing. That’s where the music bug got him. Funny how life takes you in a different direction. Mark decided that music was the way he was going, not business. He picked up his first guitar as a youngster, and had been playing for years, for fun. Onward to Arlington, Texas where he now lives, and of course Nashville! 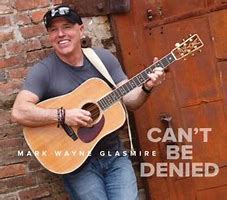 “Can’t Be Denied” the album, is a storytelling, multidimensional, and somewhat biographical about life experiences and will appeal to all. Take the time to listen to it, it will melt your heart. This 12 track  album is definitely gaining attention, and of course . produced in Nashville!

I really enjoyed this album, and MWG, has gained a new fan!! One day, I hope I can see him perform, shake his hand, and say thank you from the bottom of my heart,. I know sounds sappy but this is really something to listen to. I feel like I have a new friend, and we haven’t even met! That is the sign of a great songwriter and performer. Take the time to stream it, download it, and check out his Website at: www.markwayneglasmire.com.

Olivia Lane releases new single “Hey 3AM” ahead of fi...