MAREN MORRIS BRINGS THE HERO TOUR 2017 TO UK/IRELAND THIS WINTER. 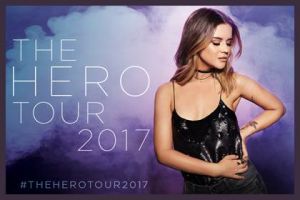 Maren Morris is thrilled to bring The Hero Tour 2017 to the UK and Ireland for the first time this Winter.

The Grammy Award winning musician will arrive in Dublin on the 12th November to start the first of seven dates across the UK, concluding at Sheffield’s Leadmill on the 21st November. The tour will call at London’s Shepherds Bush Empire on the 15thNovember. Support on all dates comes from Ryan Hurd.

Maren Morris was America’s most exciting new breakthrough artist of 2016, rising from an acclaimed country starlet straight into the mainstream with her major label debut LP, HERO. It is a record that is much more than the sum of its wonderfully sculpted parts, and it was HERO’s first single, My Church, that put Maren Morris’ name firmly on the map and out beyond that hugely appreciative country scene that had been so quick to nurture her.

Playlisted at every US radio station that mattered and many more besides, it wasn’t merely a fantastic country song they were playing, but a song that managed to introduce this incredible young Nashville (by way of Fort Worth, Texas) musician to the masses, picking up an award for Best Country Solo Performance at the Grammy Awards in February – one of four nominations for this very special talent.

HERO debuted at number 1 on the US country chart upon release, and nestled itself within the top 5 on the Billboard 200 chart too. Now Maren is ready to take the record global, and following a main stage performance at this year’s C2C Festival at the O2 in London this weekend, she will return to the UK in November for a debut tour.