Going to Country music gigs is now turning into an exploration of London for me, I am going to venues I had never even heard of before, let alone been to previously, Islington Assembly Halls falls into that category!

Bearing in mind my string of bad luck in getting to venues on time recently, this time I gave myself 5 hours to undertake a 2 & ½ hour journey. It worked, I arrived at the venue at about 4,30 – so plenty of time to spare. I waved to the people already queuing & went & got a sandwich & a glass of wine! I then went to the pub to meet friends.

Doors opened at 7.00, so we wandered over at about 7.10, there was a queue so it took a little while to get into the venue, but the time went quickly enough, especially as I kept bumping into people I knew. That is another thing about these gigs, a lot of the same people go, so you are seeing the same faces & getting to know people. We did have to laugh though, there was a couple behind us in the queue who were talking to the man behind them. They said they had been to a ‘Thing at the O2’ a couple of years ago, they couldn’t remember what it was called! ‘Do you mean Country 2 Country?’ I asked. She looked at her partner & asked if that sounded familiar?!?!?! We decided to leave that conversation at that point!

Islington Assembly Halls is a lovely venue, quite small, but not too small, just right for an act like Maddie & Tae. I have to say the first thing we noticed, was all the amount of men stood right near the front! Normally the front is reserved for us girls with the occasional man, not tonight though, it was role reversal tonight & the guys wanted to make the most of it!

The support was provided by Una Healy, formerly a member of the girl pop group The Saturdays. She had a guy on bass & another on keys with her & she herself played her guitar while she sang. She introduced the guys on stage with her & then started with Holding On. Una has a new album coming out very soon, it is her 1st solo album & tonight she showcased it singing several of the songs from it, including Battle Lines, Please Don’t Tell Me and Staring at the Moon, which she wrote for her daughter, Aoife Belle. This was one of the only upbeat numbers in the set. She also sang a very old Celtic Folk song, Black is the Colour. By this point though, unfortunately Una was losing her audience. 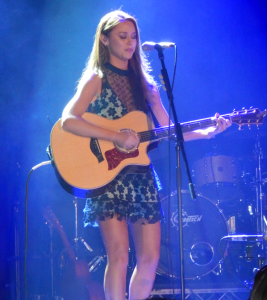 To compound it she then really proved she didn’t know her audience. She asked if anyone watched the TV series Nashville, had we heard of Gunnar, he is English you know! There was a real rumble in the crowd as people were sarcastically replying to their friends, really didn’t know that, it isn’t like we saw him at C2C last year! Now bearing in mind Una has been on tour supporting Ward Thomas & again immediately afterwards with Maddie & Tae, I was personally very disappointed with this condescending attitude!

Una looked stunning, she has a beautiful voice and she told little stories between tracks, but for a set like the one she performed this evening you want to be sat down & chilling out, not eagerly anticipating dancing your socks off. She certainly didn’t win a new fan in me!

After a break of about 30 – 40 minutes the time we had all been waiting for arrived, the band came on stage, with one guy bounding across very Garth Brooks style, then to a huge cheer the girls walked on. Madison Marlow and Taylor Dye, better known as Maddie & Tae are 21 years old and have been friends and songwriting together for 6 years. For 2 girls so young, wow they know how to put on a show.

They started with Shut Up & Fish to a roar of approval. Maddie then thanked us & said that this was their 1st UK tour & they couldn’t believe it included a sold out show in London. Another roar of approval from the crowd! No Place Like You and Right Here, Right Now followed. It was obvious the girls were having fun, they were amazed we knew all the words. Maddie said they were going to hang out with the crowd after the show, this will cause some consternation as there were an awful lot of people at previous shows who were disappointed that they didn’t hang around afterwards, but there is no law saying they have to! We have been spoilt (especially by Kip Moore) and unfortunately some people now seem to think that is the norm and get annoyed when it doesn’t happen. However, we have paid to see the artist perform, not hang around afterwards! Anyway, I digress! 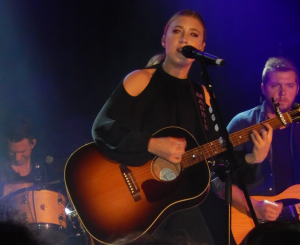 Waiting on a Plane was next followed by a song the girls wrote sometime back, but which hasn’t yet been released or recorded. I think it was called Boomerang, but I am rubbish at guessing song track names, I even get them wrong when I know the tracks! There was a very strong fiddle presence in this track & just in case we hadn’t noticed, the guy came forward between the 2 girls at 1 point. 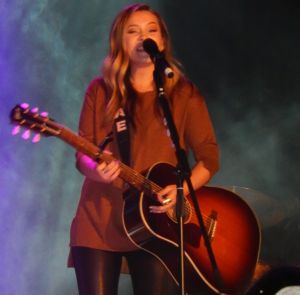 Maddie said that after C2C this year and the reception they received, they decided they had to come back & they had to do a proper UK tour and as soon as they got home they started to plan it.

There is a 2nd album in the making and a track that will be on it was next. Mirror Mirror is about figuring out you have got nothing figured out! The audience was enthralled and were singing clapping & arm waving with gusto! Towards the end of Fly, Tae said ‘You all sound beautiful, thank you for knowing the words, do you think you can do it on your own?’ The response? Another huge cheer! The Band started to play the chorus again, including Maddie & Tae, but they didn’t sing, they kept quiet. The audience sang the words, loudly and clearly!

Both the girls put their guitars down to sing Children Get Older. Maddie then said ‘Spoiler alert, we are coming back next year!’ Another roar! Downside of Growing Up and After the Storm Blows Through followed. Maddie (who seems to do most of the talking) said that the latter song was written for a friend of theirs who lost her father. They didn’t know what to do or say, so they wrote the song for her, Tae said it is what we do and why we get on stage.

The girls were handed their guitars back & I suddenly realised Tae is left handed! I hadn’t noticed that previously! Not that it matters! Tae said that the next song was a rarity as it was the only love song they have ever written, We Are Going To Get There, this was followed by Smoke. After Your Side of Town Maddie pointed to a man in the audience & said that he was awesome as he was holding his glass in his mouth so that he could clap!

The band were then introduced. Maddie said that when she & Tae wrote together, sometimes they filtered what they thought, but occasionally they didn’t, the next song was one that they didn’t filter, the crowd cheered guessing correctly that Sierra was next. When they finished Tae said ‘I have just realised I am wearing a heart necklace!’

They then sang a cover of Umbrella, by Rhianna. Tae’s guitar was handed back & Maddie took up a Mandolin for their last song – Girl In A Country Song. Once more the crowd were singing heartily! The girls and the band then left the stage. This did actually cause some confusion with people asking if that was it? Did they have anything they hadn’t sung from the album? Were they going to come back. The door to the stage opened & yes, they were back for an encore which was met with much enthusiasm!

For the encore they sang another new one coming from the album and then a song that they said they wished they had written, it was the Dixie Chicks Cowboy Take Me Away. For this last track Maddie & Tae stood with the band all in a row.

For me I was really looking forward to seeing Maddie & Tae at C2C this year, I had hoped for them the previous year, but Girl In A Country Song hadn’t long been out, so it wasn’t yet known if they would be one hit wonders. Their performance at C2C was great, but their performance this evening was superb. The girls personalities shone through, they had fun, they enjoy what they do & it showed. They worked really well with the boys in the band & I loved the way they all stood together for the last song, it is as if Maddie & Tae are saying look, we can’t do this without you! They engaged with the audience, often pointing to someone & smiling, waving or winking. It was a very polished performance, but not at the expense of their personalities and I cannot wait for the 2nd album.