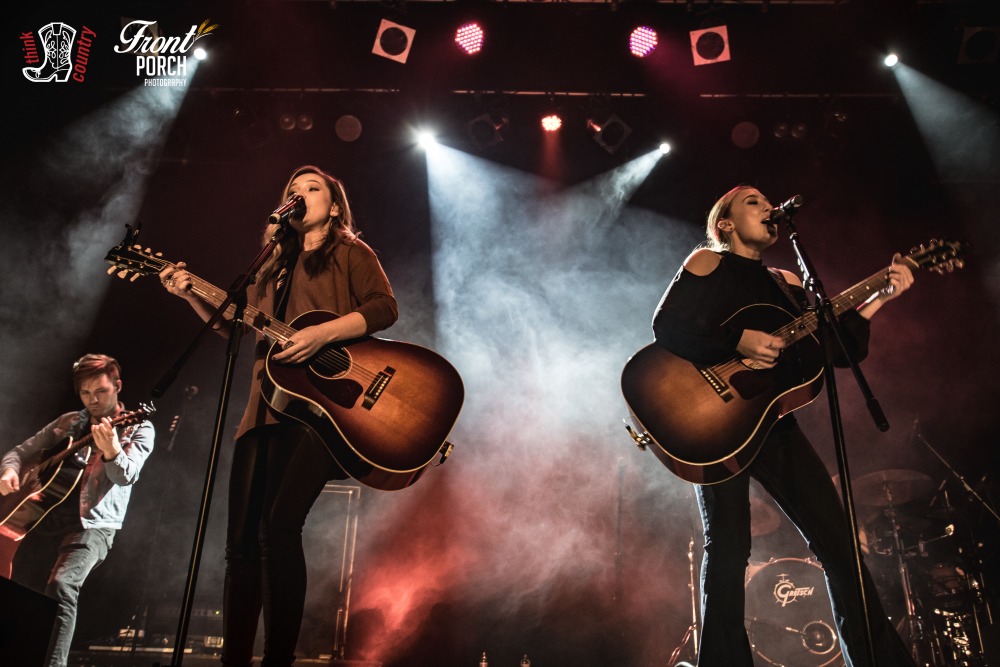 Maddie and Tae played a sold out show at London’s Islington Assembly Hall on Wednesday night as part of their first ever UK tour.

After their appearance at C2C Festival in March, i was excited to see their own show. Coming on stage armed with a guitar and a mandolin, and backed by a full band, Madison Marlow and Taylor Dye kicked off the night with ‘Shut Up and Fish’. It took a few songs for the sound engineer to get the mix right but was already shaping up to be an incredible show.

“It’s the biggest compliment as a songwriter to have people sing your songs back to you” Maddie said, as they made their way through a setlist of self penned songs from their debut album ‘Start Here’, released in 2015, as well as a cover of Jana Kramer’s ‘Boomerang’, which they also co-wrote.

There are a lot of Maddie and Tae songs that are relatable to me, and that’s why they are one of my favourite female artists. From the reality of moving out of home ‘Downside of Growing Up’, to the empowering ‘Fly’, to helping a friend deal with the loss of someone close ‘After The Storm Blows Through’, these were just as stunning to hear live. I also love brand new song ‘Mirror Mirror’, which is about not having everything figured out.

It’s lovely to see an artist looking as happy on stage, and as overwhelmed and humbled by the audience reaction as Maddie and Tae did. They referenced a few times how the way they were treated at C2C had made them want to come back, how they loved that UK audiences knew all the words to all the songs, and most importantly, “spoiler alert” that they can’t wait to come back next year.

The main set finished with a bunch of up tempo songs to end a fantastic night. ‘Your Side Of Town’ and a cover of Rihanna’s ‘Umbrella’ included lots of audience singing, dancing and clapping. There was definitely some kind of satisfaction hearing them play ‘Sierra’ to a sold out international crowd. Finally debut single ‘Girl In A Country Song’, the tongue in cheek response to bro country, was the perfect finish.

Coming back on stage for the encore, they performed another brand new song followed by a Dixie Chicks cover. Slightly risky move for an encore, but it worked so well. The new song had the audience cheering right from the first note. The show was worth every penny and I can’t wait to hear album number two.