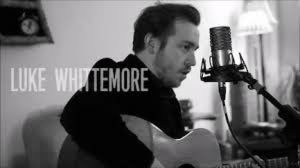 Luke opened up for Barna Howard and Andrew Combs on Friday 2nd September 2016 in Corby. His set was a beautiful, soulful journey of Americana charm and I got to have a chat with him afterwards…

CG: So far this year you’ve opened for an impressive list of artists including Sam Outlaw, Cale Tyson & Andrew Combs. Seems like life is being good to you so far….how have you enjoyed it?

LW: This year has been really great for me. I’m a genuine fan of those three you have mentioned so to be able to promote my own record and be on the same bill as those guys is a real privilege. The crowds are always very supportive too.

CG: Your debut EP, Northern Town, was released in June. How’s the reception been?

LW: I’ve been getting some really good response from the record. Getting your name out there for a debut is always hard, never mind it being an EP so my label have been working very hard alongside ARK PR who have been running the press campaign for it. But we have had great reviews with them still rolling in so in all, really happy with how it’s going so far!

CG: You describe yourself as ‘Chief Storyteller’. What’s the inspiration behind the stories on your EP?

LW: The ‘Chief Storyteller’ was always more intended for my two girls. Bedtime stories are my forte at home! The inspiration behind the EP is not too dissimilar in that they’re stories, a mixture of fiction and non-fictional. I like to find new ways of writing material, most of the time, I find writing before the music suits me to be able to come up with something remotely poetic.

CG: How would you describe your music and sound? Americana/folk/country? Who are your musical influences?

LW: It’s definitely in the realms of the Americana brand of country music. A bit rough around the edges but with plenty of soul. As long as I can get the soul of the music across and people can connect to it, then it works for me. I would have to say that Bob Dylan’s music was a major turning point for me. His music just opened up a whole new world for me, going way back to early folk and blues to the whole Psychedelic boom in the 60’s I just got completely immersed in his music.

CG: What inspired you to become a musician?

LW: My Dad mainly, he has worked in the industry for as long as I can remember so it was the natural course to take, I spent a lot of my childhood sleeping on a two seats pushed together under gig bags in workingmen’s clubs whilst my Dad was playing. Which probably has something to do with why I write as much as my own music as possible!

CG: What do you think to the current American country ‘Nashville’ scene?

LW: There’s some great music coming out of Nashville, some connects with me and some of it doesn’t, same with everyone but more importantly, there’s a ton of music coming out which doesn’t necessarily hit the press and that’s where I keep my eyes. There’s a lot of controversy around at the minute which, unless you’re in the centre of it all then you never really know what goes on.

CG: While we’re on the subject of other music, what’s your verdict on the UK country music explosion? Have you got any favourite UK acts?

LW: Obviously, I’m really happy about it and that people are starting to latch on to it again! People like Bob Harris. He has always been a great ambassador for everything country. I know he’s a big part of the Americana music association here in the UK. There are a few really great artists I have seen on my travels, Daniel Meade is fantastic! I also recently discovered Laura Oakes. She was opening solo for David Ramirez in Sheffield and played a really great set.

CG: If you could choose any song writer – who would you most like to co-write with?

LW: I have never really been in to the idea of Co-writing but I know it seems to be what a lot of people are doing. Maybe I’m missing something… Willie Nelson is writing with a few people recently, Maybe I should give him a call!

CG: What’s next after this EP? Are you working on new material?

LW: I’m just about to start working on the new album. I’ve been working a lot more with my band recently so it’s definitely going to have more input from those guys than Northern Town had which I’m really excited about.

CG: What’s the one song you wished you had written?

LW: Probably the one cover we put on the record. So Far Apart, which was written by Dawn Sears, Jimmy Miles and Steve Oliver. It’s just a simple, beautiful song.

Find out more about Luke: