On Wednesday, FSA Presents, brought Luke & Mel to their hometown of Manchester, on their co-headline tour with Northern Irishman, Gary Quinn, who himself, calls the city his home. Over 60 people were in attendance, to the upstairs ballroom of Gulliver’s, in the Northern Quarter for a great evening of UK Country Radio and British Country Music Association winners and nominiees.

Opening the evening, was the electric and recent UK Country Male Singer of the Year Winner, Thorne Hill. With the beautiful Donna Marie and the talented Scott German on guitars, Thorne took us through tracks, from his currently BCMA nominated Album of the Year, No More Holding Back. Quite possibly the soundtrack to most of the audiences UK festivals of this year, we had no trouble in remembering our participation for ‘Put Your Hand In Mine’. Another 19 attendees joined the evening, via Sue Bell’s always appreciated Facebook Live videos, for the treat of Robbie Cavanagh joining for backing vocals on a song! 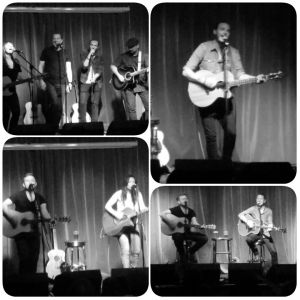 I am very grateful to Thorne Hill for sitting down with me before his set and excited to have our conversation, written for Think Country, up soon!

After the powerful Thorne Hill, came the stunning Robbie Cavanagh. Also hailing from Manchester and having recently been a nominee for UK Country Radio Male Singer of the Year. His ever stunning simplistic sets of him, his acoustic guitar and his haunting vocals had us captivated in a room where you could literally hear every footstep! Personal favourite of mine, Love Will Be the One to Let You Down’ builds beautifully from slow to powerful and I hope something of this style features on Robbie’s mentioned New Album for next year!

Twice BCMA award winners, Luke & Mel, took the stage next, running through there award winning songs and current nomination for UK Song of the Year, Bad Habit. A firm favourite within the UK scene we got to enjoy Luke’s guitar solos and Mel’s gravely vocals on covers such as My Church, fiesty vocals for Little White Church and then a beautiful slowed down version of Ring of Fire. The tour is the last we’ll see of them this year, as they focus on new music, of which they showcased Misery and the track I’m eagerly awaiting Save It. They closed the set with a flashback to C2C, where they gained great audience participation for Enjoy The Ride.

Having been on the scene for nearly 6 years, winning multiple awards and recently releasing his new EP I Remember, which reached #5 in the UK iTunes Country Chart, Gary Quinn finished the night. Flipping from his new EP, to his previous album, Gary showcased some heart pulling lyrics and heartfelt reflectiveness including a beautifully stripped cover of Desperado. A great jam with Luke on guitar also, to Keith Urban’s Days Go By and his fun, witty and cheeky tracks such as On Your Way Out and I Love to Watch You Leave cement the reason why Gary is often quoted as just what the UK Country Music scene needs!

The guest artists for all nights of this tour have been superbly selected, in my opinion, showcasing just how fantatsic the British Country Music scene is right now! ( Lee 🙂 )