Well it was all about love this past holiday season! Between Christmas and New Years a few of country’s hunks and darlins’ had big announcements to share with their fans. First to break the silence, Kelsea Ballerini was proposed to by her aussie boyfriend and country newcomer, Morgan Evans after a 9 month relationship that blossomed before her adoring fans. Evans and Ballerini met earlier in 2016 while hosting an Australian Music Awards. Evans made sure he called Dibs and the pair have been seen exploring his native homeland. 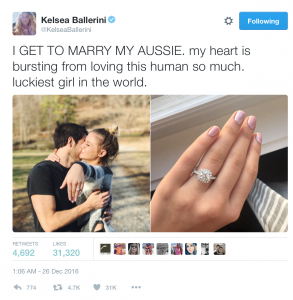 A few states down and in her childhood bedroom, singer/songwriter Ruston Kelly popped the question to Kacey Musgraves. Musgraves stated in her instagram post of the ring, “I didn’t say yes…I said HELL YESSSS!! Last night, the best man I’ve ever met got down on one knee in my little pink childhood home..in the same room I played with my ponies and barbies and asked me the easiest question I’ve ever been asked. ❤ I finally know what everyone means when they say ‘you just know.'” The pair first displayed their relationship on social media back in July, some may say it was quick but when you know you know! 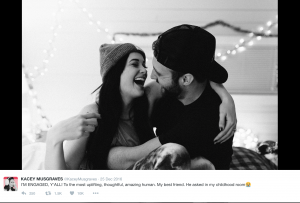 Country crooner and newcomer William Michael Morgan finally “met a girl” and popped the question to girlfriend and country royalty Jennifer Wayne (granddaughter of the late John Wayne). The couples sweet relationship was displayed all over their social media and we’d agree with the majority that the pair is the sweetest around! 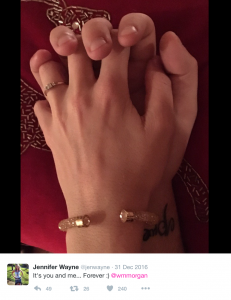 After the release of long awaited new music, it was announced Sam Hunt too was indeed engaged to on again off again girlfriend Hannah Lee Fowler. The woman responsible for the melodic magic, heartfelt emotions and heartbreak in his debut album Montevallo, Hunt took the high road in releasing an “apology” in the lyrics of his “Drinkin’ Too Much“.

And strangers hit you up on social media

I’m sorry you can’t listen to the radio

And you’ve got nothing to say to me

To these songs you gave to me”

I foresee this being Hunt’s next hit.. 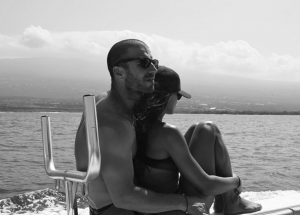 First comes love, then comes marriage, then comes the baby in a baby carriage! Thats right- baby news was announced by Ashley Monroe on Christmas day. Monroe and husband (Atlanta Braves Pitcher) John Danks will welcome their first child later this year. Seems Monroe will be “On To Something Good” this year! 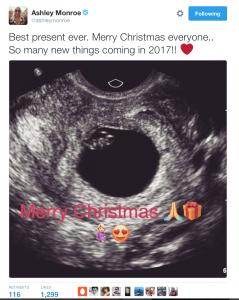 Congrats to our newly engaged and soon to be parents from all of us at Think Country!