I did suspect I may had bitten off more than I could chew on the lead up to Little Mountain 2017. Our first year was a one day event and having felt the success of our first festival I was hungry to expand and had decided on a 3 day event for this year….

I wanted to give the festival a slightly different format so I decided to theme each day.

The Saturday should be a day of bands, big sounds on a big open air stage with the very best variety there is in the U.K. From the Americana sounds of Robbie Cavanagh, the Nashville bro country sounds of Journey Home and TC Country, the more traditional country sounds of Lars Pluto and the Reavers, Amy Westney and The Most Ugly Child, The Bluegrass tones of Little Folk and Izzie Walsh and the more edgy country rock sound of The angels with dirty faces….. and some local hillbillies in harmony Blue Genes. 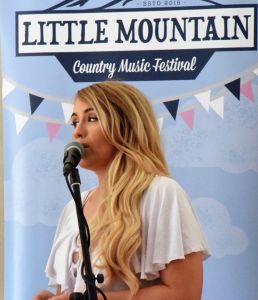 Our Sunday should have subtle acoustic vibes in a more intimate setting. It should be all about songwriters, the real heart of Country music. These sessions are always a real treat for true fans who crave more of an insight into how the music came to be. This was also a day of firsts, first time I’d seen a loop pedal at work in a songwriters session with Jay Johnson, first time I’d seen my favourite outlaw Lars Pluto perform a set without his band and seated (minus snake hips), first time I’d heard Stuart Landon sing some Waylon, first time most people had heard the subtle tones of a talented young Matt Sayers, first time we had seen Emma Jade Garbutt perform her own original material, first time some had heard the gritty Americana tones of Roni Perry, first time I’ve heard Ash Copper dip his trucker hat to the 90’s classic ‘ breakfast at tiffany’s and a first time highlight…… Megan Erica Lee’s very first solo set singing her own material.

To say our little lady smashed it is an understatement, a crowd of people in tears, in complete awe of her talent was the crowd reaction. This was a huge milestone in this humble 14 year olds musical journey. Having co-written the majority of Megan’s material to see her deliver the songs by herself without having the other members of Blue Genes there to provide a safety net was emotional and one of my proudest moments as a mother and as a mentor.

This had always been the plan, cocoon her in a family band to let her grow and then gradually let her take flight. Although Blue Genes is nowhere near done, with a brand new EP almost ready for release Megan has taken her first steps to a bright solo career, watch this space people. With her father’s musicianship, her mother’s vocals and her confidence in who she is as an artist Megan Erica Lee will be a name you’ll want to remember. All in all Little Mountain was a huge success! And 2018 could be even better, there has also been talk of some very interesting spin off events. So as the sunshine set on our beautiful Welsh mountain we may be done for one year but we are far from over. Thank You to all those who attended, supported and performed.