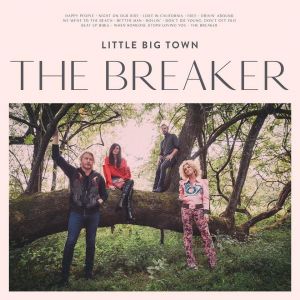 Little Big Town welcome their eight studio album. The new album is called The Breaker and includes 12 tracks one of which, already radio released and one other due for release.

Kicking off the album is, Happy People a light yet catching song, with a subtle beat that is accompanied by soft vocals, when we are led in to the chorus it makes you want to sing and clap along to the song, therefore its title being successful indeed a highlight of the album and at only 2:47 in total, it does well to create such impact, thumbs up!

Night on our side, is straight in their with punching harmonies, something this band are the award winning at! The tempo is turned up slightly and includes a bit more depth in sound, which comes well in choice from previous song and is a welcome addition in track listing.

Another feel good addition is Driving Around, a sharp introduction and flawless harmony by the Little Big town girls, has you feeling the lyrics and structure immediately. The hook that is the chorus, and the extended emphasis on ‘Cruise’ and ‘Sky’ works well and personally echo’s back to the feel of their song ‘Pontoon’ it has the ability to have you instantly drawn in and it leaves an impression on you. A possible, track to be added to a summer playlist.

Better Man is their most recently released single and was written by Taylor Swift and has topped US hot country songs and US country airplay #1, it is a powerful song, a song of which people will relate too, it has a really well filmed music video for it which features the band playing different roles. This is certainly another top track for me on the album.

Throughout this album what is evident is what good pace and flow and consideration they have taken to track listing, when a slower tempo track is in place it is followed by a punchier number and that is apparent that straight after ‘Better Man’ comes ‘Rollin’ it has a edgy rocking guitar riff and sits well within this album.

‘When Someone Stops Loving You’ is a beautifully written song, it captures the essence of what everyone goes through, in break ups and relationships, I really enjoyed listening to this song and I feel it was creatively written and it empowers emotions retains your attention throughout.

Featured last on the album is the title track, it is a perfect ending to a great album and includes a playful melody,  a perfect way to end.

Another perfectly delivered album by the group, it includes a variety in style and tempo and did not loose my attention in any way, I thoroughly enjoyed listening to it and would certainly keep it within easy reach and would highly recommend it.