Tickets Go On Sale Friday 10 February at 9am 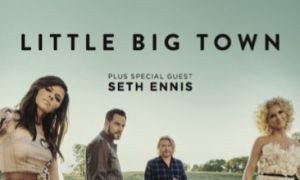 Grammy Award-winning country group Little Big Town today announced their return to the UK for six live performances starting September 2017. Kicking off at Manchester’s Albert Hall on Thursday, 28 September, the band will make its way to Birmingham, Gateshead, Glasgow and Bristol before wrapping their UK run at The Royal Albert Hall in London on Thursday, 5 October. Breakout country newcomer Seth Ennis serves as the opening act for all six dates. Tickets go on sale at 9am on Fri 10 February at aeglive.co.uk. The tour is presented by C2C, Live Nation, and Regular Music.

Praised for their flawless “silvery vocal harmonies” (The Guardian) and their “irresistibly upbeat” (Rolling Stone) style, Little Big Town stole the show at last year’s C2C: Country to Country music event. In addition to the award-winning act’s live prowess and effortless on-stage chemistry, fans have embraced Little Big Town’s latest single, the Taylor Swift penned “Better Man,” which currently holds the Number One slot on Billboard‘s Hot Country Songs Chart. “Better Man” is the first single off of the reigning CMA and ACM Vocal Group of the Year’s seventh studio album, The Breaker, out February 24. The Breaker is the country quartet’s highly-anticipated follow-up to their studio collaboration with Pharrell last year, Wanderlust (2016).

To pre-order The Breaker, visit Http://umgn.us/LBTBREAKER .

Little Big Town-consisting of members Karen Fairchild, Phillip Sweet, Kimberly Schlapman, and Jimi Westbrook – first entered the music scene more than 18 years ago with hits such as “Boondocks,” “Bring It On Home,” “Good As Gone” and the Grammy-nominated single “Little White Church.” With albums Tornado and Pain Killer, they have seen massive success with #1 singles “Pontoon,” “Tornado,” “Day Drinking,” and most recently the history-making, best-selling country single of 2015, with “Girl Crush.”

In October of 2014, the group fulfilled a career milestone and lifelong dream when Reba McEntire asked them to become the newest members of the Grand Ole Opry; two weeks later, they were inducted. Little Big Town has earned almost 40 award show nominations and in the past five years has taken home nearly 20 awards, including multiple Grammy, CMA and ACM awards, and an Emmy award. They are the reigning CMA Vocal Group of the Year and recently won the same award for the fifth consecutive year. At the 2016 Grammy Awards Little Big Town won “Best Country Group/Duo Performance,” and “Girl Crush” received the honor for “Best Country Song.” The group recently received honors from the Academy of Country Music for Vocal Group of the Year and Vocal Event of the Year with Miranda Lambert, and the group was also recognized with the Crystal Milestone Award. At the recent Billboard Awards Little Big Town and “Girl Crush” were nominated for Top Country Song as well as Chart Achievement Award, and the group was also honored as the 2016 Music Business Association Artist of the Year.

Little Big Town recently released their new single “Better Man,” which is currently Top 5 on the country charts and #1 on the Billboard Hot Country Chart. “Better Man” is the first single off of the group’s forthcoming seventh studio album entitled The Breaker which is set for release February 24, 2017. On the same night, the Ryman Auditorium and Little Big Town will kick-off the historic venue’s first-ever residency, “Little Big Town At The Mother Church.”  For more information, visit LittleBigTown.com or follow them @littlebigtown.

Arista Nashville singer/songwriter, Seth Ennis, is poised for a breakout in 2017, with early nods as a star on the rise being named as one of SiriusXM’s “Future Five” and an artist to watch by CMT, Pandora, The Huffington Post, Rolling Stone Country and a CMT “Listen Up Artist.” The 24 year-old multi-instrumentalist, co-wrote, co-produced and played all parts on the recorded version of his debut single “Woke Up In Nashville.”

The Georgia native is set to join the Florida Georgia Line Dig Your Roots Tour, the Tim McGraw & Faith Hill Soul2Soul World Tour 2017, the Billy Currington Stay Up ‘Til the Sun Tour and Luke Bryan’s Huntin’, Fishin’, And Lovin’ Every Day Tour. Ennis will make his UK debut later this year at C2C before returning to the UK with Little Big Town in September. For more information, including all tour dates, visit sethennis.com and follow Seth via Instagram.com/Seth_Ennis , Facebook.com/SethEnnisMusic, and Twitter.com/SethEnnis. To purchase his debut single “Woke Up In Nashville,” click here.