Flashback to two weeks ago where Manchester got to spend the night at iconic venue Night and Day Cafe being entertained by a supremely talented Canadian gal and an Englishman.

Jake Morrell, a 28 year old Englishman, kicked off the show! Discovered previously by Mr Dermot O’leary, Jake started off the set by asking the audience “Am I Heading For Heartache?” as he burst into the first song of a six song set Heading For Heartache. Letting his music do the talking just him and his guitar he played every song from his recent EP ‘Englishman’ with the ever so catchy track perfectly ending his set. This is the standout song of the set for me written with the Grammy winning writer/producer Kipper, the song references some other country legends songs like Man I Feel Like A Woman and outlines Jake’s memories of his road to being discovered but the irony in the song is he didn’t need to travel the world to write a country song. It’s a very cleverly written catchy lyrical masterpiece of a song that even if you don’t know the words you can’t help but hum along anyway.

Now if like me you have been following Lindsay’s social media especially Instagram you will see all the hilarious stories highlighting the travels and life lessons she has been teaching her right hand girl Taylor Kelly on Tay’s first trip to the UK. Although she had been making a name for herself on Lindsay’s socials it was Taylor’s turn to shine as she stormed the stage to warm up the Mancunians for Lindsay’s arrival.

Flying straight into her first song of the set Champagne she tells all the female fans in the audience she has been single for a while now and she wrote this one for all her single ladies out there who can relate to the lyrics expressing how a girl should be made to feel and telling the fellas in the audience to pay close attention to the lyrics of how a girl really wants to be treated. Girl power was in the house with all the ladies singing along to the lyrics ‘You make me feel like Jessica Biel, Steppin’ out of the stretch, Diamonds hugging my neck…’ Yes it was totally clear Lindsay really knew how to engage and get the audience going right from the second she stepped foot on that stage! 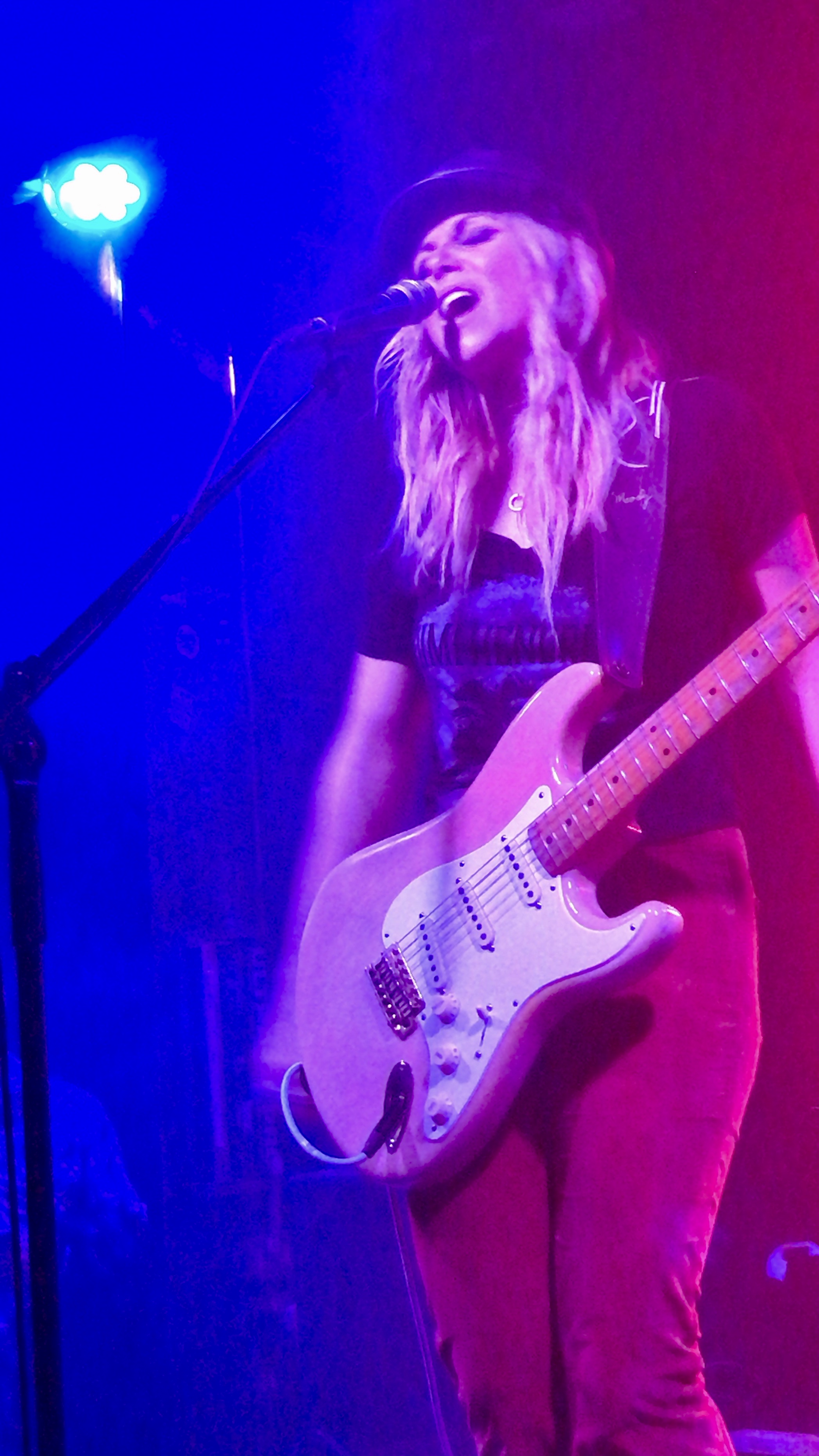 Before she broke into the Keith Urban duet ‘Horses’ Lindsay told the audience all about her struggles before flying to the UK as her gear was stolen including all the stuff she needed to play her sets in the UK! Like most people would choose to, she could have cancelled the gig but not one to let her fans down she kept her spirits up and showed what a trooper she is by choosing an alternative fix of downloading a drum kit app on her phone and using this to continue with her UK shows! Genius! I mean I have been to soo many gigs and I have never witnessed such a fantastic improvisation by an artist, it was truly amazing and shows just what an incredibly talented performer Miss Ell really is.

Continuing her set we got to see her sing a number of songs from “The Project” album and her version of ‘Stop This Train’ by John Mayer. Switching between showcasing her crazy guitar skills and tweaking the beats on her iPhone drum app paired with her stunning vocals there was no doubt about it, the audience were being completely blown away by this fantastic show! The one thing that always amazes me with this girl is no matter how many times you see her live you never find yourself getting bored whether its the insane guitar skills she possesses or her incredibly unique vocals which draws you in, she always manages to make you feel spellbound to the point you can’t help but fixate on her on stage and watch the talent pour out of her while having your mind completely blown and this show was no different! This triple threat artist really is the true definition of a STAR!