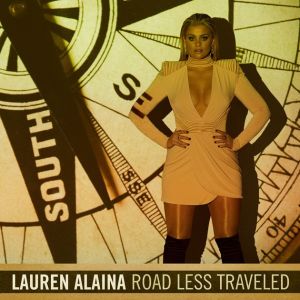 Over five years have passed since Lauren Alaina’s debut offering “Wildflower” was released and she’s had her fair share of ups and downs in life throughout that time. Over the past three and a half years has seen her work on her sophomore release, ‘Road Less Traveled’. She had written over 300 songs for the project, and picked just 12 of her favourites to be included on the album.

“I’m not ok but I’m gunna be alright, for the first time in a long time, I’m doin’ fine” she freely admits on opening track ‘Doin’ Fine’. Giving an insight into her parents’ divorce, lyrically I feel it could’ve fitted onto ‘Wildflower’. The song was written alongside Emily Shackleton and is a good starting point for the record. Life as a musician equals lots of time spent on the road, ballad ‘Three’ is Alaina’s story of missing key moments in her families lives for “three minutes on the radio” it’s one of the early highlights on the album for me. Title track ‘Road Less Traveled’ was written alongside pop star Meghan Trainor. Peaking at #13 on the Billboard Country Airplay chart, it’s her highest charting single to date. The song is one of two to focus on body image and despite opening with a banjo, the track is more pop than country. Here she encourages the listener to “wear out your boots and kick up the gravel” because your weight and dress size doesn’t define who you are.

In contrast, the moving “Pretty” lyrically details the struggles Lauren faced whilst battling with an eating disorder. It is however sung with optimum, and is a track that will hopefully discourage her fans from going down the same path. The sweet ‘Think Outside The Boy’ sounds like it would’ve fitted onto one of Taylor Swift’s earlier records. Lyrically it see’s Lauren telling a younger woman not to base her entire life around one boy because it could lead to heartbreak and disappointment later down the line.

In between the serious subject matters however, there’s some upbeat, fun tracks, which show us a completely different side to Lauren – ‘My Kinda People’, ‘Crashin’ The Boy’s Club’ and ‘Next Boyfriend’ are examples of this.

The stand-out moment of the entire record is a track called ‘Same Day, Different Bottle’. It’s been in circulation for a number of years prior to the release of the album – and is probably the most personal to Alaina. It’s a heartbreaking plea for her Father to stop drinking and is sung with such raw emotion. She wishes she could “turn that whiskey into water” and has described the song as her therapy.

Overall ‘Road Less Traveled’ is a must for your music collection. In some ways it feels like it should be considered her real debut album, and she should be proud of the piece of art she’s created.