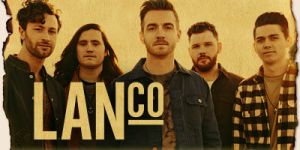 Rooted in the southern storytelling of Country music with the modern punch of rock & roll, ‘Hallelujah Nights’ serves as LANCO’s coming-of-age debut album, confirmed for release worldwide on 19th January 2018, including CD & digital formats in the UK, and is available to pre-order now. Equal parts nostalgic and forward-thinking, lead singer Brandon Lancaster wrote all eleven songs and found success breathing new life into universal themes. Simultaneously, LANCO’s first-ever #1 ‘Greatest Love Story’ – certified Gold in the US – reigned at the top of the Billboard Country Airplay chart for the last two weeks of November, and remains in the top five on that chart, as well as on Hot Country Songs (which blends radio play, sales and streaming data).

“We all go through more of the same experiences than we realise and songwriting is a process of observing those moments,” said Lancaster. “Our stories have different people, different names, different places, but they all have the same emotions attached to them. It’s not fantasy-related. To me, this album is about glorifying the reality of life.” Fans can experience a first taste of the new music off ‘Hallelujah Nights’ with a four-song video trailer.