Kristian Bush chatting with Annette and Patti of Think Country 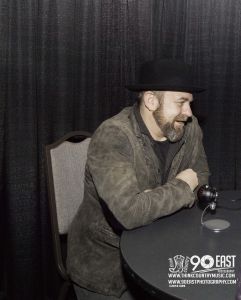 Think Country had the chance to sit down and talk with Kristian Bush, an outstanding solo artist and now, reunited with Jennifer Nettles and one of country’s most beloved bands, Sugarland.  It was, without question, one of our favorite interviews during CRS 2018.

Kristian Bush was the very first person to ever play at London’s C2C: Country 2 Country, which might be an interesting piece of trivia for our many UK Think Country followers, and it isn’t something Bush has forgotten.  “I was the first act, on the first day, on the first show, and it was my first solo performance, which I think is kind of cool.”

Time was limited, but we had so many things to try and squeeze in, so we got right to it.  We asked about the latest Lindsay Ell album, “The Project”, which Bush produced.  The album has been doing really well and it’s always good to hear things from the producer’s side.  You could just see the joy in Bush’s eyes when this topic came up.  “I am excited for her.  I am SHOCKED at how well it was received.” 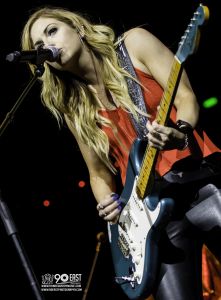 When we mentioned how proud he must be as a producer, his eyes lit up and he said, “So proud, and just proud of her for what she’s done.  The job of the producer, it’s like a mystery.  Nobody really knows what they do, they’re like directors for films.  You don’t really know what they do, but like, everyone thinks they’re like, really important (laughs), and you try to figure it out a little bit on the side.  The way I try to produce records is from the perspective of an artist.  It’s a unique thing for her.  It’s my job to hold the light for her, and how you hold the light, or the way that you do it, translates to the artist’s choices.  I don’t know, I’ve been making records since I was 13 years old and I’ve learned along the way what matters and what doesn’t.”

Of course, what’s on the mind of most country music fans right now when it comes to Kristian Bush is the grand reuniting of Sugarland, so we had to hop on that train.  When asked directly how it feels to be back with Sugarland, Bush says, “It’s exciting.  I’m in the middle of making the record, producing it as well, and writing it.  So, I’m touching my feet to the ground long enough to be here.  It’s exactly when and where it’s supposed to happen, I can tell.  Had it gone earlier, we probably wouldn’t have the songs we have, had it gone later, we probably wouldn’t have the drive or the excitement.  Like, there’s a sweet spot.  There’s a perfect timing for everything that’s happening and the more I trust it, the more it reveals itself.”

Think Country asked, “How is the transition from being a solo artist back to being in Sugarland going?  Does it feel very different?”  Bush replied, “For me, it doesn’t.  The collaborative process is something I keep doing, whether I’m producing a record or like, I recently did a musical.  I’m really good at being in a relationship.  So, a lot of times, the solo experience is one in which I’m staring at myself in a mirror talking to myself.  It’s kind of a funny thing, but it’s given me a lot more peace and centeredness and an ability to have confidence in not only what I do, but how I do it and why I do it.  So, I’m bringing that back to the band.” 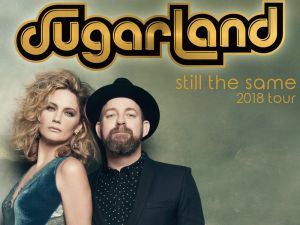 Fans were rather lukewarm in their response with the initial announcement of the lineup for C2C in London, but when it came out that Sugarland was added to the bill, suddenly people went crazy.  It’s apparent that not only will the fans be blown away by the band, but we think Sugarland themselves are going to be amazed by the good reaction of the fans.  We passed this opinion on to Bush and with a smile he responded by saying, “I hope so.  I can’t wait.  Especially since everyone kind of knows.  We haven’t done it for C2C.  We toured over there before they even cooked up the idea for C2C.”  Annette Gibbons, our UK arm of Think Country (and fearless leader), mentioned that she remembers seeing Sugarland in London in the days before C2C.  Bush said, “We couldn’t believe anyone showed up to those shows.  We rolled into Shepherd’s Bush and we played, and it was sold out, and we were like, “Where did you come from?”

We learned that Sugarland is working on their new album at the moment and the timeframe for its release is “as soon as they can get it, they want it, so I’m working as fast as I can”, according to Bush.  He says he’s working fast, but not so fast that he’s sacrificing quality.  “It’s more like 5 am mornings and working until 2 at night.”  He added, “I joke with my brother, I called him, because my brother’s been on every record I’ve ever done, and he got worried about me last week, he’s like, ‘Are you okay?’, and I was like, ‘I think I’m okay’, and he’s like, ‘Well, look man, you’ve been training for this since you were 13. So, this is your Olympics, go for it, jump, you’re not gonna fall.’ So, yeah, I’m okay.”

We talked about Sugarland’s upcoming tour.  Was it going to be crazy?  I have to tell you this, if there’s a more positive guy in the world of country music, I’ve yet to meet him, because Kristian Bush immediately answered with, “It’s going to be a beautiful thing.  The first show I think, is the first C2C show, of the entire thing.  We’ll then roll all the way through until the end of the summer, early fall, and that’s as far as we thought, months ago, when we had to come up with an idea.  So, I don’t know.  I have a feeling that the album, like a good anything, the art will lead the commerce.  I think it would be short-changing it to look further until you hear the music, and then you can attach your rope to the highest, fastest jet that you want.  I’m all for rockets and things and I love to communicate with the most amount of people is my rule.”

It’s a question all artists get asked over and over, but surprisingly, the answers really do vary. “Do you like being out on tour, out on the road?”  Bush was quick.  “I love it.  People singing the stuff back to you… the beauty of the music business is, if I do my job right, I’m so excited about it all the time, hopefully it will unjade you.  For some reason, if you have a callous in that part of your heart, just because you work in the business, or you’re a music fan and you’ve been let down or something too many times, the reason we wanted to start that band, the reason I even want to work with new artists or anything, is because I believe that it can be awesome all the time.  You’ve just got to put down the places where you got hurt and leave them somewhere.”

This was the point where we all had to stop and take a moment to talk about positivity and how Kristian Bush radiated it.  It was my first CRS and Annette had told me over and over how much I was going to love chatting with Kristian because of his attitude.  It can’t be easy keeping such a calm, happy demeanor with all that he has going on, in one of the most insane businesses in the world, right?  Wrong.  He doesn’t fake it folks.  This is so authentic it couldn’t be faked if he were an Academy Award winning actor on the side.  He’s the real deal.  Bush talked about people that wake up before it’s light out to get the job done and how those people are really dedicated.  He said he does it a lot because he’s a single Dad and he has to get up to take his kids to school, but he thinks about the people that help him.  The people that help him get his luggage to the airport and such.  He said, “Whatever water those people are drinking, that’s the water I want to drink.”

The sand in the hourglass was running out rapidly, so we moved on to our fun questions.  Celebrity bars in Nashville.  If Kristian Bush were going to open one, what would it be all about?  He gave it about 10 seconds of thought and said, “Well, deep down, I’m a classy man and deep down in my heart I’m not a guy who’s going to sit around and drink cheap beer, I’m a martini guy.  It’s a cocktail bar that’s going to have drinks served by beautiful tattooed ladies that might also cut your hair.  In the back there might also be a barber shop, and probably twice a week there’s a burlesque, super classy.  (Annette piped in that she wants to manage this bar) I want that when you sit down, I want the leather to feel right.  I want you to sink into it.  My joy right now, if it’s not on a beach, is in that place.”  We asked what we’re going to call this bar and he didn’t know yet and told us we could work on that.  I guess now we have homework via Kristian Bush.  Always more on the to-do list…

Very last question of the interview.  Since we are Think Country, what makes Kristian Bush “Think Country”?  “Stories.  When I hear stories, when I hear people tell their stories when I’m near them in line or when they come up to me and I listen to them or they tell me online.  The stories.  To me, that’s country music.”

We thanked him for a simply wonderful interview and naturally we are so excited to hear the new Sugarland album and to see them on tour. 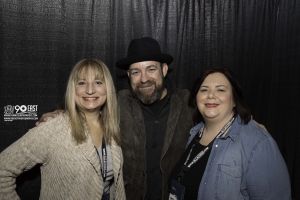