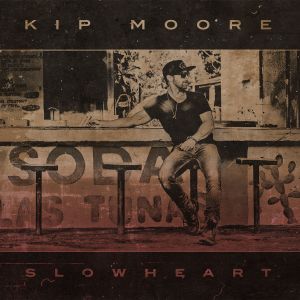 After one of the fastest selling debut albums with Up All Night in 2012 and critically acclaimed follow-up Wild Ones in 2015, fans of the peerless Kip Moore are in for a treat with the release of new album Slowheart. The time he took off between albums, travelling, surfing, backpacking, contemplating life and relationships have brought rich rewards. Like The Cadillac Three’s latest offering Legacy, Slowheart offers a maturity not seen in his previous albums but with all the grit.

The album opens with one of the only two non-Kip penned songs – Plead the Fifth – an up-tempo, rousing track with a catchy chorus. Kip’s unmistakeable, raw, cigarette-tinged vocals make every song on this album sound honest and downright sexy from the off.  Just Another Girl continues to showcase Kip’s impressive melodies and compelling storytelling. Musically, the band compliment Kip’s talents perfectly, the guitars sound both rocky and edgy, skilful percussion and amazing production all round.

I’ve been Around is a cheeky, fun song with a killer melody and fantastic lyrics:

“I flew to Rome, had coffee with the Pope, Talked about Johnny Cash”.

I’ve said this about Kip in the past but I get a real ‘BonJovi-esque’ vibe from some of his songs. Bon Jovi nailed the ability to write memorable songs with amazing melodies which stand the test of time and Kip has this down to a fine art too. He sings about ‘hanging out with Supermodels’ and you can hear a little chuckle after this line – I imagine that a whole variety of A-Listers and celebrities will be clamouring to hang out with Kip after listening to this album.

Bittersweet Company is a standout track as far as infectious songs are concerned.  This is one tune I cannot wait to hear live and the handclapping…don’t even get me started on this subject. Kip has firmly put handclapping back on the cool list.

The evocative lyrics of Sunburn and cleverly crafted song writing, is a real treat. I could smell the sea air and literally feel the heat on my skin in this gem of a track. The feel-good vibe of the album just continues track after track, guitar lick after guitar lick. First single More Girls Like You follows and The Bull – the second track Kip didn’t write but fits seamlessly onto the album as if he did. The line about him holding a Grammy in his hand? A travesty if he doesn’t – every ounce of his fibre and craft completely deserves one.

Blonde reveals a scathing view of the quest for instant celebrity and fame. Clever lyrics and plays on words show Kip at his best – this is a man who is real and who loves real women. He’s not impressed by fake – I can see scores of women running to the hairdresser to neutralise their colours before the next live gig and tossing their smartphones to the wind – after they’ve taken their sneaky close up of course!

“Ain’t even blonde girl, or true to your roots”.

As a hot-blooded male, Kip’s themes throughout this album centre on a celebration of females and dates – whether they have failed or not. He lets us all know that he is open to committing to a more meaningful relationship and not shy of stating he wants children at some point. Equally though, he is a modern man, having fun and not ashamed to admit it. Good Thing has  just that vibe echoing through it – you dig it, Kip asks?

Last Shot is a great mid-temp love song in which Kip likens his girl to a ‘last shot of whiskey – I’d press you to my lips, take a little sip, swirl you around & around & around, and shoot you down”. Try Again is a sexy, slow and familiar number in which Kip proves that he doesn’t give up easily – luckily for us. And then Guitar Man. Wow. A Dylanesque folksy style song, which is an remarkable finale to a very special album. I reckon I could probably get away with calling it quite anthemic – poignant lyrics, which show Kip’s free spirit, laying himself bare for his fans. The loneliness of life on the road and the satisfaction of knowing that he has moved his audience is what keeps that determined musician going:

“Yeah the fruits of my labours when the crowd sings along, nothing short of a saviour I go home alone. I’m an empty, faceless spotlight mic stand, get you high, get you low, I’m the Guitar Man”.

This album is the perfect offering to lovers of Kip Moore. I’m pretty excited to hear these songs live as his delivery, energy and dedication to his fans during his live shows has helped to carve out his huge UK fan base and anticipation for his upcoming shows is electric. Kip writes and records unpretentious, real country music with a rocky edge and gives his all for his artistry.

Charles Dickens once wrote in Oliver Twist that the law was an ass. Well in my humble opinion, if this album doesn’t gain a nomination for a Grammy, then the music industry is indeed an ASS!

Midland: On The Rocks