Kip Moore Talks Touring The UK & Giving Back To The Fans 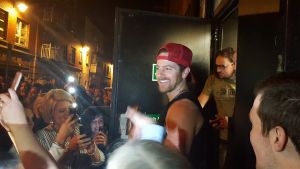 Following his hugely successful opening slot at the 3rd annual C2C Festival last year, fans in the UK were hugely excited to learn that Kip Moore would be coming back across the Atlantic to play a five-date tour this April. With Dublin, Glasgow, Manchester, Birmingham and London on the books, it was a chance to get to see the country rocker up, close and personal, and fans are already raving about the first couple of shows. Kip debuted with his first album ‘Up All Night’ in 2012 and followed it with the Springsteen-esque record ‘Wild Ones’ last August, and it’s clear his fan-centric approach is really working for him. Annette got a chance to catch up with Kip just before he headed out on tour in the UK.

How has your trip been so far?

It’s been amazing. I’ve been doing a lot of press, but I got a chance to get out last night and I went to go see a musical: Mrs Henderson, downtown in London. I’ve just had a great time so far.

When you came last time for your first trip, were you ready for the reaction you got? Because you got an amazing reaction from the British fans.

I had no idea what to expect. I didn’t understand the magnitude of the way I was received until we booked this tour, when I saw how fast the tickets were selling, so I’m just delighted to be here.

Some [artists] just come to London or just to Manchester, but you’ve got five dates, [so] you’re getting to see a bit of the UK. Have you got down time in each of the areas?

I think I’ve only got down time in one or two of the areas, so I’m going to try and get out every day at least and experience the culture, you know, if I can.

And you’ve just been out to Australia?

Yeah, Australia was one of the most fun times I’ve ever had travelling and playing music. The people were some of the nicest people I’ve ever encountered in my whole life, they were so kind. They loved the ‘Wild Ones’ record and it was just a blast to play it.

So if you think back to when you were early 20’s down in South Georgia, just playing in a few bars, playing some music, did you ever even dream that your music would literally take you all around the world?

Never. You know, growing up where I did, you just didn’t hear about people making it out and playing their original music. That was such a foreign thing and any time I would try to, it was like people just wanted to hear cover music. So when I was about 22, I made my mind up to do my own music and I stuck to that. I can remember playing my own music in bars and clubs around 23/24 years old, and my dad coming and kind of being like, “Man, you’ve got to get the crowd going with some cover music.” And I said, “Yeah, Pop I understand that, but nobody is ever going to know me for my own music if I play other people’s music.” So I mean, I stuck to it.

Can you still remember the first time when fans were actually singing your songs back to you?

Yeah. I started getting a following in Nashville around the time that I was probably 28/29, and that’s when labels started – it took a long time for labels to pay attention to me. I built a following and people started showing up singing my own songs, and it was kind of how the ball got rolling.

The music that you’ve got out at the moment, it’s a great album, are you as pleased with it as [the first one]? I mean the reaction to it has been fantastic.

Oh man, you know the ‘Up All Night’ record was such a commercially successful record. The second one has been like this underground, kind of cult following record. It’s yet to render the commercial success but it’s actually grown our fan base by double or triple in size, I mean it’s been a massive record for us. And you know the way I watch, the people used to just sing the ‘Up All Night’ record [whereas] people [now] shout the ‘Wild Ones’ record. That’s the difference.

Yes, there’s such passion behind it. Some of the songs, you put them on and you feel like you’re there at a live event, just because there’s so much feeling in a lot of the songs.

Yeah, yeah. I definitely feel like that’s what’s happened with this record.

So what are we going to see on this tour? Have we got a mix of old and new music from you?

Yeah. You [sic] got a mix of old and new, and then actually brand new. I’m going to break out a couple of songs I’ve never played before, ever.

Oh, how very exciting! Now, the one song that you’re going to get asked for over and over again is Dirt Road.

Well I’ll definitely play it, that’s for sure.

You play quite a lot of festivals; you’ve just been down in Florida playing Tortuga. How is a festival event compared to one of your own gigs? Is it a very different experience?

Yeah, I mean [at] one of our own shows the people, mostly the whole crowd will know the entire body of work, whereas at a festival people show up that might not know your music They are there for a lot of other people too, so you’re trying to turn on a lot of people to your music at festivals, whereas your own crowd you know that they are there to hear your music.

Absolutely. And do you get a different kind of reaction from British fans than you do, say to American?

One of the things that stood out at C2C, [was] at the end of the night you went outside and signed for everyone. From the fans’ point of view, the amount of respect you got from that one thing – and I know that’s something I’ve seen you do at other places. How important is it for you to connect with your fans?

I mean, it’s a crucial thing. I feel like we have a very loyal fan base because we try to connect so hard during the show, and then when I can I try to say thank you after. I mean, that night I signed for over three hours; that was a long night.

So are fans going to get a similar experience on this tour? Will people get the chance to come and get a picture with you maybe, or get something signed?

What I’m thinking about doing this time around – because the venues are saying they are not going to let me sign – I’m going to pre-sign all of my CD’s. And I’m going to try, every single night after the show, to have a meeting spot and play acoustics somewhere with no mic’s, no nothing, [and] let people gather around outside of the venue.

Wow, now as a fan that is one of those ‘money can’t buy’ moments. So what’s next for you? Are you working on the next record?

Any kind of rough timeline of when [it’s] coming out?

Hopefully sooner than later. That’s all I can tell you.

The other thing I wanted to ask you about was your kids’ skate parks that you do, because it’s really nice to see [you] obviously giving back to the community, but something that you actually genuinely seem really really passionate about as well. I wonder if you can tell us a bit about that?

Yeah, I’m actually building one right now in Cincinnati back in the States. It’s just one of those things where I’m just trying to do whatever I can while I have the platform to do it. I just have such a heart for the kids that struggle in those inner cities that don’t have much, and I’m trying to not only give them a safe place to go but a place where maybe it might inspire them to do something new. Skating is such a brotherhood community and I’m just trying to keep them out of trouble and get them something, a really nice – these are nice parks that we’re building. And just a place that they can feel good about going to.

As a mother I think something like that is so important.

Yeah. I’ve had a lot of the moms come up to me and tell me that these parks are keeping their 11 and 12 year olds out of gangs, so that’s worth it in itself.

Absolutely. It really seems like as much as you’ve had all this success, you don’t seem to have changed in your values. You’re very much about looking after people and staying true to yourself.

Absolutely. I think that’s the only way to be. I don’t buy into the hype around myself at all; I haven’t changed a bit and my head will always stay grounded.

Catch Kip Moore on tour through April 27 in Birmingham, Manchester, and London.