Down In A Hole – Album Review 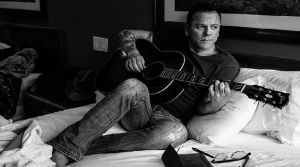 A compelling, truth-telling album – Kiefer has created something very honest and worth listening to.

I have been waiting really excitedly for this album, since I first heard Kiefer’s debut single Not Enough Whiskey, which I really enjoyed. I had high expectations and I was not disappointed.

Down In A Hole is a very enjoyable, compelling and entertaining album. It is not an album where you will find pop tracks, dance tracks, belters or beer drinking anthems. It is an album full of timeless, soulful, truth-telling stories, which Kiefer himself describes as his own personal diary. He offers us an album so diverse, that it delivers a real mix of cross-over genres such as Rock-Country, Country-Blues and Folk-Country. Kiefer sings his songs like he means every word and you find yourself captivated by his deep, expressive lyrics (he co-wrote every one of the 11 tracks on this album – with producer Jude Cole), his integrity and vocal emotion.

Kiefer has as very raspy, raw, mature rock-sounding voice, similar to that of Chris Rea mixed with a bit of Bob Dylan – bringing a really exciting sound to Country Music and music as a whole.

The detail of instrumentation in general on this album is excellent and makes the album really stand out. This is especially noticeable on songs such as I’m Going Home – where the backing gives the song a real nice beat and provides an exciting mid-tempo melody, with an outstanding guitar solo.

His second single off this album Can’t Stay Away, reminds me a little bit of Pearl Jam – perhaps it’s the guitar riffs or maybe even the song as a whole. This is a great track, very easy to listen to and absorb, with a nice use of slide guitar.

Truth In Your Eyes – features an enjoyable, catchy chorus with a simple mid to uptempo beat which suits the song perfectly. This is a very fun, toe-tapping tune.

I’ll Do Anything – has a wonderful melody with inspiring, optimistic lyrics and a happy up-beat tone. This is probably one of my favourite songs off the album. The chorus, in particular is very memorable and melodious.

Not Enough Whiskey – the debut single off the album and the song that introduced us to Kiefer, the Country singer. This song, with its melancholic melody and use of traditional Country instruments, has a Country/blues sound to it. It is a tragically beautiful song, filled with despair.

Calling Out Your Name – this would be Kiefer’s version of a ballad. The most emotional song on the album vocally, there is so much pain and regret in his voice, which you really feel during the chorus. This is quite an effective track, full of sorrow.

My Best Friend – a starting fresh, ‘learning to love yourself’ song. I find the lyrics of this song inspiring – it has a powerful chorus with strong, dominant backing vocals. ‘Goodbye to the past, it’s time to start again, I’ll find a way, yeah I’ll find a way, goodbye at last, I won’t look back again, no I’ll find a way, to make me my best friend.’

Shirley Jean – one of the more Country sounding songs with a bit of a traditional Irish – country twist to it. This song has a lovely melody with affectionate lyrics. ‘When they flip the switch, I hope all I can see is you in my arms, dancing with me. In this cold world, I did all I could do, never had love but the closest was you’.

All She Wrote – a Country-Blues song with a bit of grunge rock thrown into the mix. With aggrieved, passionate vocals, Kiefer proves the power and effect behind truth-telling lyrics.
‘Let me tell you a story from the marrow of my bones, let me tell you a story that will teach you how to roam’.

Down In A Hole – the title track off the album. An edgy country–rock song with disgruntled vocals and cutting lyrics that speak of self anger. ‘I’m talking to you, yeah you in the mirror. The stain on your shirt is from yesterday’s dinner. Couldn’t keep it down, sure look like a winner. Get on your knees and pray like a sinner, you’re down, down in a hole’

Gonna Die – This is the song where I really hear the Chris Rea element to Kiefer’s voice. In fact this song has a real Road To Hell style that I really love. It is a great song with a real haunting folk vibe.

A well produced, well rounded album, Kiefer has created something very honest and worth listening to. Nothing on Down In A Hole is predictable or samey but is simply full of great songs, which really deserve attention and critical acclaim.

I recommend this to any music lover, especially to those who love a wide variety of genres, or who love artists such as Dylan, Travelling Wilburys, Clapton, Chris Rea, Pearl Jam – and of course, Country.