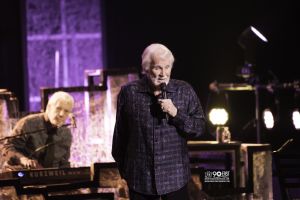 On September 27, 2016, Kenny Rogers announced that after fifty-seven years in music, his 2017 tour would be his last. Before parking the tour bus for good, Kenny reported to Rolling Stone, “this final tour is going to be a celebration of all of my music, and I know each night will be truly special.” On April 6th, Kenny brought his songs and stories to the Knoxville Civic Auditorium for a night that was without a doubt a celebration.

Onstage, the night played out like a timeline. Seated on a stool front and center, Rogers prepared the audience for the evening to come in what he described as ” a linear look at my personal life.” With a shift to the upstage screen, a series of old photos and movies played out like a family photo album, with Rogers as the narrator. 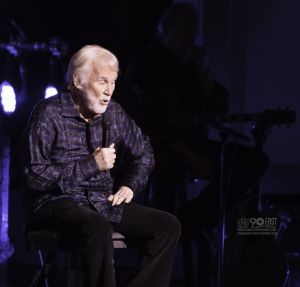 Taking us first to the teenage rock’n’roll era of the 1950’s, Rogers flashed a picture to the screen of a group of young men in matching suits and graduation caps. Kenny Rogers remembered his early days in music with Texas band, the Scholars, in 1956 in which he was merely Kenneth Donald Rogers, guitar sideman. While the band’s name was “The Scholars,” he laughed at their less-than-scholarly ways.

With a performance of the jazz standard “Walking My Baby Back Home,” Rogers introduced the audience to a group he was once part of, The Bobby Doyle Three. With a heartfelt introduction, the gambler welcomed his tour partner, Linda Davis, to the stage to sing another staple of the time, “It’s Only A Paper Moon.” Linda flawlessly brought her signature sweetness to the standard. 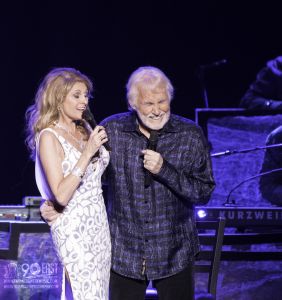 Kenny took to the microphone to give the crowd a little insight into his song process. “Throughout my career, when I was looking for songs, I always wanted to find songs that said what every man wanted to say, and what every woman wanted to hear.” With no further introduction, Rogers began a medley of his most beloved ballads— “Through The Years,”  “You Decorated My Life” and “She Believes In Me.” The crowd sang each lyric with Rogers, almost as if each one of them were recalling personal memories attached to each song.

Following the walk down memory lane, Kenny backed himself up saying “Well, we jumped thirty years ahead, let’s go back.” 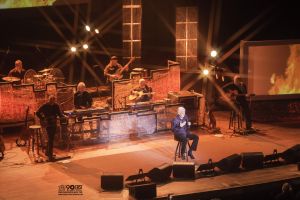 Rogers turned back time to the defining era of the 60’s and his time with the pop-psychedelic group, The First Edition. “I walked this song to thirty-four radio stations in the US, and every single one of them turned it down for being “too sexual”.. I took it to England and when I got back, each of those stations who turned it down was playing it.” Backed by a heartbeat pulse from the band Kenny kicked off The First Edition’s “Something’s Burning.”

The iconic crooner paused for a moment to recite the mind-bending lyrics of his next song, The First Edition’s “Just Dropped In (To See What Condition My Condition Was In). While laughing at the song’s lyrical bizarreness, his band effortlessly changed decades from 50’s teeny-bopper to full blown 60’s psychedelic.

Rogers welcomed Linda Davis back to the stage to sing another hit for the group (and later for Dolly Parton) “But You Know I Love You” (and I must add, aside from her beautiful voice, she had the most stunning costume changes for each number. Go Linda!) 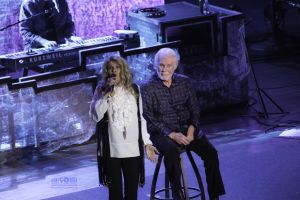 Rogers introduced “Tell It All Brother” with “In the 60’s, the music became socially conscious, and The First Edition was lucky enough to sing this song on the steps of Kent State University”. Effortlessly, a flower-child sing-a-long erupted.

Rogers lead the crowd to another paramount moment as the screen behind him illuminated with clips of a young Rogers and Michael Jackson from the acclaimed music video, ” We Are The World.” “Sometimes a song comes along that is bigger than the people who wrote it and the people singing it.” With those words, he introduced the song he co-wrote with King of Pop, Michael Jackson. Inviting the crowd to once again sing with him, he performed ” We Are The World.

Rogers played “Love Lifted Me,” a song he said his fans personally requested. “When I was putting together my farewell tour, I asked the fan club what would they wanted to hear out of my 75 albums, and I was amazed by how many people came back with this song,” 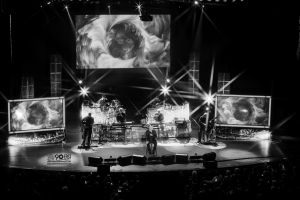 Calling it “the song that changed his life,” Rogers sang “Lucille” to a choir of every seat in the auditorium.

In tribute to his beloved duet partner, Dottie West, Rogers performed “Every Time Two Fools Collide” with Dottie’s voice played through the soundboard. He couldn’t help but look back at her pictures on screen and smile while hearing her voice.

As Rogers stood up from his stool, he joked “this front row looks so worried I am standing. Don’t worry, if I were to fall, I don’t need you to help me, I have life alert”.

Davis returned to the stage for another Dottie West tribute. Singing “Anyone Who Isn’t Me Tonight,” Rogers and Davis played off of each other’s performance like old friends. The friendly exchange lead into Linda’s rendition of Dottie’s girl power anthem “Lesson in Leavin.”

Rogers spoke of his road to success saying “success is a funny thing, the more you have, the more you get, and I was so hot at one time,” to which an adoring fan replied, “you’re still hot Kenny.” Performances of “Coward of the County” and “Love Will Turn You Around” celebrated his “hot successes” on the big screen.

As the night continued, it was no secret that Rogers was no stranger to duets. “I have been blessed in my life to sing with some of the most beautiful women in country music, Dottie West, Sheena Easton, Dolly Parton.. even Ronnie Milsap. But this was perhaps my favorite” Davis and Rogers sang “We’ve Got Tonight.”

From that moment on, Rogers took the audience’s excitement to a full blaze as Kenny sang his career-defining hits,”The Gambler” and “Lady” back-to-back.

The blaze continued to burn as Kenny Rogers performed his ceremonial tambourine toss to a wild crowd all while singing his standard “Islands In The Stream.”

As the crowd settled, Kenny took a moment of genuine gratitude towards the audience; 60 years worth. He also stopped to thank his wife and beloved sons. “I have Identical twin boys who are twelve. They said Dad, what are you gonna do when you quit singing … I said I’ll spend all my time with you guys …and they just shook their heads.”

“One of the things I will tell you I will miss the most is the friends I’ve made doing this.” As photos and videos of the two rolled behind, he began his Dolly Parton duet; “You Can’t Make Old Friends” with Dolly’s unmistakable harmonies coming from the sound board.

With a final scan of the crowd, Rogers said: “after all of this time, I refuse to go out on a slow song.” Davis joined him onstage in his finale of “Blaze of Glory.”

As he sang the final lyrics “Let’s go out in a blaze of glory, All good things must end, Like two heroes in a story, Let’s go out like we came in, In a blaze of glory”, it was clear that the gambler had dealt an incredible final hand to his adoring fans in Knoxville; one that spanned 60 years of music and memories.

SING ME BACK HOME: THE MUSIC OF MERLE HAGGARD