Live in No Shoes Nation with Trip Around the Sun 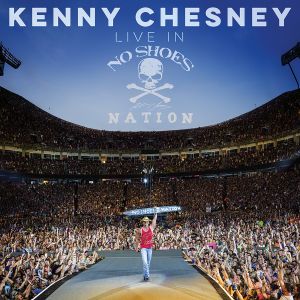 Having spent the better part of the year culling, mixing and mastering Live in No Shoes Nation, Kenny Chesney created what he believes to be the ultimate love letter to the people who’ve come out year after year, summer after summer. Believing that his songs, especially the hits, only truly find their ultimate form after being shared with the world, Live in No Shoes Nation serves to capture the passion, the intensity and the spirit of No Shoes Nation at large.

“The more I listened, the more I realized: they have no idea how good they sound – or how much they give these songs new shapes,” Chesney says. “The last thing I thought I’d be doing for my next record was a live album, but the way No Shoes Nation sounds, it seemed like – once I really started digging in – the only thing to do.”

Further heightening that connection between the live experience and the people who make the noise, Chesney wanted to find a way to close the circle. Anyone buying a ticket to this year’s Trip Around the Sun 2018 stadium shows can receive a physical copy of Live in No Shoes Nation as part of each ticket purchased.

“It just seems like the right thing to do,” Chesney offers. “For all the people who’ve been part of making these tours so successful every single summer, let’s make it as easy as possible to put the music in their hands. We’re all moving so fast, with too many places we have to be. This way, if you want to hear something like ‘One Step Up’ from the Stone Pony, or something that goes all the way back to 2007 with Dave Matthews and I having an end-of-tour moment singing ‘Space Cowboy’ and ‘Three Little Birds,’ or the night in Boston when we sang ‘Happy on the Hey Now’ for a friend from the islands, it’s all here!”

“And as much as downloading is so convenient, there is nothing like putting a CD in your car – and just driving and sinking into the music. Maybe I’m the only person who still does that, but I can’t tell you how many nights I’ve spent during the making of this record doing just that. It does sound different, so I figured: make it part of how we get into Trip Around the Sun.”

From the beach at Perdido Key, on the Florida/Alabama line to Green Bay, Wisconsin’s Lambeau Field…from Tampa, Kansas City, or Denver’s Red Rocks Amphitheatre to Foxboro, Massachusetts, Live in No Shoes Nation measures the fun, the friends, the soul and the songs that have come to define coming-of-age in the flyover this century as they’ve been lived, sung and cheered to since the only Country Artist on Billboard’s Top 10 Touring Acts of the Last 25 Years found himself a true stadium headliner.

“This is about music, about getting pumped up for next summer’s stadium shows,” Chesney says of the CD that fans can receive with every ticket. “Music is meant to be lived and loved and turned up. I wanna think we got that right here, and that everyone coming to the shows thinks they sound as good on these tracks as I do.”

May 5 US Bank Stadium Minneapolis, MN