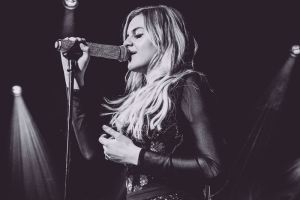 Black River Entertainment’s Kelsea Ballerini made her wildly successful UK debut last week when she performed a SOLD OUT headlining concert at London’s hip UNDER THE BRIDGE nightclub, charmed viewers during several TV appearances and even popped in to chat with Steve Wright at BBC Radio 2, further showing strong international appeal that will propel the star toward new horizons this year.

Kicking the week off with a packed showcase in front of the UK’s finest in media, streaming, television and radio (May 9), Ballerini was then greeted by roaring fans at UNDER THE BRIDGE (May 11) who sang along to every word of historic #1 hits like the deeply moving ballad “Peter Pan,” uptempo jams “Love Me Like You Mean It” and “Dibs,” and her fun-and-flirty Top 5 single “Yeah Boy.” Ballerini’s concert experience was described by local media as “electric” and a hint of big things to come.

“Kelsea rocked Under the Bridge last night and now she’s tested the waters here in the UK … With a warm stage presence, an engaging personality and a set list full of great songs, Kelsea showed the UK why she’s one of the biggest new artists in Country music.” – Entertainment Focus

Ballerini won’t stay away from her new fans for long. On May 26, she’ll kick off Lady Antebellum’s YOU LOOK GOOD WORLD TOUR in Bakersfield, California, which this fall will play to massive international audiences including the following dates:

Meanwhile, Ballerini heads into the 2017 CMT Music Awards with an incredible four nominations (tying her for the lead with fellow superstars Keith Urban and Thomas Rhett): Video of the Year (“Peter Pan”), Female Video of the Year (“Peter Pan”), CMT Performance of the Year (Meghan Trainor, Jill Scott and Kelsea Ballerini, “You’re Still the One/Any Man of Mine/Man, I Feel Like a Woman” From CMT Artists of the Year), and CMT Social Superstar. This year’s show airs live from Nashville June 7 at 8 p.m. ET and voting is now open on CMT.com.
She’ll follow up on June 9 with a high-profile co-host appearance at Nashville’s Nissan Stadium for the 2017 CMA Music Festival and is currently working on her much anticipated sophomore album, with more details coming soon.
For more information visit KelseaBallerini.com, and reach out to her on Facebook, Twitter, and Instagram.

GRAMMY nominee Kelsea Ballerini has launched to stardom after releasing three consecutive No. 1 smashes from

her critically acclaimed debut album THE FIRST TIME, the PLATINUM-certified “Love Me Like You Mean It” and “Peter Pan,” and GOLD-certified “Dibs,” making her the only female artist in country music history, including female duos and groups, to achieve this accolade. The talented singer-songwriter wrote or co-wrote all 12 songs on her debut. Following Top 5 hit “Yeah Boy,” Ballerini is currently in the studio working on her second album — as Entertainment Weekly named her among “The 35 Most Anticipated Albums of 2017.” The Black River Entertainment artist appeared on the cover of Billboard Magazine’s GRAMMY preview issue, was included in Forbes’ “30 Under 30” class of 2017 and featured in People Magazine’s “Beauty at Every Age” list in their iconic World’s Most Beautiful issue for 2017. She’s been named “The Country Sweetheart” in People’s elite “Ones to Watch” portfolio, praised by Rolling Stone as the “Nashville It Girl,” touted by Billboard as “Country’s Next Queen,” and selected as one of CMT’s Next Women of Country. After her 2016 headline THE FIRST TIME TOUR — which visited dozens of cities across the U.S. and included sold-out shows in her hometown of Knoxville, Tennessee; Minneapolis, Minnesota; New York City; Los Angeles; and more — she joined Thomas Rhett for his HOME TEAM TOUR and will next embark on Lady Antebellum’s YOU LOOK GOOD WORLD TOUR. Awarded Billboard’s “Rising Star” honor at the prestigious 2015 Women in Music event, Ballerini has continued to gain recognition by scoring her first-ever ACM Award win for New Female Vocalist of the Year, Best New Country Artist at the iHeartRadio Music Awards, multiple Radio Disney Music Awards and the American Country Countdown Award (ACCA) for Breakthrough Female of the Year.