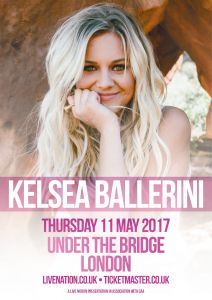 You know it’s going to be a special night when it’s an established US country artists’ first UK show. Tennessee’s own Kelsea Ballerini packed out London’s Under The Bridge on Thursday evening to play a sold out show to the 550 capacity audience.

Every song included on her set list was performed with passion, high energy and a charm that showcased how surreal the show was for her. Opening with ‘Yeah Boy’ and working her way through ‘Looking At Stars’, ‘Square Pegs’ and ‘Dibs’, all from her debut album The First Time, her vocals were stunning. Having seen her perform a few times already in the US, this is the strongest I’ve heard her sound. The screen behind her displayed an array of colours and her name, making the venue seem bigger and giving the stage a real presence. 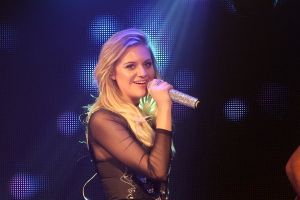 A big part of Kelsea’s performance is her interaction with the crowd. She feeds off the crowd’s energy and I think that’s why this night was so special. She opened by saying she genuinely didn’t think anyone would actually turn up and how incredible it was to sell out within an hour. For a lot of the audience, it was the first time they had seen Kelsea perform live and it made the atmosphere electric. Kelsea displayed her shock and happiness that everyone knew all the lyrics. “This song isn’t even out yet, how do you know it?!” she exclaimed in the middle of ‘Roses’ before going into ‘High School’, both of which are new songs expected to be on her upcoming second album.

Her debut album, The First Time, only recently had its official UK release, but I’m sure that the majority of the audience have already owned a copy since its initial release in May 2015. She thanked fans for listening to stories and songs and lyrics, which is always something that UK audiences are well known for. She expressed her love of songwriting and that it would always be her first priority. 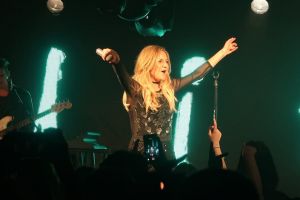 Between her own songs, she included a few covers including Little Big Town’s Girl Crush, which had the audience harmonising from the first note. She finished the set with crowd favourite Peter Pan and XO, the latter of which is her first official UK single release. The audience never stopped singing.

Obviously thriving from the crowd reaction, the encore started with Kelsea in the middle of a captivated crowd, performing an incredible version of First Time. She continuously thanked fans for coming out to see her. My favourite thing about watching Kelsea’s career progress is that we’ve seen her be a fan first to going on to achieve her dreams. I think that’s why she connects with the audience so well.

You see a lot of comparisons to an early Taylor Swift, and while these are clearly a compliment, Kelsea certainly proved her status as an artist in her own right. Fresh from sharing a stage with Shania at Stagecoach Festival, i think this is only the beginning for her. She has a charisma that i haven’t seen in a lot of female singers lately and she’s approachable and relatable to a wide audience. I loved that the merchandise was tailored to mark the occasion, with the date and venue on t-shirts and posters. The UK certainly made an impression and we’ll see her back supporting Lady Antebellum in October, but hopefully for her own tour too.
Setlist: