PLATINUM-selling duo Maddie & Tae announced details today for their headlining TOURIST IN THIS TOWN TOUR, kicking off on April 15 in Baltimore, MD. “With the stage confidence of a seasoned duo” (Milwaukee Journal Sentinel), Maddie & Tae will showcase their “powerful” (Cleveland Plain Dealer) and “particularly soulful” (Cleveland Scene) live show, which earned high-praise throughout their 55-city trek on Carrie Underwood’s 2019 The Cry Pretty Tour 360.  Sponsored by Simonton Windows and Doors, the TOURIST IN THIS TOWN TOUR will feature support from Avenue Beat and tickets go on-sale this Friday, Jan. 17 at 10am local time at www.maddieandtae.com. Following their headlining run, Maddie & Tae will hit the road this summer with Lady Antebellum for their 2020 OCEAN TOUR.” 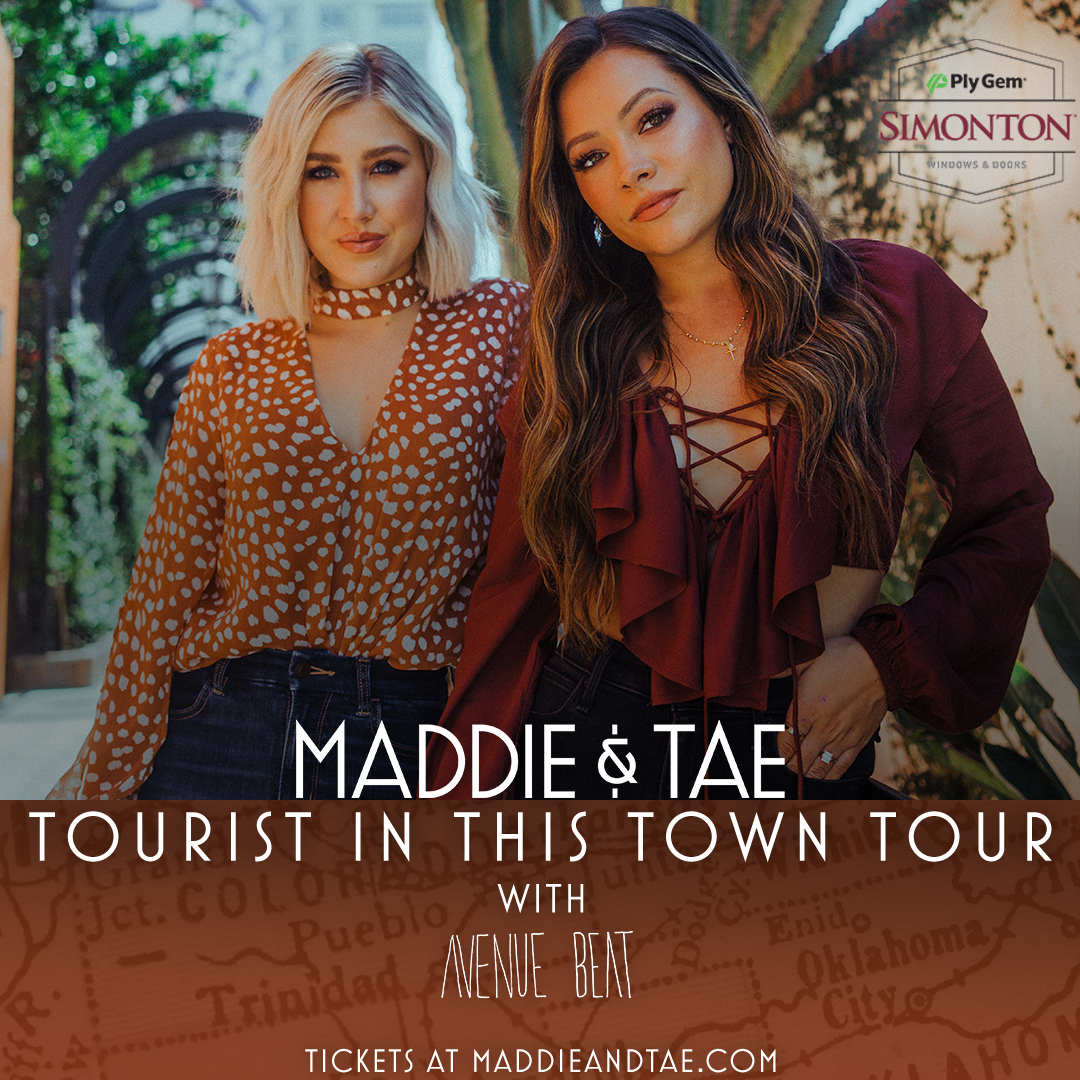 Feels so surreal to be going out on a headlining tour, especially with our new record,” said Dye.  “These songs are our raw unfiltered stories, and we can’t wait to tell them live.”

“We’ve waited five years to go back out on a headlining tour. We are so excited to see our beautiful fans singing all of this new music,” added Marlow.

Award-winning duo Maddie & Tae are drawing praise for their new music “anchored around their stellar vocal pairings and some of the tightest harmonies on Music Row” (Rolling Stone) with a “sound that’s identifiable while still representing a distinct step forward” (Billboard). Maddie & Tae first broke out in 2013 with their brilliant “Girl In A Country Song,” which took Country radio by storm, skyrocketing to the top of the charts and quickly going PLATINUM. The duo became only the third female duo in 70 years to top the Country Airplay charts, also earning trophies from the Country Music Academy and Radio Disney Music Awards along with multiple ACM, CMA and CMT Award nominations. Receiving widespread praise from NPR, Billboard, Entertainment Weekly, The Washington Post, Glamour and others, Country music’s hottest stars including Carrie Underwood, Dierks Bentley, Lee Brice and Brad Paisley have welcomed Maddie & Tae on the road, with the pair set to support Lady Antebellum’s 2020 OCEAN TOUR following their headlining TOURIST IN THIS TOWN TOUR. For additional information, visit www.maddieandtae.com.

Brash. Bright. Fresh. Wildly melodic. Avenue Beat are three girls from Quincy, Illinois, who grew up ingesting social media platforms and theater groups – and turned into the notes of a chord that lands somewhere between Taylor Swift ascending and Billie Eilish at her most real. The genzennial collective of Sami Bearden, Savana Santos and Sam Backoff are strong, smart, fun – in love with life, each other and getting on with it …fresh face of new feminism, while blowing off being told who girls are supposed to be. Avenue Beat’s debut self-titled EP is available now via The Valory Music Co./Tape Room Records and was co-produced by lead singer Savana, David Garcia and Ashley Gorley. With the stretched staccato vowels of the hilarious self-empowering “Delight,” sisters-sticking-together euphoria of “Be A Bro,” angst-rejecting post-breakup “Ruin That For Me” or their self-induced euphoria of “Broke,” Avenue Beat beckons listeners with pillows of narcotic harmony, glistening melody and lyrical truths. Named an Named an “Artist to Watch” by Sounds Like Nashville, Taste of Country, NYCountry Swag and more – the trio was selected as a MusicRow 2020 “Next Big Thing,” Music Choice “Country Rising 20” and joined CMT’s Next Women of Country Class of 2020. For the latest information and more, visit AvenueBeat.com and follow along on Instagram.