After the fantastic night at the CMA Songwriters Series we got to sit down with Jimmie Allen the morning after to talk a little about the night, his trip here, his impact in country music and why he should be on the main stage for C2C next year! 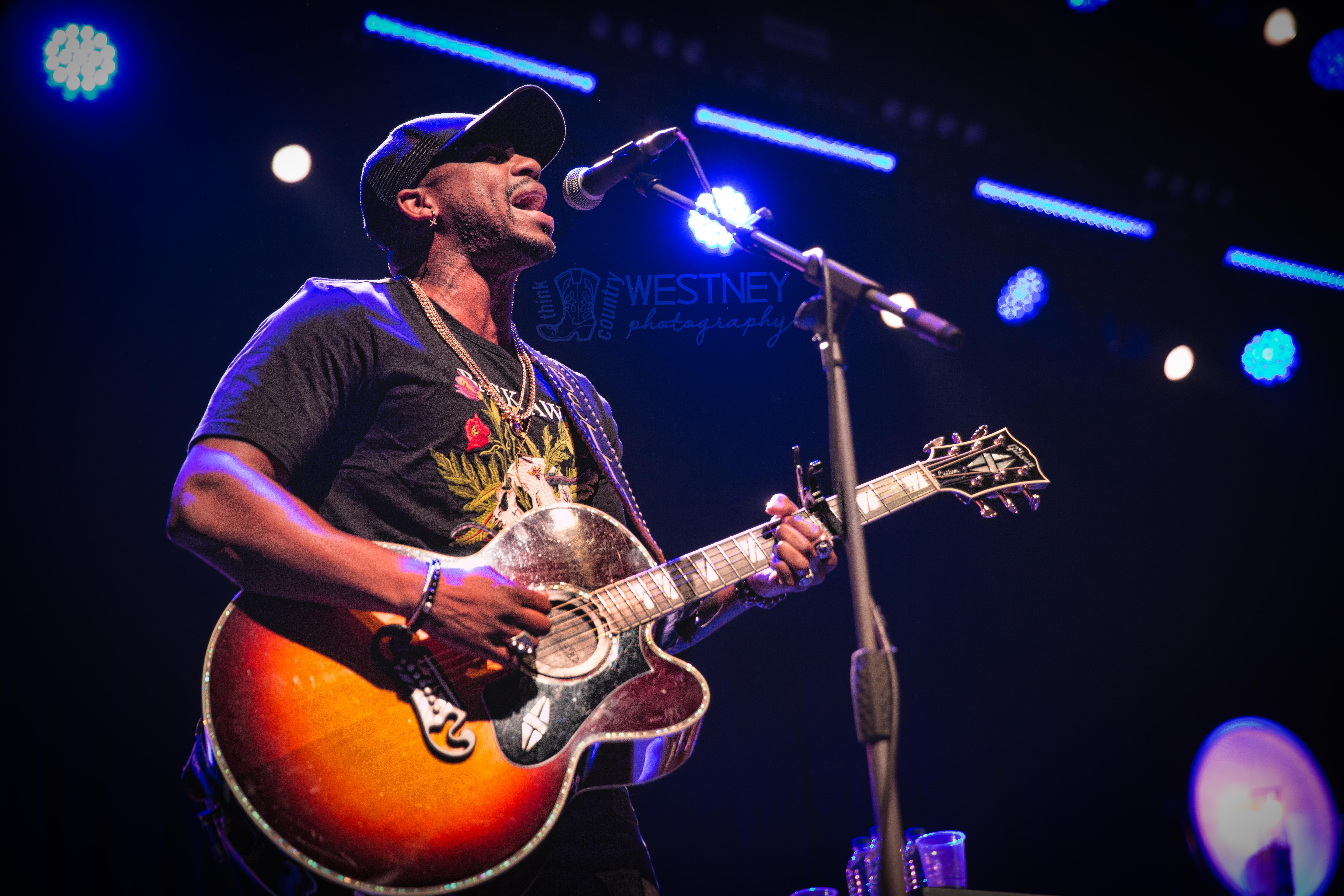 Amy: Jimmie! So great to sit down and talk with you, how’s it going after last night?

Jimmie Allen: Oh, it’s going great! Still catching up on sleep. We had like a crazy two weeks before we came over here and just got straight to work but it’s been great. You know, it’s been awesome to be back over here, hang out, see some people.

Amy: You were over before, of course!

Jimmie Allen: Yeh I was here back in October.

Amy: So last night was amazing, between all five of you.

Jimmie Allen: I forgot I sang last night for a second!

Amy: How is that for you? In terms of being able to sit there and have such an attentive audience? I know everyone just hangs on everyone’s word on that stage for songwriters.

Jimmie Allen: It was cool, you know, because a lot of times as songwriters you want to talk about the meaning of the song and kind of where it came from but you’re not always given that opportunity. So every opportunity we’re given to explain the song and have people listen this is amazing. Also to be over here doing it, you know, the crowd’s already pay a lot more attention to the show. So to do it as like a writers round thing, when they’re really listening was like awesome. There were moments when you could literally hear a pin drop or a baby breathe. My dad say’s baby breathe. I don’t know why, it’s weird.

Jamie: I think you really kind of knew what to do with the UK crowd which is great. So many people come over and say ‘I heard everyone listens really well’, but kind of like when you came out into the crowd you obviously, you’ve worked out that if you’ve got something that people want to get involved with and get along to that they will equally give it as much energy and it’s really great to see it. We’ve been coming to the songwriters show every year and everyone says it’s the highlight of the whole year. Last night was just something a little bit different and it was amazing.

Jimmie Allen: Yeah, it was fun, you know, we try to have a good time because, I know Travis, I don’t know Ross. So Ross is a songwriter so he’s in Nashville a lot more and then Cam is travelling and Laura is travelling and Laura’s in Nashville but me Travis never see each other anymore. So it’s like, you get a chance to be on a stage together we get to jump and clown around for a while.

Amy: It just it was actually it’s just really nice to see you all just having fun. Especially you at the end with Cam playing ‘Burning House’, you were like a little kid on the side of the stage, i loved it!

Jimmie Allen: I am such a fan of her.  She’s amazing.

Amy: I love that you and still enjoy that so much from other songwriters.

Amy: So how are you feeling about the arena shows?

Jimmie Allen: I’m feeling good. I don’t even know what the arena looks like.

Jimmie Allen: Yeah I am looking forward to it, just seeing more people singing songs over here. So we didn’t bring a full band we’re doing it acoustic this year. So curious to see how that’s going to go over.

Amy: They’ll love it. People will love it. I guarantee you. So this is a question I was wondering whether or not to ask and then after last night it seems nothing is off limit. So a few years I went to the Jack Daniel’s barbecue cook off down in Lynchburg. When I was walking back there was a guy singing on the stage, a black Country singer and I thought to myself, you don’t often see that. It actually turned out it was Charley Pride’s son! But obviously in country music it’s a very white dominate genre, Of course, you’ve got people like Charley Pride, Darius Rucker, Cowboy Troy. Do you feel like you’re kind of leading the way somewhat for other black country artists to breakthrough?

Jimmie Allen: I feel like there’s a lot of black country singers out there that people don’t know about because they’re not like mainstream. You got guys like Darius and Charlie and then Kane Brown. You’ve got Kane. He’s literally selling out around arenas, ten thousand plus people, it’s nuts. I just toured with him it was crazy. Him, Mickey Guyton and a new girl name Tierra I wouldn’t really say I’m leading the way I would just say I’ve joined the pack of people who are you know bringing attention to, ‘hey, you know there’s black people who did this too’, because you know somebody asked me, they said, ‘So are you trying to get black guys in the country music?’. I said, ‘Well I’m actually trying to get country music back to its roots because it came from Blues which came from black people’. So if we are being honest…

Amy: That is something that has always confused me. When you go back and you look at the history it almost doesn’t make sense yet that it’s not more of a diverse genre.

Jimmie Allen: I’ve always looked country music like black America. It’s young, it’s new. It was started by people out here and a few people kind of did it and then it’s become its own like whoa you know things like wait a second. Let’s get back to the roots where it really came. You know but I think it happened like that cause back then you know there was no social media there was no Internet. So if the only person you see on TV singing country music, like the 40s and 50s and whenever TV came out, was a white guy you know if you’re a black guy in Detroit you don’t know that there’s a black guy maybe like in Montana or Colorado or Arkansas somewhere else sing country music because only time you see country music is when a white guy is singing it. So therefore, when Motown started in like the 60s, it was all black people doing that you know and they had the Jackson 5 the Temptations and Diana Ross all of them. So if you’re black in Detroit you listen Motown. That’s where the two things kind of started to where country music was Western and was dominated by white America and in Detroit and Motown and black was Motown. So it’s kind of how back then you stuck with what you know because that’s all you saw. Then with the development of the Internet and more advanced television channels and social media now it’s easy. I can lay in my bed see what’s going on in China. It’s really helped kind of expand the mindset and really give confidence to people who want to do something that might not always see someone else that looks like them doing it. To where you can hop on your phone and see ‘oh yeah, he’s doing it’!. I’m not a weirdo! Maybe we’re all weirdos. You know we’re all weirdos together but it’s cool to have access to see people like you or something you want to do.

Amy: I know that previously when you have sat down with Think Country it has been I think Annette and Patti at CRS, so we are here taking the reigns today!

Jamie: So you came over in October, like you said, and from what you’ve seen even just from last night and walking into the O2 yesterday, because we saw someone said that when you walked through and you saw your picture up on the big banner, straight away you were like ‘woah that’s me’! What have you heard about this festival that’s kind of why people are so interested and wanted to be a part of that more and more.

Jimmie Allen: If you’re an artist and you find out there are people that love your music and they love it passionately. You want to go there. The more passion you see people putting into something you’ve created you really want to show your appreciation and give back and not just send music over but you want to come over yourself and I’ve heard it was great. I wanted to do it last year but I wasn’t be able to. So this year I got the opportunity I said let’s do it. So my plan actually is I want us to find a way to start come over here like every eight or nine months doing something and really create a culture base here.

Jamie: Outside of the music have you found anything over here that you really like, that you like big on?

Oh, fashion for sure. Every time I’m over here I shop uncontrollably! I’m obsessed with different artists. I’m trying to really dig in with other artists over here. No matter the genre, just kind of just create a music culture to where it’s kind of like a collective. You know you have people who support each other and write together, do shows together and you’re not really worried about, that’s hip hop, or that’s country, or if that’s pop. I want to create a human Spotify playlist as a show because I’m like people will go from Keith Urban to Jay Z to Elton John to U2 to One Republic to Kanye West on a Spotify playlist. So why can’t you create a show like? Or put on a concert like that? You know find, three up and coming artists from over here that are in different genres and we all just put on a show together. It’s something that we you know figure out a tour, we’ll play here and here and here. All we’re doing is they’re playing to the people who already love their music and I get a chance to dip into that. You’re creating like a cross party culture, I think would be cool.

Amy: Yeah, I think that’s a really good idea. Definitely. I think people get too kind of caught up in genre now. For me, there’s always the whole debate with Florida Georgia Line for example. I don’t dislike any of their music. I don’t always like the fact that things try to get pigeonholed into certain genres and I think that if people just try to break those barriers and actually just listen stuff for what it is then it would be great. Alright so finally, main stage next year for C2C?

Amy: Thank you so much for chatting with us, we loved last night.

Jamie: Really looking forward to the arena show too, cheers Jimmie, have a good weekend!