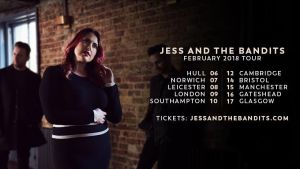 So Jess and the Bandits UK tour started on a snowy Tuesday night in Hull.

The evening kicked off with a quality support slot from Kevin McGuire. We had a good 8 songs from Kevin that obviously included 3am and Late mixed in with a brand new song and a Maren Morris cover which was a definite crowd pleaser. Kevin has a coolness about him which combined with an emotional vulnerability when he sings makes him instantly likeable. He definitely set the tone right for the night.

Then it was time for the Jess and The Bandits to take the stage. This tour should have originally been in September and you couldn’t help but feel like this night was long overdue. Like a corked bottle ready to explode we had a huge sound from the band for the intro to Trouble, their way of letting us know this was definitely not going to be a gig you could have a snooze through!

The Bandits themselves have seen some changes but the consistency is that they are always four extremely talented musicians. Jess’ enthusiasm is also high and infectious. The crowd, initially holding back, were drawn in closer by Jess and really made it feel like a party.

The big sound continued through Stop me and I’m not going home. We then went into a more chilled out feel with Kiss me quiet and World still round; picking up again with Nitty Gritty which was clearly an audience favourite with the crowd starting to sing along. Kings of Summer felt a little out of place on such a cold miserable night but definitely helped lift the spirits. Like she does best Jess continued belting out songs like The Bullet and Ready Set. The set included a really good mix of the favourites from the Jess and the Bandits albums plus a couple of covers, including a fab version of Bonnie Raitts Love sneaking up on you. So whichever is your favourite I am sure it will be in there. The night was then finished off a sultry version of Fault lines and the band bowed out to Single Tonight.

Yes there were some sound issues which may have affected some people’s enjoyment of the music but did it dampen the bands enthusiasm? Absolutely not.

I took a non-country friend along to ensure I had an impartial opinion and when I asked her what her highlight was she said Kevin McGuire with no hesitation. Some of the best upcoming UK country acts are represented in the support slots across this tour so my advice is don’t be late, get there in time to catch the support to really set yourself up for a good night of music.