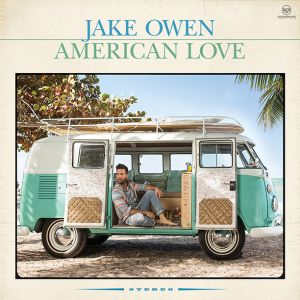 In the liner notes of his new album, Jake Owen writes, “I promise you if you read this far into my liner notes it’s because you care about me and I love you dearly.”  That’s a nice sentiment, although I doubt that love was meant for me, whether I read the liner notes or not.  Truth be told, I always read liner notes, a habit I developed from the very first album I owned as a child.  It gives me insight into the creation of the entire album.  I must be honest, I was anticipating Owen’s newest release with an odd mix of excitement and caution.  In my estimation, there was a possibility it would resemble that of his last single, “Real Life”, a somewhat quirky observation of the world, littered with country music rap.  It doesn’t.

“American Love” makes me want to shout to the masses that the real Jake Owen is back!  The one that sings songs you can’t help but sing along to.  The one that conjures up images of beach parties or weekend campfires.  Like an old friend you haven’t seen in ages, I just want to run up and embrace him and thank him for coming back into my life.  Not that “Real Life” wasn’t fun, it just wasn’t the Jake Owen we’ve come to know and love.  It was a diversion.  An experiment, perhaps.  “American Love” is no experiment.  It’s the real thing.

This record is jam packed with songs written by Nashville’s elite.  Names like Jaren Johnston, Shane McAnally, Ashley Gorley, Josh Osborne, Nathan Chapman, Hillary Lindsey, Luke Laird, Ross Copperman, and the list goes on.  Only one track credits Owen as a cowriter.  Harkening back to the “Days of Gold” album, where none of the songs were written by Owen, it’s good to see egos can be set aside to produce the best possible product.

The first single off the record, “American Country Love Song” has been in heavy radio rotation for some time now, and its sweet message of young love set to music never grows old.  It’s upbeat, fun and it’s pure Jake Owen.

“If He Ain’t Gonna Love You” probably couldn’t miss, thanks to help from heavy hitter of the moment, Chris Stapleton.  Collaborations are becoming so common these days, and I have my own theory why they’re so successful.  Our own voyeuristic tendencies come out when artists collaborate.  We NEED to know what happened when artists work together.  We may not always care for the end result, but at the very least, we have to hear it at least once.  This track fully deserves the airplay it’s starting to receive.  It’s one where the curiosity of having to hear it, pays off handsomely.

If I had my way, the next single would be track number 4, “Everybody Dies Young”, a lesson in living life to the fullest.  The topic itself is often loaded with cliches, but this song was written creatively and the message is clear – get out there and live, because there are no do overs.

In true Jake Owen fashion, this album was promoted in style – a road trip in a classic Volkswagen van, with stops along the way to meet fans.  In fact, the album cover art shows a barefoot Owen sitting in the back of that van.  The fifth cut on the record is called “VW Van”.  It’s pure fun, with portions of the song recorded on the van in cities across America.  “Who gives a damn/bring the whole fam” is a great lyric when we’re talking about Jake Owen.  He is the undisputed MASTER of fan interaction, and I’m sure if Volkswagen had made a bus large enough to house all of his legions of fans, he would have found a way to cram them all in.

The album is rounded out by “American Love” (not to be confused with “American Country Love Song”), “After Midnight”, “Good Company”, “LAX”, “When You Love Someone” and “You Ain’t Going Nowhere”, all of which deserve a positive nod.  There’s no denying that this project was a carefully planned “rebirth” of an artist that experienced some difficulties in his personal life and possibly lost his way professionally for a split second.  The result is exactly what we’ve been waiting for.  The old Jake is back in the house and I’m running to grab him a cold one.