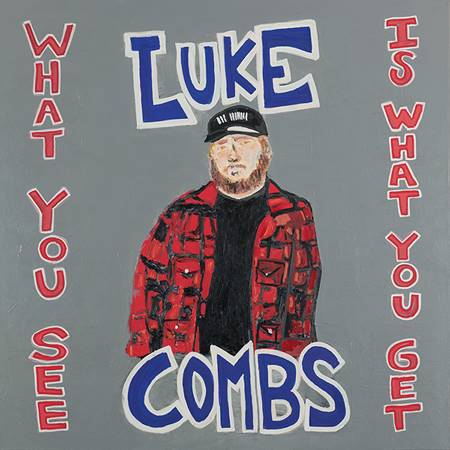 Luke Combs’ What You See Is What You Get debuts this week at No. 1 on the all-genre Billboard 200 chart in the US as well as Billboard’s Top Country Albums chart with 172,000 equivalent units sold. It is also a global No.1 album, topping all genre charts in Canada and Australia. Out now via River House Artists/ Columbia Nashville (stream/purchase here), the record enjoyed the largest streaming week ever for a country album with 74 million on-demand streams. In the UK, What You See Is What You Get achieved the highest ever week 1 streams for a country album, topped the country chart and was one of the biggest selling country albums by a male artist in the last decade.

These achievements add to a triumphant year for Combs, who won two awards last week at the 53rd Annual CMA Awards: Male Vocalist of the Year and Song of the Year (“Beautiful Crazy”). He also performed his No. 1 single “Beer Never Broke My Heart” during the live broadcast.

Produced by Scott Moffatt, What You See Is What You Get features 17 songs including the five tracks previously released via The Prequel EP earlier this summer. The EP debuted at No. 1 on Billboard’s Top Country Albums chart with all five tracks charting on Billboard’s Hot Country Songs Top 25—a feat not accomplished by any artist in 60 years since Johnny Cash in 1959. The release also propelled Combs to the largest streaming week ever for a country artist with 73 million on-demand streams (week ending June 13). Additionally, The Prequel’s lead single, “Beer Never Broke My Heart,” recently reached No. 1 on both Billboard ’s Country Airplay and Mediabase/Country Aircheck charts. This is Combs’ sixth consecutive No. 1—a first on the Billboard Country Airplay chart—and his fastest-rising single to date (13 weeks).

Praise for What You See Is What You Get  includes “…there are some cracking songs here, including expertly crafted, hook-laden belters and bourbon-drenched stories of heartbreak” from i News and “Following in the wake of the all-conquering Chris Stapleton, Combs is the latest unvarnished star rising to the top of America’s country scene” from The Sun.

Adding to his monumental year, Combs’ double Platinum debut album This One’s For You recently spent its 50th non-consecutive week at No. 1 on Billboard’s Top Country Albums chart—tying the record for the longest reign atop the chart with Shania Twain’s Come On Over in 1997. This One’s For You is also the most-streamed country album of 2019 so far.

A triumphant return for Lady Antebellum and their 8th studio albu...