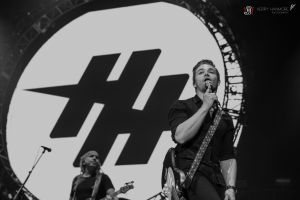 It would be fair to say I’ve not really followed Hunter’s career in any detail before his name was added to the bill at this year’s C2C festival. He’s no stranger to playing the UK as he has toured here before and has a steady stream of UK fans.

His set opened with ‘I Want Crazy’ – an up-tempo country pop song which was a firm country radio favourite and a great opening song.  Personally, I thought he got off to a slightly shaky start which I put down to nerves.  At 25 years old, Hunter is the youngest artist to play the main stages.  However, as his set progressed, his performance improved and shifted up a gear. He told us all to embrace our ‘inner nerds’ as he is the biggest nerd of all, a fact which doesn’t ring true. No nerd can get up on that stage in front of tens of thousands of country loving fans and play the guitar with the confidence he had.  As the crowd really began to warm to him, Hunter brought out one of his ‘best friends’ Charlie Worsham and they wowed the audience with a rendition of Somebody’s Heartbreak.  The two accomplished guitarists really had the wow factor with this great display of guitar work and I would be very surprised if Charlie didn’t come back and play the main stage at future C2C’s. 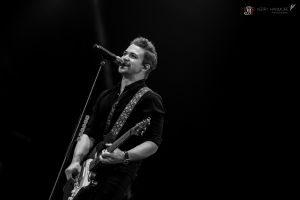 Stand out moments were Hunter’s new song ‘Tell Me’ and an absolutely fantastic performance of ‘Amen’ which had the crowd transfixed as he shredded the guitar.

Hunter has the youthful good looks of a pop star, a great voice topped with the musical prowess of an accomplished rock guitarist. Throw in a little country and there’s enough magic to keep his fans shouting out for more and ensuring he returns to the UK in the foreseeable future.