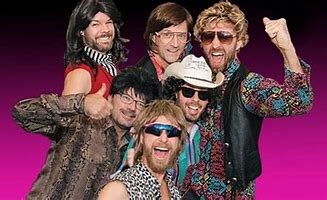 Hot Country Knights burst onto the scene in 2015.

“We were out on the road singing a lot of other people’s hits, and we called them Greatest Hits because by us singing them, it actually made them great,”

band leader Doug Douglason explains. But the fans wanted more, and on the 1st May Hot Country Knights debut album, ‘The K Is Silent’, will be released to the world, in all its honky tonky wonky glory.

Reviewing this album in detail would give away the punch line to every joke, and I’m certainly not going to attempt a serious critique. So I’ll keep it top line. Dierks Bentley’s hilarious parody band have gifted us ten original, stonking tracks. You will cry listening to this album, and they will be the very best kind of tears.

There’s romance, trucks, Wranglers, and rain, alongside every other ingredient you would expect of a ‘90s mockery masterpiece.

Guys everywhere should listen up, because there are plenty of tips on how to woo the ladies: “Pick her up in a pick up truck”, is from their debut single from the album, featuring Travis Tritt. And it’s unclear whether the track ‘Mull It Over’ is a song of romantic regret or an ode to the mullet, but either way it’s full of the nineties-esque swing of steel guitar and fiddle.

The most unromantic romantic song you will probably ever have heard is ‘You Make it Hard’. I won’t be more explicit about the sexual inuendo, but let’s just say I’m not going to be listening to this track with my grandmother. Featuring Terri Clark, the music has the same tone as Tim McGraw and Faith Hill’s ‘It’s Your Love’, but I think the songwriters of this track had a slightly different kind of love in mind. The band claim it’s, “a vocal blend dripping in desire, it simply erupts with passion like a waterbed in the night.” I agree, blushingly.

Of course, any self-respecting country parody album should sing about the rain. Nobody likes talking about the weather quite as much as country folk, even the British; Clint Black’s ‘Like the Rain’, Jo Dee Messina and Tim McGraw’s ‘Bring on the Rain’, and Gary Allen even sung about ‘Songs About Rain’. Hot Country Knights croon: “It rained, oh it rained, it stopped for a little while, and then it rained.” I think we’ve all had a conversation like this, right?

But Hot Country Knights’s signature track, their crème de la crème, has to be ‘The USA Begins With Us’. If country music is three chords and the truth, this really is the actual truth, because USA really does begin with ‘us’. The only disappointment is that the tour, due to kick off in April, had to be cancelled, because fans would have been treated to the full choreographed routine that goes with this song.

Thank you, Hot Country Knights. For never giving up on the dream of the ‘90s. For giving me a ‘go to’ album for the down days. Especially when it rains.

Rob Mayes unleashes outlaw anthem Didn’t Do This On My Own out ...