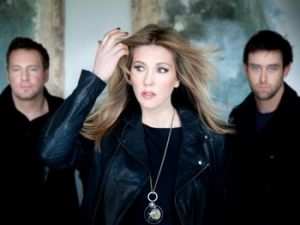 On a lovely sunny afternoon in London, Lindsay O’Mahony from Honey Ryder & fresh from the stage, kindly postponed eating her lunch for 5 minutes to have a quick chat with me.  Honey Ryder are normally Lindsay, Jason Huxley, who had had to rush straight back to Scunthorpe as he was playing another gig that night, and Matt Bishop, who was conspicuous by his absence!

Helen – Thank you for taking the time to talk to me, what have you done with Matt?

Lindsay – Matt unfortunately couldn’t be here, he already had a gig with another band that he was contracted to do and then we got this offer; we were like ‘Oh no we haven’t got Matt!’  But we decided it was something we wanted to do, we wanted to take advantage of such a great gig and we just wanted to do it so a very lovely friend of ours, James Shaw, stepped in and learnt Matt’s part.  So we just thought we could get him and do it because I am originally from London and I hate missing out on opportunities where you miss out on playing such a lovely festival.  So that is why.

Helen – Missed you at FSA Fest this year!

Lindsay – Yes, we couldn’t make it this year, but we are really hoping to play next year.  It is just there is a lot going on with the band at the moment, we are being pulled in different directions, so yeah, next year.

Helen – Perfect.  You played Buckles & Boots Festival this year didn’t you?  How was that?

Lindsay – We played Buckles & Boots yes, it was brilliant!  It is a really lovely set up, an amazing place it is this incredible farm and the people who run it are lovely!  They treat all the acts really nicely, the setting was beautiful, it was a sunny day, it was inside a barn with a bar that has been made, hay bales to sit & drink beer on, it was just a FANTASTIC setting, lovely stage.  Yeah, we loved it.  We played on the Friday night.  They said it was just word of mouth, it just gets around in that area and they said next year it will be double the size, so it is early days for them but I reckon it is going to be a big one.

Helen – Everyone I have spoken to has said it was really good.

Lindsay – It really was fun you know, in addition, when you have got food that is all really nice, like beautiful homemade Angus Aberdeen steak burgers.  It was all really good stuff, it was good food, so yeah, really enjoyed it.

Helen – That makes a difference at a festival as well!

Lindsay – Yes. It wasn’t grotty, it was really nice.  So yeah, they did well!

Lindsay – Oh my god, impossible to say!  Both different.  I mean ..

Helen – And then you wrote in London, opposite a sewage plant!  Let me put that into the equation as well!

Lindsay – Yeah, exactly!  We spent quite a few years in Acton, writing the first album, sorry, not years, months, and Thailand, we got the opportunity to go to be guinea pigs in a new studio.  It was a friend of our manager’s and he built this studio and he said do you want to come & test it.  So we took about 3 months out and we wrote on the beach, literally drinking Singha beers and writing.  We then spent, I think it was a good 3 or 4 weeks in the studio and it was amazing.  So that was a superb experience.  Nashville however, was like a musician’s spiritual home, so going there was amazing.  We got to meet some fantastic people, we got to meet Paul Worley, who is the Dixie Chicks and Lady Antebellum’s Producer.  He invited us out there and hooked us up with these amazing writers, we had dinner with him and some great conversations.  So it is a different happiness there, just as good.  I can’t choose I am afraid.

Lindsay – Oh my god no!  Maybe that is 3rd on the list!  We have still got lovely memories there, as even though the view’s not great, it is where Honey Ryder was kinda born & the songs, so it is still nostalgic.

Helen – So Matt & Jason live quite close together, you don’t live very close to them at all, how do you get together to write & practise?

Lindsay – it is just so hard because if we are trying to get together for even just 1 day, it is like 3 & ½ hours each way, so that is 7 hours just travelling.  So we tend to meet about half way, Leamington or Warwick, around there somewhere.  We then hire a rehearsal room together there, especially if we are writing, or we just do a lot of long journeys.  So it is very hard.  We are writing at the moment, but quite slowly because the geography makes it so hard for us to get together.  We all have young families too, so we are really juggling.  But, we love it so we just keep doing it.  This next album will take longer than the others, but all good things come to those who wait!

Helen – So there is new music on its way?

Lindsay – There is yes.  We have also taken on a new manager and a tour is on the cards, so watch out for that.

Helen – Ok, 1 final question, cartoon character for the day, which one & why?

Keep up with Honey Ryder’s news on Facebook – . https://www.facebook.com/HoneyRyderBand/