Honey County’s three-part harmonies shine in their newest single “Woke Up Tired.” New members Sofie Lynn and Tracy Lambertucci’s voices blend nicely with founding member Dani Rose’s in this relatable song exclusively premiered by Sounds Like Nashville. Who hasn’t woken up tired lately? Written with acclaimed singer-songwriter, Kalie Shorr, the girls hit the nose on the head with this one. Listen to the song here.

“We’ve been wanting to release this song for a while and I’m so excited for the world to finally hear it!,” says Honey County’s Dani Rose. 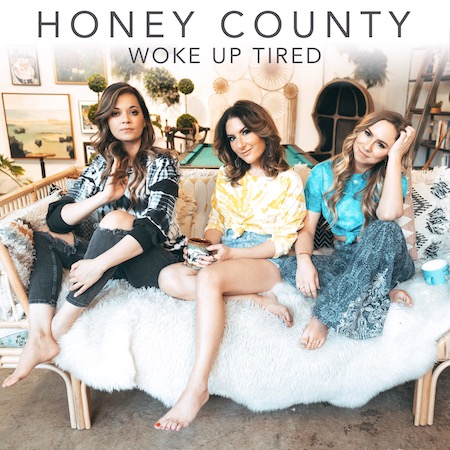 “The band members sing about this welcome predicament while blending their voices into tight harmonies atop upbeat country instrumentation.” – Grace Lenehan Vaugn, Sounds Like Nashville

“’Woke Up Tired’ once again brings together the magic of [Honey County’s] harmonies with relatable lyrics.” – Donna Block, Medium

Honey County has had quite the year starting with Taste Of Country naming them in 5 Artists To Watch in March 2019. Multiple songs have been featured in the television series “Yellowstone” and most recently in “Roswell, New Mexico.” This year they participated in Stagecoach’s livestream “Stagecouch” after having the opportunity to have their song “Country Strong” be the official song of Stagecoach HonkyTonk 2019. To cap off 2019, the girls released “Under Your Influence” ft. Spencer Crandall, one of the songs featured in “Yellowstone.”

About Honey CountyRooted in three-part vocal harmonies, southern twang, and pop hooks, Honey County is a female country trio featuring the stacked voices and layered guitar work of Dani Rose, Tracy Lambertucci and Sofie Lynn. As one of Rolling Stone’s “Top 10 Artists You Need To Know,” the band has maintained a busy schedule both onstage and in the studio, sharing shows with artists like Lady Antebellum, Brett Eldredge, Jake Owen and Chase Rice while also crafting modern, melody-based country songs. With a prestigious placement of their song “Love Someone” featured in an episode of CMT’s “Nashville” as well as Paramount Network’s “Yellowstone” starring Kevin Costner, the band is excited to be working on new music for release in 2020. This is countrywide country music, presented in three-part harmony.