Tickets On Sale Friday, February 15 At 12:00 PM EDT
Including “Trifesta Pass” For Admission To All Three DWP Louisville Festivals (Hometown Rising, Bourbon & Beyond, Louder Than Life)

Hometown Rising‘s incredible music lineup will be led by country heavyweights including Luke Bryan, Tim McGraw, Keith Urban, and Little Big Town, with additional appearances from Dwight Yoakam, Brett Young, Jake Owen, Bret Michaels, Frankie Ballard, and many more. In total, more than 30 artists will play on three stages, including two side-by-side main stages, over the course of the weekend.

With three back-to-back festival weekends in Louisville in 2019, Danny Wimmer Presents wants to ensure all fans have the chance to enjoy multiple events with an affordable and convenient ticketing option. New this year, fans can purchase a special “Trifesta” Pass for the discounted rate of only $229.00 plus fees. The pass allows General Admission weekend access to all three DWP fall festivals in Louisville—Hometown Rising (September 14 & 15), Bourbon & Beyond (September 20-22) and Louder Than Life(September 27-29). Check out https://trifestapass.com for more information.

“I am beyond thrilled to be playing the very first year of Hometown Rising, and to have the opportunity to be part of such a prestigious and eclectic lineup of modern country artists,” says performer Alice Wallace.

Adds festival producer Danny Wimmer, “Hometown Rising is a blend of the music and culture I grew up around, in a place I now consider a second home. While DWP is best known for our rock festivals, I was surrounded by country music growing up in Jacksonville, Florida, and I’m excited to be expanding our portfolio with a genre and a place that are both close to my heart. I can’t think of a better location to launch a country music festival than right here in bourbon country. Mayor Fischer and the Louisville community continue to be great partners as we take this next step in the marriage of great music, food and bourbon.” 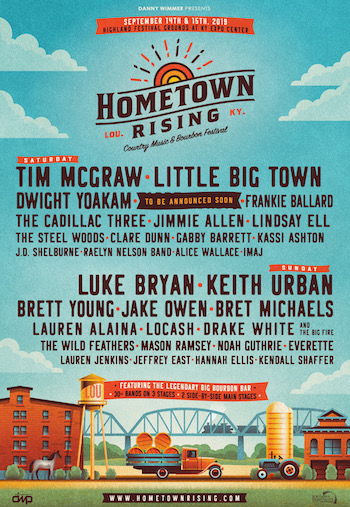 Hometown Rising will be followed by two consecutive weekends of festivals including Bourbon & Beyond(September 20-22) and Louder Than Life (September 27-29). The creation and success of these events recently garnered Danny Wimmer Presents the Greater Louisville Inc. 2018 Silver Fleur-De-Lis Award, recognizing DWPfor its outstanding commitment and achievement in making the Louisville community a better place in which to live and work. In addition, further strengthening DWP‘s commitment to the community, Founder Danny Wimmer and CEO Danny Hayes were recently named Kentucky Colonels by Kentucky Governor Matt Bevin. The Kentucky Colonelsis an independent, nonprofit organization with the purpose of aiding and promoting the Commonwealth and its citizens.

The current music lineup for Hometown Rising is as follows (subject to change):

Initial ticket prices for Hometown Rising will be as follows:

VIP tickets include entry to a VIP hang area featuring a shaded space with dedicated bars, comfortable furniture, and live audio/video streams of the both main stages, front-of-stage viewing of the main stages, dedicated merchandise stand, premium, dedicated food offerings (for purchase), air-conditioned and flushable restrooms, dedicated entrance lanes into the festival and a commemorative laminate and RFID wristband.

The Highland Festival Grounds at KY Expo Center are located at 937 Phillips Lane in Louisville, Kentucky.

We believe in quality before quantity. Please drink responsibly.