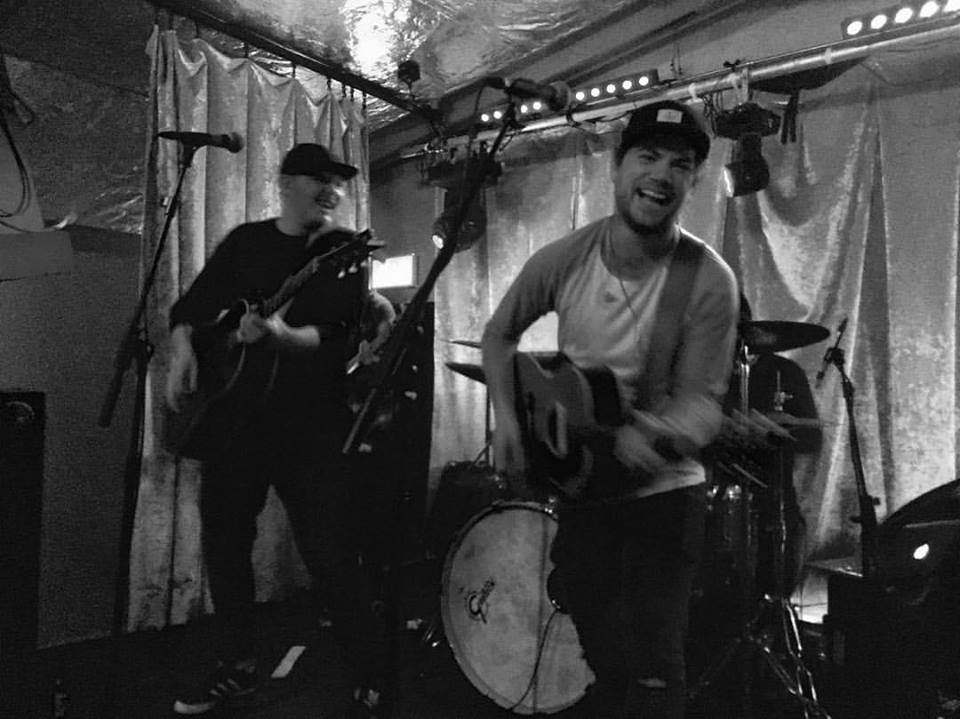 2nd time I have been to this venue, however this gig was upstairs, last time (Arraon Watson) we were downstairs.  There was fairly strict security on the door with all the men being frisked, however, as it was a male bouncer, the girls just had their bags checked!  It was a good size room, not as big as downstairs, but not tiny either.  A real feature of the room was all the disco balls hanging from the ceiling!  There was a variety of sizes and there were loads of them, they looked really funky & added a great touch to the room!

We were a bit late arriving as the notifications said Doors at 8.00, but in fact doors opened at 7.30 and the 1st act, Ceri-Rose came on at 8.00, so as a result we missed the beginning of her which is a real shame as she is someone I haven’t yet seen & what I did see was pretty good.  I do wish these notifications would get the timings right as it is very annoying turning up and the act is already on the stage, you don’t have time to sort yourself out! 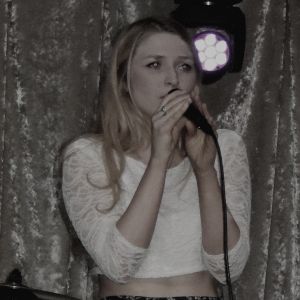 Anyway, moving on!  Ceri-Rose was accompanied by Yannick Van Riet on the guitar (Yannick is part of the band Backwoods Creek, based in Guildford.  He was wearing a Rusty Stag tee shirt, which are designed by Andrew Jones from Journey Home!  Good to see the artists supporting each other!  In fact there were a couple of Rusty Stag tee shirts in the audience!)

Sorry for the red eye, a photographer I really am not!!

Ceri-Rose’s slot was not very long, but she sounded lovely, a very clear and sweet voice.  She sang Ring of Fire and told us she wanted audience participation.  She got it!  The crowd happily joined in, quite loudly!  When she finished she said that that was the best crowd participation she had ever had!  She promoted her EP – Highway of Dreams, just before her last song.  Highway of Dreams is available on iTunes for the princely sum of £3.16!

After a short pause (when we managed to sort ourselves out – coats, drinks etc) Two Ways Home came on.  Two Ways Home are made up of Isabella Mariee from Vienna and Lewis Fowler from the UK.  Isabella was wearing a stunning fringed jacket in bright scarlet, she looked fabulous! 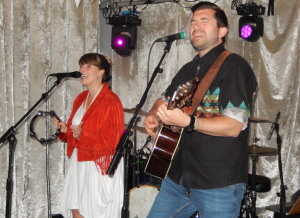 Again, they have a very lovely sound, their harmonies blend together really well.  After their 1st number, they told us they have a new EP coming out on the 2nd June & the next song is on it, the song was written in Nashville with Logan Brill.  Logan was at the Nashville Meets London festival last year and was pretty amazing, so a co-write with her is likely to be a good one and no, I was not disappointed.  Don’t Give Up On Me Tonight indicates that the new EP is going to be very special.

After a new track they said they needed to play an old one – Time Lasts Forever.  This was the 1st single they ever released and Isabella swapped her tambourine for a ukulele.

They then said they needed to play us something to get us in the mood for Holloway Road and played a fast up beat number – I Will Make It Out Alive.  Isabella said “We have 1 last number for you, but 1st I need to plug the new EP”.  Lewis said “Really?” To which Isabella replied “Yes, yes, YES!”  A plug duly followed.

I thoroughly enjoyed this set, again this was the 1st time of seeing this band.  They have been on my radar for a while, just not managed to catch them.  I would certainly like to see them again.  If you are interested in catching them they said they are playing 17th June with a full band and 12th May which is a Songwriter session, however, it looks as if it is 13th May they are playing the Sound Lounge in London, so I am not sure if they got their dates muddled!  Their new EP – Closest Stranger will be available from beginning of June, although it is available to pre-order from iTunes now (again £3.16!)

Another short break and the moment we had all been waiting for Jack Cooper & Rob Gulston hit the stage.  As we were in London they did of course have the band with them (no fiddler though).  This was an historic gig for the guys as it was their 1st headline show!  Really pleased to be there for this occasion.  There was by now quite a crowd, which was fabulous to see.  Jack opened up with “Oi oi London, Who is going to party with us tonight?”  From the roar that came back I would say pretty much everyone in the room!  Little Harder started us off and then straight into Not My First. 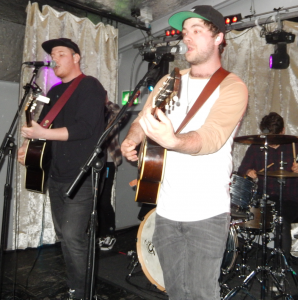 Jack put his guitar down for We Don’t Give A Damn Tonight, unfortunately there were some sound issues during this one!  Jack thanked Ceri-Rose & Two Ways Home and then asked if we were ok if they played us a new one called Cool, didn’t hear anyone say no!

The guys were so proud that this was their 1st headline show, they were pretty stoked by it & that there was a good size crowd in!  During Smoking Gun, Jack again had sound issues and ended up removing his ear piece.  He then complained that he couldn’t find his beer “I don’t think I brought it with me” he lamented!  Before they sang their new single When She Falls, Jack promoted it saying “Stream it, download it.”  A member of the audience shouted out “Buy it you cheap b******s!!  While they were singing this, someone had taken pity on Jack & put a pint of beer on the stage for him!  After they sang the number Jack laughed & said “I got the lyrics wrong!  In Southend we would have been bottled for that!”  He wasn’t best pleased that the audience laughed!!

Root followed.  Jack said “We are back in London .. Oh, when are we back in London?”  He looked at Rob who was on his phone trying to double check, but again an audience member shouted out “28th June.”  Jack confirmed that was correct & said “Yup, with the Pooper Kings”  He actually said Pooper Kings!!  I didn’t realise my nickname for the Pauper Kings had gone viral!!  ;o)

Another new song was next, Under Cover, this was the 1st time they had played this live.  It starts with just Jack and Rob on vocals, their guitars and the band come in later, this is a new style for them & it is good to have something a bit different.

With these new songs in the set, Jack confirmed that the guys are staying, they are not going anywhere, which really is music to my ears!  He also said the audience and their fans mean the world to them and our support is really appreciated.  I Won’t Fall and Let Me Go were the final songs, except the crowd wanted 1 more.  So after thanking the band, We Said So was the final track with the crowd joining in in full voice & as loud as they could!

It was really good to see Jack back on the guitar for most of the set, he has obviously finally recovered from slipping on ice beginning of last year and seriously injuring his arm.  It was quite a small stage so the boys pretty much filled it, didn’t stop Jack bouncing around as usual though!  In addition there was plenty of fist bumping and laughter between Jack & Rob, the camaraderie between these guys and their exuberance on the stage are one of the things that make them so much fun to watch on stage.  As I said, I for 1 am really glad there were several new tracks in the set.  They have been promising new music, but they have also been really busy on the road.  Then again, they are young, they don’t need to sleep!!

If you haven’t yet seen these guys live, please, please, PLEASE do try!  They are such fun!  You cannot stand still for long, you just can’t help dancing along.  Jack did also comment on the number of people he could see wearing Holloway Road tee shirts, I felt a bit guilty that mine was in my back pocket – well, I wanted them to sign it!

Holloway Road latest single If She Falls is also available on iTunes for 99p!

All in all, another really good night of UK Country music (and Austrian of course!)