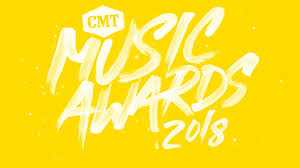 During the craziness of CMA Fest week in Nashville I managed to spare a little time and had the pleasure of attending the CMT Music Awards at Bridgestone Arena for the very first time in my life! Truth is I watched the awards on television last year and saw what an amazing time the audience was having so I promised myself I would ensure I was there to experience it myself it was a goal! I actually managed to secure tickets for up in the Gods for the show but somehow after spending a whole day of queuing up outside on the off chance I might get a better spot I managed to end up in the pit which meant I was within touching distance of the stage for what turned into an incredible night celebrating the last years highlights in country music! Not only was I experiencing Nashville for the first time, attending my first CMA Fest but I was at an actual awards show watching my favourite artists deservingly win awards voted for by the fans, and sing in front of me which was being broadcast on tv! Was this really happening?

Opening the show Little Big Town, the hosts of the night, kicked off the show with an opening sketch posing as news anchors spoofing some of the country artists including Kelsea Ballerini and Jake Owen on the popularity of bachelorette parties in Nashville, highlight was when it crossed over to spoof coverage of the Royal Wedding and Darius Rucker was dressed as Queen Elizabeth and Florida Georgia Lines Brian and Tyler dressed as Prince Harry and Prince William.
Kickstarting the show with their feel good new track of the summer “Summer Fever” the energy of the track got the audience pumped and totally ready for a fun filled night ahead.

First award of the night was for CMT Performance of the Year with many strong contenders included within the category with the likes of Keith Urban and Carrie Underwood for “The Fighter” to Jason Aldean, Keith Urban, Chris Stapleton and Little Big Town for “I won’t Back down” it was surprising to see that it was actually Backstreet Boy’s performance with Florida Georgia Line – “Everybody” from CMT Crossroads that came out on top. The girl in front who was an absolute crazy for Backstreet Boys fan was definitely pleased! Onto the next award which was for Collaborative Video of The Year, presented by Sugarland, for me there was only one winner for this and am very pleased to say that the most deserving song won “What If’s” by Kane Brown and Lauren Alaina and I seriously could not be any happier with how far Lauren Alaina has come since her American Idol days, she absolutely owns this song when performing and am so proud to be a fan of hers!

My favourite award of the night was coming up next because I just knew the winner just had to be Carly Pearce – Breakthrough Video Of The Year for “Every Little Thing”. This girl was the most deserving winner of the night and seeing her win this award and her reaction was the highlight of my night although it really did bring a little tear to my eye. I haven’t commented much on the acceptance speeches as of yet but Carly absolutely stole my heart when accepting this award. In complete shock at winning she went up to collect her award in floods of tears thanking her fans telling fans “She was in the stands with her mom wondering if she would ever get here and now she was freaking out”. As acceptance speeches go Carly stole the show by bringing down the guy who the song was written about and who broke her heart by saying “To the guy who broke my heart, Thank You!” Yes girl!

Next award was for Duo Video Of The Year – Dan and Shay “Tequila” came out on top for this one and again the audience and fans completely got it right! After winning they treated the audience to a performance of the award-winning song and showed everybody just why they deserved to win that award and with the whole audience singing every word back to Dan and Shay it was clear how much the fans were in love with the song.

It was a night full of surprises as Backstreet Boys performed their new track “Don’t Go Breaking My Heart” and there were even performances not inside the arena as Sam Hunt performed track “Downtowns Dead” right in the midst of Downtown Nashville. Throughout the night there were a few acts performing little slots on the breakout stage within the arena. Highlight of this stage was the immensely talented “Lindsay Ell” who chose to completely stun the crowd with her incredible guitar skills and vocal talent in the one-minute slot she only had to play. Going off the reaction of the crowd it may be safe to say that Miss Ell may be playing a full song on the awards next year! Here’s hoping!

Kelly Clarkson also turned up and managed to bring some rock and roll to the CMT awards when she took the stage to perform her cover of “American Woman” the theme song for new Paramount TV Series of the same name. Clarkson ensured she put on a show stopping performance with her powerhouse vocals and also brought along an all-female choir to back her up.

Unfortunately, all incredible nights have to come to an end and safe to say they definitely saved the best performance to last. With a show-stopping all male performance of “Straight To Hell” country gods Jason Aldean, Charles Kelly, Darius Rucker and Luke Bryan teamed together to close the show in style with an incredibly infectious performance of the catchy tune which had the whole audience clapping and singing along.

It’s hard to put into words what an incredible night and honour it was for me to be in the midst of the action of the nights events! It’s nights like that that make me realise why I love country music soo much and always will! Till next year CMT thanks for an absolutely amazing experience!