California-born Hannah May Allison is a Nashville based singer/songwriter you will hopefully have noticed us feature before here at Think Country. Since moving to music city to study at Belmont University she has created quite a buzz, having signed her first publishing deal shortly after graduating and she is now carving a name for herself as an artist in her own right. Blending her love of the pop music she grew up listening to and the traditional country music her mother ( herself a professional country singer) introduced her to, 2020 and beyond look like being exciting times for Hannah May. 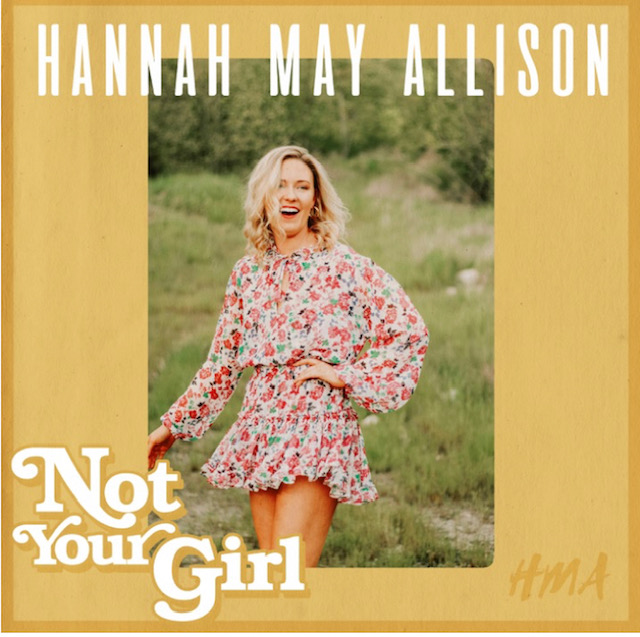 This Friday, 3rd July, sees the release of her new single “ Not Your Girl” which is the first of what she hopes will be at least three this year. It follows on from her three single releases of 2019 and there’s plans afoot for an album release at some point too…..watch this space!

Co-written with Casey Cattie and Lauren McLamb, with Zachary Manno both producing and playing every single instrument, this mid-tempo track looks at the annoying scenario of someone who, while not wanting you as a romantic partner any more,  still looks to you to bail them out in times of trouble …..but Hannah May is a girl who won’t be walked all over and taken advantage of in this way!  “ I’m not your girl any more, the one who would drop anything for ya “  she sings in the soaring chorus……advising them to “ call you mother, call your sister, call your friends” instead. The second verse puts them in no doubt as she explains in black and white how a break up works …..” you can’t leave and still get the perks” .

The twang of what I think is either a mandolin or banjo, evident from the start and reappearing throughout, helps give this track its definite country vibe among what is otherwise more pop orientated production.  I love the echo effect utilised periodically on Hannah May’s backing vocals and when it comes to her strong lead vocals she delivers this gal-power message with attitude by the bucket load.

This is an insanely catchy, fun and relatable song and a fantastic way for this exciting artist to demonstrate her undoubted talent.

“ Not Your Girl” is available to pre-save on Spotify nowhttps://show.co/social-unlock/45ImTHklJqNAWgC2tg8vVd

TC in Conversation with Danielle Bradbery