Nashville-based duo Haley & Michaels (Shannon Haley and Ryan Michaels) will play their first ever UK shows this March as part of C2C Festival, following the release of their full-length album Hail Mary. They will perform multiple times across the weekend at the O2 Arena, including on the Town Square Stage, Big Entrance Stage and Icon Stage.

They have also shared the video for the album’s title track, directed by NFL Super Bowl finalists San Francisco 49ers VP/executive producer Rob Alberino and filmed in the stadium of their hometown team.

Shannon Haley and Ryan Michaels grew up just three miles apart in California’s Bay Area, yet they did not meet until both had relocated to Nashville as up-and-coming singer/songwriters. The duo, who married in 2015 and were named an “Artist to Watch” by The Huffington Post and an “Artist You Need to Know” by Rolling Stone, co-wrote all 12 tracks on Hail Mary, released in November 2019 on Sony/ATV’s label imprint Hickory Records/RED Music.

“Every moment we haven’t been on the road, we’ve spent recording, mixing and mastering these songs until they felt the way we envisioned the day we wrote them,” shares Haley & Michaels’ Shannon Haley.

“We’re releasing a body of work we’ve spent our whole career creating,” adds Michaels. “This album has everything from the first song we ever wrote together to brand new music nobody has ever heard. The past year has been our most exciting and rewarding year both musically and personally, and we are especially excited to get to perform our music in the UK and experience all of the excitement that’s been happening with the country music scene.”

The fast-rising husband-wife duo have since played half-time performances at the San Francisco 49ers vs. Cleveland Browns Monday Night Football game at Levis’ Stadium and the Arizona Cardinals vs. Atlanta Falcons game and made their 3rd appearance on NBC’s TODAY Show. “Hail Mary” has also garnered stadium airplay throughout the NFL, as the chosen song of their team for the 2019/20 season. 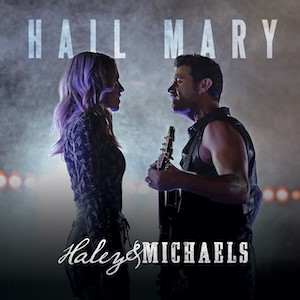 Haley & Michaels grew up in Northern California just three miles apart but didn’t meet until they were both living in Nashville. They had immediate chemistry and have been writing and recording together ever since; they were married in May 2015. The duo has been featured on numerous Spotify playlists, amassing over 30 million online streams, has appeared twice on NBC’s Today and has also experienced great success on SiriusXM’s ”The Highway.” They have sold more than 200,000 digital downloads independently. Haley & Michaels signed with Sony/ATV as songwriters, and additionally with Sony/ATV’s label imprint Hickory Records/RED are set to release their first studio album on November 15. For more information on Haley & Michaels, visit www.haleyandmichaels.com or follow them @haleynmichaels on Twitter, Facebook.com/HaleyandMichaels and @haleyandmichaels on Instagram.