Funded in part by royalties from Little Big Town’s cut of her song ” Happy People’, Iowa native/Nashville resident Hailey Whitters released her 2nd studio album “The Dream ” last year …..and what an album it turned out to be! It was definitely well worth the five year wait since her 2015 debut, ” Black Sheep”, making a slew of ” best of 2020″ lists and bringing her to the fore as an artist in her own right. Perfectly showcasing her incredible writing skills ( which over the years have resulted in cuts by high profile artists including Martina McBride and Alan Jackson ) which combine with Hailey’s heartfelt delivery to really draw the listener in, the twelve tracks tell stories and paint pictures in the most perfect way which for most of us is the essence of country music I’m sure. Tracks including the opener, ” Ten Year Town” which so vividly portray her very real struggle to succeed in the cutthroat music industry, right through to the closer, the thought provoking, lilting waltz ” Living The Dream”. And who can fail to fall in love with Janice who’d “ take vodka over desert ” in this phenomenal track, released as a single, which Rolling Stone and American Songwriter named one of the best songs of 2020 ?

And this Friday, February 26th, almost a year to the day since ” The Dream” came out, Hailey is releasing of a deluxe version of this critically acclaimed album via Pigasus Records / Big Loud Records / Songs & Daughters, ” Living The Dream” . Ok, admission time, I’m not usually a fan of such albums which quite often see artists ” just” adding acoustic or live versions of songs from the original release which while in general I enjoy hearing seem to play on fans’ loyalties to get them to dip into their pockets again. But this time round I’ll make an exception as what we are getting is five brand new songs, and what phenomenal songs too which are intriguingly all collaborations with artists who, as Hailey says “ are responsible for me being able to hang up the apron strings and make music full-time”. She adds “ I wanted to show fans full circle what ‘living the dream’ looks like for me – from where I started with ‘Ten Year Town’ to the bucket list moments that have resulted since I released my record, THE DREAM. I felt it was important to show them what can happen when you don’t give up on yourself.” Yes, I’ll definitely cut Hailey some slack with this release and the concept behind the additions!
With the original album already receiving a lot of attention in the past twelve months, my review concentrates on the five additional songs on this deluxe release.

“Fillin’ My Cup” sees Hailey teaming up with Little Big Town, who as mentioned earlier played a major role in enabling her to record ” The Dream” in the first place. An all female write, it was Nicolle Galyon who had the idea if turning the title (which Hailey brought to the table) into a recipe. Such a hopeful, optimistic song which is something we definitely all need right now, it’s insanely fun and catch and I defy anyone not to be singing along with the chorus after a few listens! Voices blend beautifully on the harmonies with lead vocals shared between Hailey and Karen, and there’s some absolutely brilliant fiddle playing from Eamon McLoughlin. Such a fun video, too, featuring Hailey as a runaway bride. Great to see this getting spins on country radio stateside right now, something Hailey is obviously just a teeny bit excited about and if you follow her socials, you’ll know what I mean! My favourite lines? ” You can’t appreciate the sugar if you’ve never had the salt” and ” I learned that the secret is wanting what you’ve got”

” Glad To Be Here” This time Hailey’s vocal collaborator is one of my favourite male artists, Brent Cobb, who also happens to be her favourite country singer/songwriter of this generation. He was one of the first to give Hailey a big break and take her out on the road with him, on his 2019 “Sucker for A Good Time” tour. It’s the only one of the five new songs which Hailey didn’t co-write but was the perfect expression of how she felt throughout what she describes as the ” whirlwind release of ‘The Dream'”. She went to go to write a song about it, but found out that Cobb, Neil Madley and Brent Rupard hadn’t only beaten her to it but with a song she couldn’t better ….so she asked her friend to sing on it with her. The keyboard introduction brings to mind Dylan’s ” Like A Rolling Stone”, and the relaxed groove with its strong back beat continues throughout the song . Like the previous track, its message is one of positivity and looking for the good in life ….” the sunshine behind the clouds” …..despite the ” nit picking people” who may try to drag you down. Yes, just ” Slow down and take a good look around ” they sing, each taking a verse and harmonising beautifully too. There’s some gospel-like backing vocals in the mix too, stunning, and I love the guitar (I think! ) riff that repeats over and over and the rousing electric guitar outro.

” How To Break A Heart” Interestingly the only song of the five where her vocal collaborators are Hailey’s co-writers…. and who could blame her for using country royalty Lori McKenna and Hillary Lindsey on both scores!! During her early years in Nashville, the pair welcomed her as a no-name song writer and helped her write some of the most acclaimed songs of her career, something Hailey says she’s eternally grateful for and adds that she wouldn’t be where she is today without them. Incidentally, Hillary co-wrote with Hailey on four of these five new songs. It’s the only song that was held back from being available before album release day, Hailey teasing about it on her socials and describing it as a ” super fun release” . For while the first couple of verses may lead you to think this is a total tearjerker of a song things take an unexpected turn as it progresses! Yes, having sung about how easy it is for a guy to leave a girl’s heart in pieces after wooing her, taking her home to meet the family and putting a ring on her hand before then going out drinking Friday night when ” another one catches your eye…you’re the lover you’re the leaver you’re the master of the art” it’s revenge time!! To quote Brandy Clark “ Karma’s a bitch” or as it’s put here, a little more mildly, ” you might want to remember what goes round comes back again”. It won’t be long before the love rat sees her out there looking a million dollars with her arms around someone new (she’s upped her game in every respect ) and the tables are turned…..” tell me how it feels to get a taste of what you are?” . Yes, such a girl power anthem from these three, taking it in turns with lead vocals and of course harmonising perfectly. The mocking “ nah nah nah’s ” of the outro are just hilarious!

” How Far Can It Go?” Hailey credits Trisha Yearwood, one of her biggest musical influences, with being one of the first artists responsible for her looking to move to Nashville and pursue a career in country music. With this song she was looking to create a modern-day version of ” She’s In Love With The Boy”, one of the first songs she ever memorised as a kid, and she and her fantastic co-writers Nicolle Galyon and Hillary Lindsey have definitely succeeded with bells on! Such a ’90s vibe to this really fun song, and having Trisha actually agree to sing with her here was the icing AND the cherry on the cake for Hailey, who called it a real “ done died and gone to heaven” moment. Hailey says of this song that it “ reminds me of something I would’ve been singing along to on the radio, driving my old truck back in high school” ( I love that image, btw!) continuing ” We all know that young couple back in our hometown with ‘forever in their eyes’ , and the feeling of wondering if they’ll be able to make it work when they go off to college “. So many fantastically relatable lyrics, a song with definite universal appeal ….just a few of my favourite lines being ” They’ve got just enough history to hold it together, say they’ll meet half way at least three times a semester” and ” they could go down the aisle, they could go up in smoke”. Just listen to that fabulous fiddile playing in the arrangement too! No wonder it’s got a great reaction since being made available.

” The Ride” The final song is a more chilled track featuring Louisiana native Jordan Davis who like Brent Cobb is an artist who took a chance on Hailey and took her out on tour with him. Alongside his stunning mellow vocals which Hailey is a big fan of this made his inclusion on this deluxe version a no-brainer for her. Such an appropriate song for these uncertain times too, its message to just relax and enjoy whatever unexpected twists and turns life may throw at you makes it the perfect way to round off the album. As the opening lines say, ” you never really know where you’re going even if you think that you do”. The clever travelling references continue, the tag line being ” it’s the road that makes the ride”. I love the pair’s contrasting vocals which come together to harmonise so beautifully too on this laid-back track.

As you can tell I’m sure from all the positive vibes of these additional songs, Hailey is seemingly and quite rightly in a great frame of mind when it comes to her career at the moment. But her immense gratitude for where she is today isn’t confined to the artists involved in her journey, she hasn’t forgotten her fans and released a separate statement to them saying ” I wouldn’t be here without y’all. I wanted to create this project as a way of showing y’all how much you’ve changed my life over the past few years. I have gotten to do things I had given up on believing could be possible for me…. Thank you for making this little ‘ol dream of mine come true!”. And any of her fans who have been following her excitement on her live steams in recent weeks will know that this is a message that definitely comes from her heart just like her music does.

Hailey is celebrating the album release in surely the best way possible ….she steps into the circle to perform at the Opry on Saturday, and has also been announced as joining Midland out on the road on their Texas tour dates this Spring. Have a blast, Hailey! 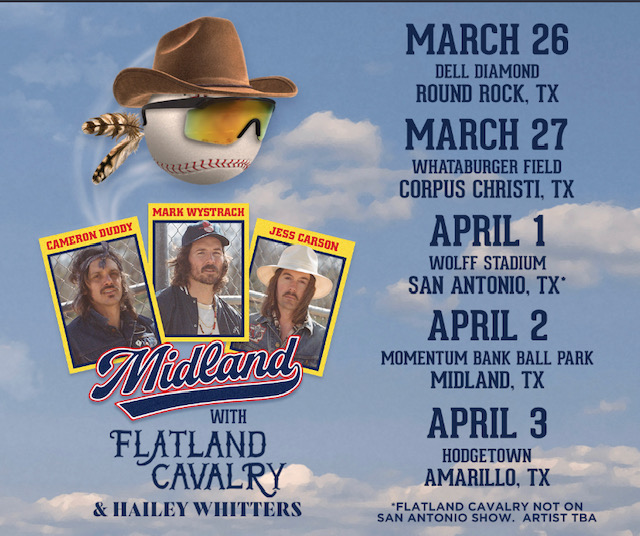 Catching Up With Christopher J. Essex