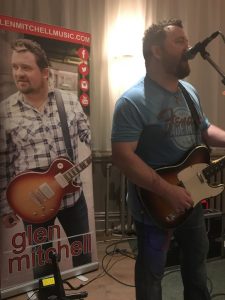 After Glen Mitchell’s recent UK tour with SaraBeth in August, I got to chat to the England turned Nashville resident about his career, influences and, of course, SaraBeth!
CG: I see you trained in classical guitar.  What made you choose a career in the country genre?
GM: My dad had a country band.  I had my first guitar lesson when I was 5 from one of dad’s band members.  It turned into a mandolin lesson though, because the guitar was too big!  I learned the chords to ‘Turkey in the Straw’, and could play it by the end of the lesson.  Then we went out and bought a small guitar.  I continued to play the mandolin as well though.  I went to music school to learn classical music when I was 9.   Night classes every Tuesday.  I studied classical guitar and clarinet.  I hated it!  Haha!  I stayed to take all my grades (till I was 13) but I just wanted to play country music!

CG: Who were your musical influences growing up?

GM: Other than my father, Ricky Skaggs was my main musical influence.  I still think 80’s Ricky Skaggs’ music is the most perfect country music ever.  He’s a great guitarist and mandolin player.  I pretty much exclusively listened to country music though.  Steve Earle.  Restless Heart.  Blackhawk.  Sons Of The Desert.  Lonestar.  Keith Whitley.  Randy Travis.  Alabama.  I hated “hair metal” and really hated the “grunge” thing that was happening in Britain.  It just didn’t sound musical to me.  Then of course, ‘house’ music took over.  Dreadful!!!!  Haha!   I liked a few bands outside of country though.  I love Def Leppard and Bon Jovi.  Oasis were awesome.  And The Beatles are the best band the world has ever known!

CG: What was your Plan B if you hadn’t chosen a musical career?

CG: What was the inspiration for your recent EP ‘Broken’?

GM: It’s just a collection of some of my favourite songs I’ve written over the years.  It had been a while since my previous EP ‘Back In Love Again’ and we had a UK Tour scheduled, so I decided to get some new music recorded for the fans.  I’m very proud of those songs.  Hope you like them!

CG: How did your collaborations as a songwriter & then producer with SaraBeth come about?

GM: I used to play for Lonestar (in 2007).  I’ve known those guys since 1999.  Anyway, Dean Sams (Lonestar’s keyboard player) was spearheading SaraBeth’s whole thing.  He called me to play a showcase in Nashville for SaraBeth in 2013, I think.  Seems longer!  Haha!  Anyway, we hit it off, and started writing songs.  About a year later, the label decided that they loved some of the demos I’d produced of my co-writes with SaraBeth and gave me a shot at producing the next EP.   I’d never produced anyone else before; just my own stuff.  I guess they liked it!  They’ve now released two EP’s I produced and two Christmas songs.  I’m very proud of SaraBeth’s music, and very grateful to her and the label for giving me a chance.

CG: How’s the recent UK tour with SaraBeth been for you?  Any highlights?

GM: The biggest highlight is always getting to see my family.  Musically, my personal highlight was being able to play electric guitar for my UK fans again.  Our other UK tours have all been acoustic.  I love the intimacy of the acoustic shows but I really like to rock out on electric!  So having the full Nashville band with us was a real treat.   We’ve managed to cultivate great crowds in certain areas of the UK (still working on a few others) and the UK crowds are always so attentive for us.  You can hear a pin drop in the ballads.  UK fans really are the best!  So supportive too, that’s always a highlight!  We love coming to the UK.

CG: What do you make of the recent popularity in the UK of country music?  Have you any favourite UK acts?

GM: I’m excited that British people are starting to embrace country music.  I’m especially excited about some of the awesome British talent we have now.  I really want to see more people give British country music a chance – like all those people who attend C2C.  I hate it when people dismiss British country music just because it’s British.  We are more than capable of creating country music every bit as good as our American contemporaries.   Case and point: Lucie Silvas “Letters To Ghosts”.  Arguably the best album out there right now.  It’s been a while since I heard an album that good.  And she’s British (living in Nashville).  If the scene keeps building, and starts generating more money, British acts will start to have bigger and better stage shows; better recordings and videos; better promotion etc, etc – but it all starts with the fans!  Favourite UK acts?  Well, I guess you can tell I’m a Lucie fan!  Honestly, there are too many talented British acts to mention, and I’d hate to miss out anyone!  We’ve had stellar acts open our shows on our UK tours though.

CG: What’s next for Glen Mitchell?

GM: Just gonna keep on keepin’ on!  I was asked to play at the BCMA awards this year, so that’ll be fun.  Honestly, I was disappointed not to be nominated for anything but I guess being invited to play on the show is an honour.  Maybe they have a weird rule that you need to live in Britain to be nominated?  Lucie isn’t nominated either, so at least I’m in good company!  I’ll definitely continue to come to the UK and play live for the fans.  We (SaraBeth and I) are thinking about April 2017 for the next full tour.  I need to get my butt back in the studio and record new music for the fans before then!

CG: Tell me one song you wish you’d written?

CG: Your house is burning down and you can save one thing – what would it be?

GM: As many of my guitars as I could carry!

CG: What is the one thing you really miss about living in the UK? I can bet it’s not the weather!

GM: I do miss the weather!  The humidity and heat here in Nashville is awful!  I miss my family and friends most though.

You can find out more information and keep up to date with all the news on Glen’s music and tours at:
https://www.facebook.com/glenmitchellband/