With all the great Country music to come out of 2013, many were never as excited when we learned that the great man himself, Garth Brooks, would be releasing a new box set.

Entitled “Blame It On My Roots”, see a monstrous box set which comprises of 4 albums of covers, Garths Ultimate Hits album, and 2 DVD’s “Live At The Wynn”, Garths one man show, and his video collection.  Below is just a few of the stand out tracks from each cd.

First up we have the cd called “Country Classics”.  Garth covers a wide range of Country songs, Stand Out tracks for me are from Merle Haggard’s “Tonight The Bottle Let Me Down” where Garths voice just lends itself to this type of lyric with emotion, “Unwound”, a cover of George Straits track from 1981’s Strait Country album.  This could easily be on of Garths tracks as it sounds so like his back catalogue it could fit in with ease and be a crowd pleaser.

There is also “Fishin’ In The Dark”, one of my favourites from this cd, a foot tapping track, a cover of the no 1 track from the Nitty Gritty Dirt Band from 1987. One of the weaker tracks for me is Garths cover of “Great Balls of Fire”, although full credit for his cover of the song, of course made famous by Jerry Lee Lewis, for me it just doesn’t have the powerful performance that this sound deserves.  The cd finishes on a track that has been covered numerous times by different artists, although first released by Hank Williams back in 1952, “Jambalaya”.  I love this track, and for me it’s another stand out track from this cd.

Moving on from Garths selection of Country songs, next up he moves on to “Classic Rock”, the next great cd in the box set.  For me, this is where Garth surprised me the most.  Anyone who has seen him live will know just how much energy he puts into his performances.  From the opener of Bob Segers “Against The Wind”, he shows just what a quality artist he is.  His vocals show, that he can just about cover any genre.  Here we seen him go on to cover Lynyrd Skynyrd’s “Sweet Home Alabama”, the wonderful cover of Stevie Wonder’s “Superstition”, which keeps true the original, and also Billy Joel’s  Vietnam inspired tale “Goodnight Saigon”.

One of the outstanding tracks for me on this cd is Garth’s cover of Free’s 1970 hit “All Right Now”.  Outside of Country music, this is one of my all-time favourites, therefore interested to see how well he covers it, and for me its pure magic.  Also included on this cd is “Addicted to Love” with that classic beat, and a cover of Elton John’s great “Don’t Let the Sun Go down on Me”. Garth belts out this like only he can.

Next up, there is the cd entitled “Blue-Eyed Soul”, and for me one of the better collections in the set.  From the opening of “I Heard it through the Grapevine”, one of Garths mothers favourite songs, as told by the man himself in his one man show, more of which I’ll go through later in this review, it’s clear that Garth holds many of these songs close.  They are sung with such passion, it’s clear to see.  “Midnight Train to Georgia”, I think has to be my favourite track from this cd.  Garth sings it beautifully and gives credit to the original 1973 hit by Gladys Knight and the Pips.

Other stand out classics for me include “Aint No Sunshine”, “Lean On Me”, “Sitting On The Dock Of The Bay”, a cover of the 1968 song made famous by Otis Redding and” Drift Away”.  For me, many of these tracks are timeless and will continue to be with Garths own unique take on them.

The last of the four original cover cd’s is called “Melting Pot” and I think this is the cd that covers those tracks that didn’t really fit on any of the other albums.  Needless to say I think there is something to fit everyone’s taste on here.  Whether it be Simon and Garfunkel’s “Mrs. Robinson” or James Taylor’s “Don’t Let Me Be Lonely Tonight” it is clear to see that Garth had many different influences, which all blend, together to form that Brooks sound we have all come to love.  Stand out tracks for me are “Maggie May” which just shows off Garths rougher edge to his voice, and his cover of “Wild World” originally by Cat Stevens, recorded in 1970. 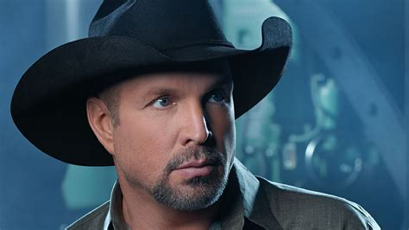 Whatever your favourite genre of music, I dare you not to find something within this collection that will have you singing along and tapping your feet.  It goes to show the many influences that Garth had growing up and which contributed to the Garth we know today, which neatly brings me to add the other album that it included within this boxset. “The Ultimate Hits” consists of 33 songs over 2 cds and 1 DVD that has 33 promo videos from the collection.

It includes hits such as “Friends in Low Places”, “Thunder Rolls”, classics as “The Dance” and “If Tomorrow Never Comes” and spans Garths career to date.

Also in the set, which I was eager to see is “Live at The Wynn”, a recording of Garths one man show from Las Vegas.  Here we see Garth sing a number of songs from this boxset as well as a number of his own.  We travel with him, through the sixties, which he was sure something “funny” was going on, through the seventies which he was sure that people couldn’t finish writing songs and into the eighties where Garth comes onto the scene.  This is a show like no other, Garth, one guitar and a musical journey.  Briefly joined by his wife Trisha Yearwood, for any country fan this is something you don’t want to miss.

All in all, I was impressed by this collection, after all, Garth had been out of the spotlight for such a long time, but this set casts all doubts aside, Garth is back and is better than ever.  Its great value for money and I urge any Country fan to buy it.

In Conversation with Sonia Leigh