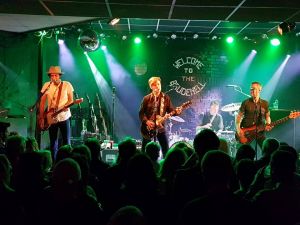 At last….a Mayday Bank Holiday which wasn’t a damp squib! Frankie Ballard & his band returned to Leeds on the final date of his short UK tour & tore the house down with a tremendous one & three quarter hour set packed with great songs, brilliant playing & a real humour from a natural frontman.

This was Frankie’s second visit to Leeds following a successful foray last October. The venue is a thriving club for live music, with gigs played most nights. About 250 fans enthusiastically greeted Ballard & his band onstage to opener “Drinky Drink”, which set the tone for the evening, with some scorching guitar from both Frankie & lead guitarist Eddie Robinson, who has played with Frankie since high school. These two continually traded licks throughout the evening, but were backed by a rock steady rhythm section of Matthew on bass & Travis on drums. 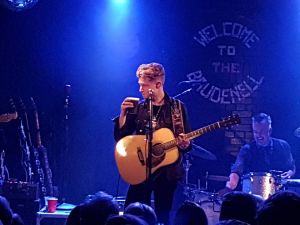 Mixing songs from his impressive back catalogue, the band showcased the majority of cuts from latest album El Rio, including “Good As Gold”, which Frankie introduced as his favourite track from the album. Cue searing guitar solo from Frankie. Highlights included LA Woman (not the Doors song), which is an ode to California girls & is a great rock & roll song, “Little Bit Of Both”, complete with sleazy slide guitar, the Bob Seger penned “You’ll Accomp’ny Me”, “El Camino” which is a perfect summer song & “It Started With A Beer”, which could be an autobiographical slow number, or as he introduced it a “buckle rubber”. Stand out track “Wasting Time” was introduced as a song for those who need some pick up lines. This was a cracking song, with superb guitar work.

Four songs into the set, Frankie threw in a five minute version of “Folsom Prison Blues” which was worth the price of admission alone, a real band number, with great playing. This really got the crowd going!

“Cigarette” saw the band play as a three piece behind Frankie’s vocal & proved how well these guys can play. “Tell Me You Get Lonely” was a real slow burner & was dedicated to those in the crowd who were there last October – a nice touch. Sing along “Helluva Life” brought some audience participation, & “Young & Crazy” again featured great interplay between the two guitarists.

Ballard’s biggest influence growing up was Elvis, & he proceeded to play a couple of the King’s songs in different styles to what we were used to hearing – “Hound Dog” had a funky vibe, leading into a rockabilly version of “Heartbreak Hotel”, complete with a story about how Frankie met his bass player in somewhat unusual circumstances!

“Sunshine & Whiskey” had the crowd singing along & brought the main set to an end. He encored with “You Could Have Loved Me”, a slow song about lost love, which brought proceedings to a close.
My only issue on the night was that Frankie’s vocals were a little too low in the mix. Otherwise, a great night of Americana, country, blues & rock & roll brilliantly played.

I spoke to drummer Travis after the gig, who told me that the band had really enjoyed their time in the UK, & were determined to return on a regular basis to grow their fan base here.
Support came from Foreign Affairs, two brothers from Bristol who played guitars & percussion & went down well with the crowd with their short set.