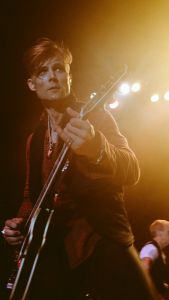 A setlist full of songs from his latest album El Rio and some slick guitar riffs made for a memorable first trip to Germany last week to catch 2 of Frankie Ballard’s shows on his European tour.

Hamburg’s Nochtspeicher played host to Tuesday night’s show – an intimate venue with wooden beams and a bar that ran along the whole of the right side. Munich’s Backstage was the setting for the Wednesday night show, a rock influenced venue surrounded by gorgeous trellis canopies. It was interesting to see the shift in audience dynamics than what I’ve previously seen at his shows – with a much more mixed audience, and a rockier vibe.

Kicking off with El Camino, Frankie included 8 of the 11 songs from El Rio in his set, combined with hit singles from the Sunshine And Whiskey album and a few covers. This is his second visit to the UK and Europe this year, and I loved that the setlist reflected his recent album release, which is already a personal favourite of mine. Highlights for me were Little Bit Of Both and Good As Gold, which were both just as stunning to listen to live. We were also treated to Sweet Time in Munich, which was a last minute addition from a fan request.

The covers broke up the set for anyone not overly familiar with the El Rio album, and were well placed throughout – with The Temptations Too Proud To Beg adding a soul flavour to an already epic country, rock and blues mix. I love that Frankie moved away from the heavy focus of the Sunshine And Whiskey album from the previous tour and showed a fresh sound. The audience took a few songs to get warmed up, but were receptive and cheering along enthusiastically in no time.

The shows were full of energy and Frankie made sure to introduce each member of the band of talented musicians that play alongside him each night. The pauses between songs were full of anecdotes, charm and charisma. A blown amp 3 songs into the Munich show had Frankie likening the changeover to an F1 pit stop and the show was soon back underway. Ending each night on crowd favourite Sunshine And Whiskey made for a cracking finish. There wasn’t an encore but then the show flowed in a way that one wasn’t needed with such a climatic finish.

Not only a country rockstar on stage, but graciously taking photos and meeting fans after the shows, I think we might just have shown the love and support to get another return visit soon!