Multi-Platinum country music artist Scotty McCreery, who has gained fans around the globe and earned two No. 1 hits in the United States with “Five More Minutes” and “This is It,” will return to the UK this May on the heels of his sold-out acoustic tour in England and Germany last October. He will return to both London and Manchester, but due to popular demand, the singer/songwriter will also hold his first concert in Glasgow. In addition, McCreery will be bringing his full band with him for the first time, and playing larger venues, making these his biggest solo international shows outside the US to date. 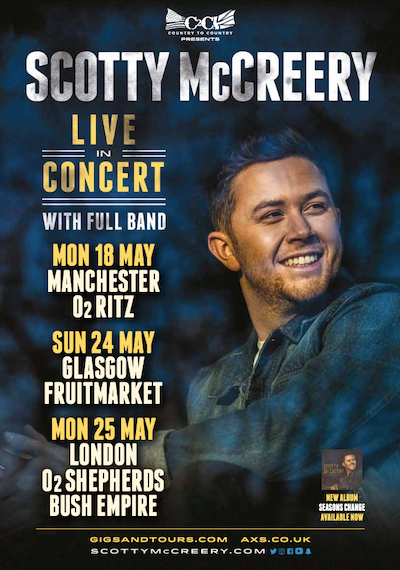 Last October, McCreery’s London show at Bush Hall sold out within minutes of going on sale, prompting a second show to be added which also sold out quickly on the first day of sales. In order to satisfy fan demand for his May appearance, McCreery will perform at the larger O2 Shepherd’s Bush Empire.

Full dates are as follows:

These shows are promoted by SJM Concerts. Additional dates to be announced soon.

“I had such a great time last October and have been looking for an opportunity to come back and bring the whole band. I’ve talked to everyone about how welcoming the audiences were and how they knew the words to every song,” said McCreery. “I’m really looking forward to performing in Scotland on this trip as well as a few more new cities to be announced soon.”

In October 2019, McCreery held concerts in Europe for the first time with tickets selling out in minutes for his tour dates throughout England and Germany, with two shows in London at Bush Hall, one show at Manchester’s Academy 2, one show in Berlin at PrivatClub, and one show in Cologne at Helios 37.

The ACM and CMT Award-winner is currently closing in on the Top 20 of both the Billboard and Mediabase / Country Aircheck US country airplay charts with his current single “In Between” from the No.1-debuting album Seasons Change. After touring with Old Dominion at the end of last year and performing at Luke Bryan’s Crash My Playa event in Cancun, Mexico in January, McCreery will join Chris Young on the road later this spring and summer for the “Town Ain’t Big Enough Tour.” The Triple Tigers/Sony recording artist recently released his first digital-only EP, The Soundcheck Sessions (listen here), which features acoustic renditions of his hits “Five More Minutes,” “This is It,” “In Between” and the fan-favorite “Still.” Check out the new acoustic video for ‘Five More Minutes” below:

Meet Keith Urban Superfan Erin Evans – She Had WHAT From Ke...

New single ‘Life of the Party’ from Ingrid Andress OU...