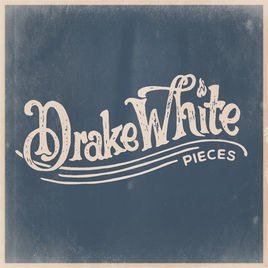 Drake White first made big waves on the scene with his single ‘It Feels Good’, it was his first single to country radio and it started a crazy ride for the Alabaman native. He later, in 2016, released his debut album ‘Spark’ and now we have another release from this vocal powerhouse, titled ‘Pieces’.

Now despite being tunnelled into the Country genre, White is a melting pot of so much you start to lose count. You hear a strong soul and blues feel in his music as well as that country element none of which it seems at times to really stand out more than one another. That certainly is not a criticism, rather an observation of this artist, who I happen to thinks is great and a breath of fresh air to music. Sitting down to listen to the new EP I was intrigued to hear what I would find on there because I already knew there would be a lot of influences wrapped up in it.

We start off with ‘Girl In Pieces’ a great catchy track with a beat that has you tapping your foot from the get go, a clever use of lyrics as he says ‘I see a girl in pieces, let me pick you up…’. Again though you can hear the country route that he has committed to it oozes soul and a beat reminiscent of a reggae tune almost! The lead guitar keeps itself grounded in country whilst the rhythm offers something new and different as the song unfolds.

The next track, ‘Grandpa’s Farm’, brings us back to a southern rock/country feel. Drake’s vocals feel more country in this track but ultimately he has such a distinctive sound that it still is unmistakably him. The song talk about a girl who spends every summer down on her grandpa’s from the city with an upbeat, rolling chorus and the classic vocals that we all know and love from White.

‘Happy Place’, everyone needs one of those, right? Well in this 3mins 15secs of song, I am alright with that being with Drake as he sings a song that if you want you could close your eyes and imagine he is singing right to you! Name one lady that doesn’t fall for that southern charm and big blue eyes, this song is for you. Though unfortunately I think this one might just been directed at his lovely wife! His love song, its still go the bounce to it we love and it also oozes soul in this with choir type backing vocals at times pulling the song together. A smooth guitar lick draws you in and it’s nothing less than I would expect.

The next track ‘Nothing Good Happens After Midnight’, I think the may be my favourite song on the EP. Again a song oozing soul, and there is very little country element in this song, unless you class references to broadway, but sometimes great music is just that; great. It seems a shame sometimes that we have to pigeon hole music into a genre because Drake just shines in what he does best and as I mentioned above that can move around a few different genres. That being said as long as we can keep him here on the country side I won’t be complaining because he is a pleasure!

“When I’m still holding on to you in the morning light, I can’t say nothing good happens after midnight”

Disappointingly, as it is an EP, I only have 5 tracks to listen to. We slip right back into country in this song, and the title of the track really tells you everything about it that you need to know; ‘The Best Is Yet To Come’. It is a slower track than the others but still upbeat. This EP already feels like a summer soundtrack.

I would happily have this blasting out of my car windows, driving through the country roads of Essex, UK….! This is a great record from this incredibly talented artist. I would love to be a fly on that wall in production of theses songs to see and hear how Drake works because I think it would be something really special. It is clear in every song he releases just how passionate he is about his music and it really does shine through!

If you are a fan of Drakes or you are just reading this having not heard of him before… It doesn’t matter! Go out and get this EP! It is sure to hit the right spot!